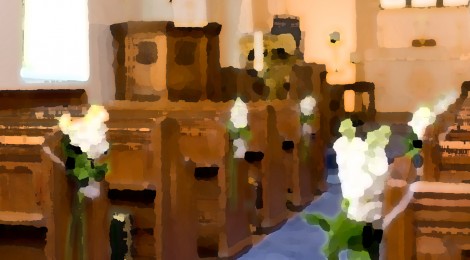 My daughter and I watched the wedding planner.

Ten minutes earlier, a few seconds before we were to enter the chamber where the ceremony was to take place, a fire alarm went off and a recorded female voice ordered us to evacuate (her word) the building.

I refused to budge.

I thought, “I am not hearing this.”

The warning was repeated.

My daughter finally walked away, holding the train of her wedding gown in her hand.

Although I had promised myself that I would not think of it, all the years of single parenthood flashed before my eyes. The graduations. The awards. Her first car. College. Engagement.

She was a child of my later years, fulfilling an unrequited desire to have another child, a daughter.

She was a beautiful infant (silken white hair, black eyes, button nose) but she was never as they say, cuddly.

When she was born, she emitted such a high pitched roar that I wondered if they could hear her at the hospital across town.

As she grew, she screamed a lot. Loudly.

She would refuse to let me put her down. She demanded that I carry her everywhere.

I used to tell observers, weakly, “Someday you will pay to hear her in the Metropolitan Opera House.”

I never tried to rein her in.

I admired her verve, her confidence, her ability to assert herself.

In the years to come, I came to realize that that the force of her will in turn, would strengthen and reinforce me as well.

As we waited outside the hall, the voice once again insisted that we abandon the premises.

I was not leaving.

I held my left elbow bent as if to support her (nonexistent) arm the entire time.

The groom’s uncle came running out and told me he was going to call security.

I remained in place.

I wondered where my daughter had gone.

I saw her walk into the bride’s preparation room, chatting calmly with the wedding planner. Her long, honey blonde hair shone under the overhead lights. She moved gracefully and determinedly.

Finally, the uncle came back and said that there had been a kitchen fire, it had been contained and that we were to proceed.

My daughter returned and we walked forward, side by side, in step.