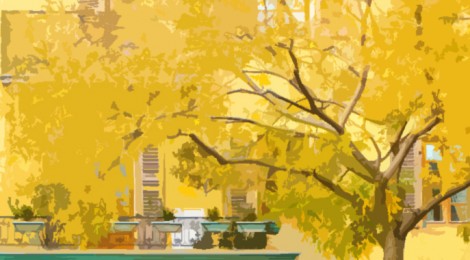 From the street below, one could never tell that the first floor of #7 Mullick Road was a tenement. This was so because of the beautiful Gulmohar tree that stood before it; and when in full bloom, the flaming orange quite naturally was upstaged by the ageing yellow building behind it, leaving it unnoticed. The tree also successfully managed to conceal the yellow grill door of the building – it was almost as if, the motive of the trees’ existence was to hide the shame that the building was.

Right outside the grill door was a pavement, which really was made of large rock slabs that would rumble almost like a premonition when anyone stepped on them. The tenement had three divisions, all three small self sufficient little rooms. Right atop the staircase above the grill door lived the landlady. In her younger years people would speculate that she was mad, but for the past few years, they were sure. She had developed a nasty habit over the last ten years- she would drink her nights away and sing Elvis Presley’s Can’t help falling in love  at the highest possible pitch that she could never actually finish the song without going out of breath and when she did, she would promptly start singing all over again.

Her neighbours said nothing, they were almost unnaturally tolerant but they couldn’t possibly bear to hear the classic ever again, they had most certainly lost all appreciation for it.

On the right to her house lived a delicate good natured girl named Shmie – her name meant nothing. It was nothing but a mere amalgamation of letters. Shmie was beautiful in a very ordinary sense she had long black hair and always wore white. Anyone walking on the road would want to take a second look at her but most often when they did look again they would think there was nothing extraordinary about her. Shmie had lived in the tenement since she was twelve years old. How she continued to live next door to the landlady was always a question. Shmie was deaf and this was truly a blessing, she knew nothing of the landlady’s evening unpleasantry.  To Shmie, the tenement was all she ever knew. She was content with her life and everything she read was her window to the world of sounds. Her eyes said that she knew more than she could possibly hear.

On to the left of the landlady’s tenement was the temporary home of Dulqeer, he had moved in only recently and was already looking forward to the day he would leave. Every time he looked into the mirror, he liked to believe that he belonged elsewhere; he was probably a displaced prince or something of that order. He was ridiculously handsome, and was well aware of that. He had everything possible but luck always ran out on him. The only reason he moved into this rotten tenement was after long deliberation between his pride and his pocket which was finally resolved by the victory of the balding pocket.  He hated the tenement, the ugly yellow paint peeling off the walls, the old lady’s deafening screams and the dirty yellow grill that seemed to safeguard nothing. The tenement for him was nothing but a sore reminder of his poverty.

Dulqeer, when he first saw Shmie, decided that she was a self righteous arrogant girl who didn’t care even for neighbourhood etiquette. She was simply indifferent and didn’t seem to acknowledge him despite the many times he tried to converse with her. Then he heard she was deaf and his opinion about her simply became one of sympathy, he just unconsciously seemed to dismiss anything that would suggest there was more to her as a person.

Apart, from noticing how good looking he was, Shmie, limited her thought of Dulqeer only as one of those many tenants that moved in only for a transitory period in their lives (she was quite right too), and then went away never to look back unless they had left something valuable behind.

However, this changed one night when Dulqeer was standing out on the balcony smoking a cigarette, Shmie happened to look his way and he offered her one. She accepted. It was not her first cigarette she had smoked a few times on the terrace before, a cheap thrill she liked to keep secret. She’d often imagine the bewildered expression on the faces of the neighbours if they saw her. When Dulqeer offered her the cigarette, she didn’t think of him as a temporary tenant anymore, she believed that he understood her, and didn’t treat her differently like others did. She hoped he was here to stay. After all, we are almost always more forgiving than our first instincts about people. The way she smoked, surprised Dulqeer, he smiled at her with amusement and then he suddenly looked irritable as the landlady commenced her evening routine, “Wise men say …” Shmie just continued, enjoying the moment, unmoved by the sound. Dulqeer watched her enviously.

Many evenings were spent like this; they never said anything to each other, both of them were revelling in their own thought. It was something of a perfect understanding between them, undiluted by words. Dulqeer looked at the vehicles that rushed past them, he thought of their blazing red tail lamps that looked like comets of an everyday world. Dulqeer, pondered over the dreams of a better life, how, he would try until the odds were left with no choice but to favour him.

Shmie would look forward to such days, which would end with Dulqeer. Her mind directed her elsewhere. On the first evening, she felt compelled to talk to him but was too reluctant to do so, now, that overwhelming need to say something was done away with and she was in absolute complacence around him. She was growing fonder of him with every silent evening they spent together.

Now, Dulqeer had taken the place of all the bright eyed celebrities that Shmie believed to be her lovers. He was her first real romantic obsession. She would steal a few glances at him, when they met on the landing or at the door below. He would then smile at her with warmth. Sometimes, she would find herself watching him as he left the house and her eyes followed until he disappeared down the street. By now, she was most certain, that he liked her too but she couldn’t muster the courage to tell him or to know what he felt. She was happy with the uncertainty of it all.

While Shmie continued to nurse this fantasy, one evening, as she looked down from the balcony, she saw Dulqeer walking down the street and with him was this beautiful girl. Shmie admired their beauty together and then wondered what he was doing with her. He seemed to be talking to her and she laughed as he spoke.

They had reached under the Gulmohar and within a fraction of a second; Dulqeer had leaned forward and kissed the girl.

In that moment, Shmie’s   reasons for discontent with life had begun. She could feel a rush in her head. The rumble of the rock slabs beneath her as Dulqeer stepped on them, the vehicles on the road rushing past with maddening speed and the tree before her that swayed in the wind. She quickly turned around to hide herself from what she had felt and she heard,

This was the first soothing sound she heard after the cruel sound of her heart breaking and yet, it broke, just a little more as the land lady continued with her song.

The Gulmohar tree in its vanity stood tall against the night sky and the yellow tenement, it stood like it always did, oblivious to the crumbling world within it.