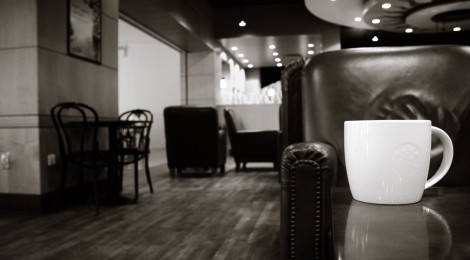 She called me to the cafe next to my office. In the six months I’d returned from England, I hadn’t seen her at a single play like I did before I left. She was a regular. Shyamli. Not beautiful in the conventional sense, but very attractive. A lot of the lobby-waiting crowd gravitated towards her and there was no doubt that she had a long line of admirers. And because I did not want to be thought of as one, I stayed away.

At one of the shows, as I was coming out of the men’s loo, I saw her talking to Dad. She kept looking at me while listening to Dad and so I was obliged to walk up to them. Dad introduced us. Her eyes glinted like liquid diamonds when she smiled. She spoke little but was extremely courteous. That night when I could not sleep because her face lingered before my eyes, I started reading her blog. The maturity and depth in her critiques made me ‘follow’ it. Anonymously, of course.

So I went to ‘meet her over a coffee’ when she called. I could see her even before I entered the cafe. That’s how she is – a show stopper, like they say. She sat fashionably sprawled over the red leather sofa, her long limbs curled elegantly over it, smiling. I thought she had seen me but as I entered and walked up to her, I realised there was someone else she was smiling at. A child. A little girl in a lemon yellow, smocked frock, blabbering as she stood holding the table for support, her pudgy legs wobbly.

Shyamli got up and shook my hand.

A little tentatively, she moved closer and gave me a quick hug. I was surprised because we had not known each other apart from those lobby-waiting formal hello-howdys. She picked up the gurgling child in her arms and sat down. I sat too.

‘How have you been?’

‘Good. See!’ she pointed to the child like pointing to the source of all goodness.

The child tried to free herself from her grip and began to whimper. Shyamli set her down by the table again and the little girl perked up at once looking at me. Show off! I thought endearingly. She shot me the sweetest smile and began to tap the table and babble louder and louder. I had never imagined I would find it in my heart to melt over a little child like this.

We ordered our drinks – her green apple soda and my black coffee.

‘Wanted to see you before I leave.’

I was suddenly disappointed. Though she looked like a blissed-out, happy mother, somewhere in my heart I was so attracted to her that I had wanted her to tell me that she was a single mother, or something. Why had she called me to see her?

‘Where you going?’ I asked, trying to remain calm.

‘Was always fascinated by the sound of ‘Czechoslovakia’. So.’

‘Hahaha,’ I laughed. It really was funny. Like the little nuggets of humour her writing was peppered with.

The baby had walked up to me and was tapping my knee. Shyamli got up and scooped the baby in her arms. She wiped her drool with tissue and when the baby protested angrily scrunching her mouth into such a tight pinch that her chubby cheek puffed out, Shyamli swung her high up in her arms and the little one gurgled in delight. Motherhood suited her more than any other woman I’d seen. She did not look as young as back in the lobby days but there was a serenity and joy radiating from her.

She put her face into the baby’s belly and made a loud snorting noise. The baby threw its limbs about in pure glee. Then Shyamli hugged the baby so hard, it began to wriggle free. She kissed the baby’s mouth and I saw tears glint in Shyamli’s eyes. My god! I would have thought a scene like this in front of an almost stranger a little melodramatic but it seemed so natural now. She set the kicking baby back on the floor beside the table and picked up her bag, ‘Excuse me.’

I saw her turn into the narrow corridor that led to the washroom.

Suddenly, the baby lost balance and in a trice I was beside her, propping her up on her wonky legs. I couldn’t then resist picking her in my arms. She looked at my face closely; then ran her grubby, drool-wet fingers on my stubbly cheek, landing it on my nose and tracing its shape in extreme concentration.

Samir patted me. My former colleague. ‘Hey, you have a beautiful daughter. Congratulations, yaar! Where have you been hiding but? Someone said you were in London. Hey, she looks just like you. Look at those eyes. Exact same, man!’

Just like Samir to bombard me with questions and not wait for a reply. I looked towards the washroom.

‘Hey, I’m here for a client meeting. They are here. Catch you later, dude?’

‘Sure.’ I wanted him to go before Shyamli returned. To avoid more complication.

Shyamli was taking too long. The baby was leaning out of my arms wanting to be set free on the floor again.  So I put her down there and put my arms to both her sides so she wouldn’t fall and hurt herself. She was the cutest little thing I’d seen. I didn’t know I could feel so much love for a baby. Perhaps it is age. Mom-Dad are right about it being time for me to settle down. Imagine having my own bundle of joy like this. Imagine coming home to this every evening; going to work with the strain of these wet fingers over my face. I was smiling.

Still no trace of Shyamli. I turned to look and the washroom door was closed. Could she have locked herself in? Maybe she needs help. I started to walk towards the washroom when the door opened and out came another woman. I looked around, then, walked up to the girl  behind the counter, ‘The child’s mother, who just went into the washroom? Do you know where she is?’

What! My heart pounded against my ribs so hard, the sound reverberated in my ears. I rushed towards the door but was stopped by the baby’s loud cry. Turning around, I saw her slumped on the floor. I ran and picked her up in my arms, trying to comfort her. Looking up, I saw Samir smiling at me from the far end. He gestured a thumps up lauding my fatherly skills, of course. That’s when I saw a piece of paper on the seat where Shyamli had been sitting.

‘Take the baby home. Only you can do it. It belongs to your family.’

Holy Mother! This must be some mistake. Left holding the baby! What should I do now? People were staring at me. Dad! Dad will know. I called him. He didn’t pick. Duh! His phone must be on silent. It was Dad’s nap hour. Oh Dad! What shall I do? Please, please wake up and tell me. What has this Shyamli put me into? Dad I’ve met her only a couple of times in the theatre. No, okay once when you were there. At the hotel.Yeah. I began to sweat. God! Can’t be! Is this how reality dawns on one? I broke into a cold sweat.

Dad had come to Delhi to see me off to London. We were staying the night in a hotel. Morning, around nine, I went out to meet friends. My flight was late night and Dad said he wanted to rest. So I said I would be back by evening and then we’ll have dinner together before leaving for the airport. I met Atul for lunch and soon after that he got a call and had to leave so I thought I would return to the hotel and catch some sleep. It was almost four when I reached the hotel and I was afraid to knock knowing Dad must be napping. I lingered at the door then heard his soft voice. He was talking to someone. There was someone with him. I knocked.

Shyamli was sitting in the chair by the window with a cup of tea in her hand. She asked if I’d like some tea and proceeded to make me a cup talking all the while and telling me how she was visiting Delhi for a wedding and casually called Dad and what a coincidence that he too was here so she made a dash for the hotel to meet him before the wedding. Dad was silent. He’d been silent for many days. I knew, he was going to miss me. When Shyamli handed me the cup, I noticed that her hair was wet. Just washed. I thought it looked beautiful. Wet hair falling over her shoulder.

Dad was silent on the way to the airport. At the departure gate, he gave me a tight hug, unwilling to release. I felt a terrible heaviness take over me then. Tears clouded my vision. We’ve always been close – Dad and I. Everyone says I’ve taken after him in every way – our manner of speech, our love for theatre, our walk, our laugh. We have the same face, the same eyes.

The baby was growing restless in my arms.