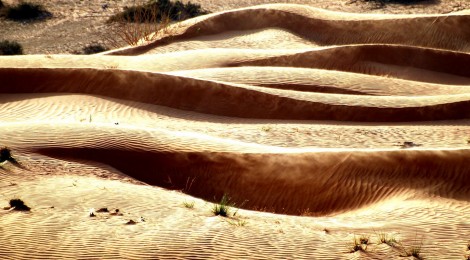 Dancing in the Desert

She stood to the side, almost an extension of the tent, enveloped within the folds of canvas waxing and waning in the desert breeze. Only her eyes were visible. They mirrored the sky at the moment—slate-grey streaked with gold.  Inside the tent, a plump woman also covered fully in black except for her face, sat on a low stool creating elaborate designs on hands and occasionally a foot, thrust in front of her. A train of people were rocking their way towards the snack counter. Laughter floated amidst flashes of light from the stall lending abayas and long white gowns. The excited cries of children amplified the echo of expectation hovering inside the small enclosure.

Two teenage boys were standing in front of her. One of them turned to the other and asked, “Where is she?” She saw him turning and looking all around the camp.

“She must be inside one of the tents.” The other boy replied with a smile.

She saw the boy grinning, “Don’t know, let’s see if we can find out.”

The boys walked away, peering into each tent, laughing and joking.

Salma looked at the sky. A dark stain was creeping, taking over the expansive canopy as the sun furtively pulled away its light. The sand was powdery and soft beneath her bare feet; she dug into them savouring the warmth seeping into her tired soles. It seemed as though she lived on her feet these days, running in the restaurant in the mornings and dancing on the stage in the evenings.

But now there was an opportunity to change all that.

The coloured bulbs surrounding the low wooden stage in the centre flared up. The black rectangular boxes, standing on the four corners of the stage, started vibrating to the rhythms seeping out of it. It drowned the whisper of the restless sands as well as the human voices floating around. A faded carpet, which at one time would have been bright maroon with repeated blocks of orange, yellow, blue and green stripes, covered the stage from end to end.

The sky was indigo now, speckled with white pinpoints. That was her cue. She stepped away from her post and entered the tent. The crowd around her friend had thinned. The older woman looked up from the intricate design she was creating around the ankles of a little girl. “I’m almost done, it’s time for your show,” she said with a smile.

Salma nodded, “My feet are killing me today.”

Salma sighed, “Yes, and also the surge of tourists for the festival…”

“What about the offer?”

Salma shook her head, “Not decided yet…”

Salma walked into to the tiny room at the back of the tent. She took off her gown, thick and opaque, worn over a creamy lace bodice and harem pants. A translucent pale veil embellished with tiny sequins took the place of the dark face cover. Salma took a deep breath and stepped out, an ornate cane in hand.

The belly dancer was ready for her show.

She felt hundreds of eyes on her as she glided into the stage swinging to the beats of the fast-paced song.  The music energised her tired feet. Applause rang around repeatedly. She played with the cane, balancing it on her chest, leaning on it, pointing it. The crowd cheered. The loudest came from the periphery, calling out urgently for her attention.

She concentrated on the rows of people seated in front of her. Mothers and fathers, children, swaying to the music, following the shifting lights painting patterns on the stage, and of course, her dance.  A little girl sitting to the right of the stage caught her attention. With a halo of hair, springy and coffee bean coloured, her chin resting on the cup of her right hand, she sat with her eyes wide open. Just like her seven year old did, when she used to read out stories at bedtime, when their lovely apartment in the city centre was still standing. She blinked hard and forced her smile to stay on her lips.

The song slowed a little and she retreated to the side to place her cane on the floor carefully. Minutely carved, it was lightweight and ornamental unlike the heavy steel ones that helped her husband move about back home.  Thankfully, the surgery had helped him walk again. The song ended and she retreated to the tent amidst applause. Dina had a bottle of water ready for her.

Her husband did not know that his surgery was possible so soon only because of her extra income.

“You don’t have to dance for a living anymore.” That was what he had said just after their marriage.

No words she knew then were enough to make him understand that, to her, dance was more than a means of livelihood.

As the second and final song tapered to an end, the crowd at the back thinned. Salma saw the crowd shifting towards her friend’s now empty tent. The lights went out suddenly, and Salma ran towards the little room near the entrance. Dina had placed her bag behind the door as usual. The clamorous crowd in the henna artiste’s crowded tent did not pay any attention to the hooded figure in black striding out of the gates a few minutes later.

“You have to report at the boat at three, the cruise goes on till eight.” She would be part of a team, and could decide the number of times she performed. The sum mentioned was double what she was making now, both jobs combined.

A short horn directed her attention to the cab parked on the slope of a sandy hill a little in front. By morning, one more instalment towards the loan that paid for her husband’s surgery would be in her account. She could repay it fully within a few months’ time. She could get a new apartment. They could live together as a family again. As Salma walked towards the car, she felt the gritty particles of sand dancing on the desert floor.