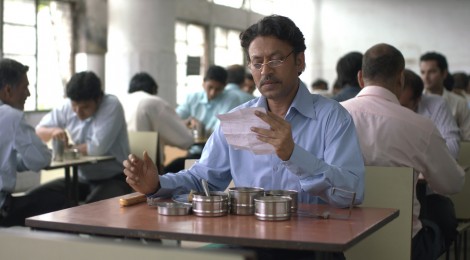 A Look into The Lunchbox

Even something as simple and common as a cloud has a silver lining. So does the otherwise seemingly mundane Mumbaiya middle class love story of Ila and Sajan. The two routine lives of two not-so-extraordinary individuals, dealing with the usual middle class problems suddenly intersect due to a fascinatingly rare mistake made by a dabawala.

As the mistake sets things into motion, these two begin to awkwardly court each other through the classic form of middle class courtship; hand written letters. Contrasting to the trend of labelling such a gesture with terms like “personalisation” or “unique”, the circumstantial exchange of letters seems only natural. In other words, those in love don’t necessarily sing nor dance to express it. At most, they sneak in time for listening to romantic Bollywood numbers like Pardesi Jana Nahi or Saajan, here played on a cassette. Honestly it’s been ages since anyone has used the object or mentioned the word ‘cassette’ in present times.

With the simple act of employing film songs from other old Bollywood films, to feel and express love, rather than have soundtracks of its own, Ritesh Batra’s “The Lunchbox” establishes itself as an outsider to the regular products of Bollywood.

As in the way an unsure Ila sprinkles spices on recipes suggested by a nosy and empathetic neighbouring auntyji to win over her reluctant husband, the film is sprinkled with doses of subdued everydayness and sometimes unspoken insightful moments that help the viewer feel the film while watching it.

The protagonists don’t seem to find reasons to heroically embrace death for the sake of love but simply look life in the eye and quietly sigh. Just like we all do.

Thus with sighs, an aging Saajan Fernandes (Irrfan Khan) inhabits crowded trains, buses and a crumbling house, while a desolated Ila (Nimrat Kaur) occupies an empty apartment.  The common monotony of their lives is, however, broken by an occasional visit by the dabawala with a lunchbox – Hers, by creating and putting something new in to it everyday, his by eating something new out of it everyday.

This shy relationship, voiced entirely through small chits and letters, slowly develops into love. It is a kind that is never explicitly uttered. Batra chooses to intimately whisper this into our ears rather than proclaim it with a band-baaja.

Meanwhile our Deshpande aunty (unseen) and Sheikh (Nawazzuddin Siddiqui) are struggling equally to match up to the emotional turmoil the ruthless city hurls towards them. Very much as in Kiran Rao’s Dhobi Ghat,  the characters in The Lunchbox too, have their set of dreams. While one’s being to see her husband up and about while the other trying to blend into his new government job in spite of being an orphan and not to mention under qualified. The characters come across as agents of innocence who give this unsure love just the push towards its fulfilment.

Batra goes easy on the scissors, like Tarkovsky, as he lets the shots linger without too many cuts, for us to absorb the intensities of the moment.  The content of the letters, ordinary at first like the life they lead, slowly compels you to muse over the details like each of the eager protagonists, as they stumble into bond.

They never exchange numbers or addresses. It is as if it almost allows them to relish the little tingle of excitement, like the incredible adventure of the food they share, upon receiving a new letter each day.

For audience, who are used to the texting phenomenon over the phone or comfortable with their regular emailing schedule, may find it hard to associate to this pair’s unconscious attempts to avoid any kind of addition to their already existent mechanical routine of a pressure cooker and washing machines or the buses and trains. However it is this decision of theirs that make The Lunchbox a possible narrative.

The indoor loneliness of the middle class neglected housewife merges with the outdoor drudgery of the office goer in to a blend of a unique companionship. Both Ila and Sajan come to life with the ease that Irrfan and Nimrat show onscreen. Nimrat should be acknowledged for holding her own against the likes of Irrfan and Nawaz. She’s the one who provides the film with just the right touch of emotional vulnerability and strength.

Apart from the childish whims of creating a Bhutan angle out of the blue and a half-cooked episode of Ila’s husband having an extra-marital affair (almost as if to hint towards Ila’s letters to Sajan as a justification of her acts for the select orthodox audience out there), The Lunchbox is crammed with a hearty diet for the emotions, senses and the intellect. It also in a not-so-obvious manner seems to be a tribute to the throbbing presence of the hardworking dabawala and their dabas who string lives together in Mumbai.

Ritesh Batra has indeed ‘delivered’ his first feature film to the right viewers and has earned a promising career ahead.