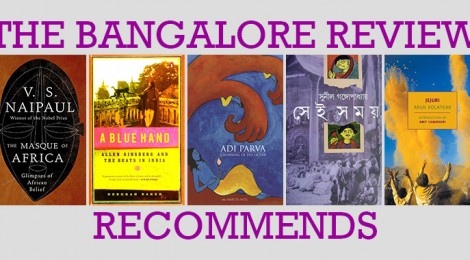 March, 2014 · by Maitreyee B. Choudhury · in Columns, TBR Recommends

1. The Masque of Africa by V. S. Naipaul
Naipaul’s book travels through the African continent to various places like Uganda, Ghana, Nigeria and finally to South Africa. Naipaul talks to different people and traces the culture and religious beliefs of the people and the land.
The book opens in Uganda, giving the readers a glimpse of the Mutesa, his life and the interesting tombs that the author sees during his travels. His descriptions of Kasubi, its history and other Bugandan Kabakas or the descriptions of West African forests and the strange fetishes that are still worshipped in them towards the end of the book, often make the reader feel like they were traveling with him.
The writing is lucid and characterized with his dry humor in places and surprisingly easy to read as well. To someone who may not be familiar with the African culture and belief, the revelations here might often seem fantastic making it a tremendous journey for not only those interested in the cultural aspects of Africa but also for anyone with the desire to discover. Largely anecdotal it makes the telling of African culture and beliefs feel like one magnificent story. For me the book traced a curious journey into the heart of African belief.

2. A Blue Hand: The Beats in India by Deborah Baker
The book as the tile suggests traces the journey of the Beat’s( with Allen Ginsberg as the primary figure) to India. While to some it may seem largely like an account of the drugged-out pair of writer-poet, Ginsberg and his partner Peter Orlovsky, the book is in fact a fascinating narrative of Ginsberg’s spiritual quests as well as his growth as a writer. The book takes the reader though an intricate journey of other India. Ashrams, opium dens and burning ghats of Benaras, somehow manage to showcase Indian philosophy, poverty, poignancy and creativity in different capacities through the eyes of these traveler poets and how they are changed in their own ways post their travel. Meetings with the Hungrialist poets of Calcutta, the Bauls of Bengal, discourses with the Dalai Lama and the alternate telling of the stories of rebellious Southern belle Hope Savage and Jack Kerouac, amongst others of the Beat generation. Their writings, the roller coaster emotions that they go through, a glimpse of their letters, personal notes, etc make this a tremendously thrilling book. Deborah Baker, who was previously an editor does a stupendous job of handling a huge range of information that the book shares.

3. Adi Parva – Churning Of the Ocean by Amruta Patil
The first impression that Adi Parva has on the reader is that it is a book of tremendous passion. Illustrated with beautiful paintings by the author, Adi Parva is the story of the churning of the ocean and a retelling of the beginning of the Mahabharata and how it came into being. Just like her paintings, the book has an element of grace and beautiful aesthetics that often leave you gasping at the scope of her literary oeuvre.
Ganga, Vishnu, Shiva are all characters in this mythological tale with the personal perspective of the author. As such the book no longer remains only a mythological tale retold but becomes a story unto itself, largely told through the author’s own understanding of the texts. Small perspectives are added in terms of dialogues throughout the narrative, to the final build up. As a beautifully illustrated book, it makes for a worthy gift to any book lover too.

4. Sei Somoy by Sunil Gangopadhay
Set in the fascinating backdrop of the Bengal Renaissance in the 19 th century, the novel traces the journey of some of the most distinguished characters of that time. As a reader I was delighted to find characters like Ishwar Chandra Vidyasagar, Debendranath Tagore, Michael Madhusudan Dutt, amongst others, set in a story told well. People about whom, one had till now read about only in boring history books.  Subjects such as the Tawaif culture, song and music are largely touched upon. The wealth of the aristocratic Bengali is often commented upon as is the intellectual richness of the young and bright minds emerging from the city colleges in those times. As a book it is an important account of the times, the culture and in certain ways the history of Bengal and British India, while also highlighting how social evils were tackled.

5. Jejuri by Arun Kolatkar
Some extremely simple, yet haunting poems make up Arun Kolatkar’s rather smallish book Jejuri. The poems in this collection, speak of Kolatkar’s visit to Jejuri, a pilgrimage site in Maharashtra and shows the poets journey in trying to observe and perhaps find the spiritual, in what seems to him a complex and rather degenerative world. Dogs, beggars, old people, temples all become characters in his poems. If Kolatkar’s metaphors stay with you because of their jarring abruptness, the deeply gentle subtle voice also caresses. Comic, crisp, sad and extremely detailed, Jejuri is a fascinating and unique voice for poetry that lives on with the reader, it did for me.

[Every month, The Bangalore Review recommends a reading list, also mentioning in brief why each book must be read. This month’s list has been compiled by writer, Maitreyee B. Choudhury.]