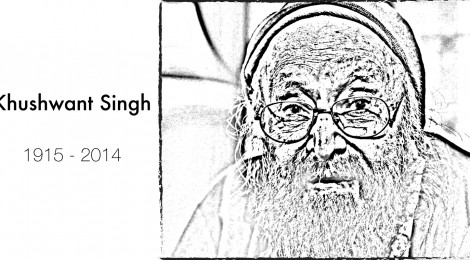 April, 2014 · by Soumitra Dasgupta · in Literature

Khushwant Singh was a raconteur par excellence. The imagery is that of an avuncular man, having a bagful of assorted stories covering a wide range of subjects and recounting them with obvious glee. In narrative form, these stories read like an after-office jaunt with friends in a tavern. This laid back approach to writing is as deceptive as the man himself. These stories, rather columns, are but a cornucopia of the man’s rich experience gathered over a period of time spanning several decades. Decades of rubbing shoulders with the who’s who, and countless hours pored over ponderous books, often working indefatigably upto 15 hours a day even when he was well into the nineties. Unlike most other men who live that long, he had the unfair advantage of retaining his mental faculties till the very end and a stamina prodigiously built on rock solid foundation of exemplary work ethic.

Obviously, attempting to strait-jacket someone as prolific as he was, would be a futile exercise but nonetheless we can examine his works through a broad lens and deliberate on how he became one of India’s most widely read authors. A significant portion of his columns have been devoted to discovery of the self, of Indian-ness and other various aspects of life. Often the tone has oscillated between differing moods, of being sombre and at times light. There have been some incredibly poignant pieces like the one he wrote as a farewell note to his colleagues in Illustrated Weekly, where he worked for nine years and was just a week away from retirement when he was abruptly and unceremoniously asked to leave. Legend has it, that Khushwant Singh quietly got up, collected his umbrella and left without a word. There are raucously funny ones like the one on why money is called filthy lucre. How he spent a sleepless night, guarding a wad of notes and ended up with a cold and dripping nose. Writing provocatively and never one to shirk away from challenging holy cows, he brought disdain and irreverence almost to an art form. Despite the fact that he was always surrounded by powerful men and beautiful women, there’s a touch of melancholia in his writing, especially about old age and its many challenges. Its best captured in his writing through these immortal lines : Jawanee jaatee rahee / Aur hamein pataa bhee na chalaa / Usey ko dhund rahey hain / Kamar jhukai hooey. Youth had fled / And I did not know about it / I seek for it on the ground / With my back bent double.

He has profiled several interesting personalities through his work, including the likes of Amrita Shergil, a woman of great beauty and reputedly with an insatiable appetite for promiscuity. He met her twice and on both these occasions, there had been verbal exchanges which left a permanent impression in his mind. The likes of RK Narayan, who was deceivingly modest, a façade behind which resided a very high self-esteem and an inflated ego. Nirad Chaudhuri was actually a friend, who according to Khushwant Singh towers over all intellectual geniuses of contemporary India. These sketches have been brief and relate to instances where there was interaction with the subject, an opportunity to observe and write about some of the idiosyncrasies often exhibited by great men and women.

The weekly columns can best be described as hors-‘oeuvres that he dished out quickly and easily, even as he gave us deep insights into his political and religious beliefs (a self-confessed agnostic). Emergency of 1975 was a blot in the country’s history and he was one of the few intellectuals who supported it, for which he earned much criticism. His columns on this, later compiled in book form, explains his stand and why he thought it right at that point in time. Many years later, when Mrs Gandhi ordered Operation Bluestar, he promptly gave up the honour which was conferred earlier by the Prime Minister. His political writings are not inundated with technicalities and make for very insightful reading on the conditions of the country through the decades. Fearless as he was, he has been unsparing to many political adversaries. As an observant outsider with an acerbic wit, he could see things and report them, which other journalists of his time found difficult to match.  All throughout his life and because of his roots, he had an active interest for studying political figures, across the border, and wrote about them with equal aplomb. In one of his earlier columns, he says, that whenever he travelled to Lahore, it always occurred to him, that they were 30 minutes behind us and so watches had to be re-set accordingly, but in every other field of development : agricultural, industrial, educational and social, they were at least 30 years behind us. It did not make sense, as essentially Pakistanis were the same people as we were, man for man, perhaps physically fitter and most importantly, bound by a similar faith. Yet, for some inexplicable reason they had slowed down and stagnated.

Though his mother tongue was Punjabi and he was culturally much aligned to Urdu, but chose to write in English and remain soaked in Punjabi, Urdu and European literature all throughout his life. Despite his Sikh background, his views were unrepentantly agnostic and he continued to poke fun at pomposity and self-righteousness amongst the country’s numerous “godmen.”

Khushwant Singh was equally prolific in translations. He read much, and translated many. For example, ever since Shikwa (The Complaint) was first recited by Iqbal in 1909 at Lahore, it had remained controversial but oft quoted. It’s theme is the poet’s complaint to Allah for being unfair to Muslims and lauding the role of Muslim warriors. The complete poem has thirty-one stanzas, which was translated by Khushwant Singh in 1980. In the past, it was common amongst poets to compose verses on the twelve months and relate it to human nature and its various moods. There have been several, and notable amongst them in the Punjabi language is the one by Guru Nanak, believed to be the last of Guru’s compositions. The non-Punjabi reader is treated to such rare gems through English translations.

Partition, was the bloodiest carnage in the history of independent India which dispossessed 12 Million people on both sides and directly accounted for the killing of half-a-million hapless victims. When monstrosity of such barbaric proportions strike humankind, thinkers and writers abound, are greatly moved. Oft it is seen that out of the depths of sorrow, human misery and decrepitude, comes out some of the finest works of literature. Arguably, “Train to Pakistan” is one of Khushwant Singh’s best novels, and must surely rank amongst the top 20 works of fiction ever produced by an Indian, in the English language. The evil that men are capable of, quite moved Khushwant Singh and this was his initiation into writing novels, in the early 50s, besides his career as an investigative journalist.  Khushwant Singh, though an Anglophile, has narrated an impactful story, as seen from the eyes of an Orientalist. To an Indian reader it is familiar dabbling and to a foreigner, it’s a thoroughly readable account of life in Indian villages, around the time of independence. Peace is only a chimera, and the veil can be ripped apart just as easily, only to reveal the evil unrest that bodes within humans.

Khushwant Singh has written other notable novels, “I shall Not Hear The Nightingale” is another such. According to the author, this is his best, but then again it is debatable. Like his earlier novel this one too delves very deep into the Indian psyche and comes out with rare gems. The book explores a manner of sycophancy that existed in Indians during the British Raj. We look around and see traces of it even today. It does insurmountable damage to Indian character and this has been depicted very well in narrative form. Just as he wrote several other brilliant novels like Delhi, Burial at Sea and Sunset Club, which have all left a mark, one such stands out for a different reason altogether – The Company of Women. Like his other works of fiction, this too is an exploration of relationship between men and women, but written in a style bordering on pornography, it does not do justice and reflect well on the man’s obvious class and erudition. But, then again every great writer is entitled to one badly written book, a bete noire of sorts.

Bachi Karkaria pays him a rich tribute when she says, that the houris in heaven must be trembling as they await the arrival of India’s self-anointed dirtiest old man.  Most certainly, this man had the most envious repertoire. Erudition was just one of many. May his tribe grow in numbers. R.I.P. Khushwant Singh.