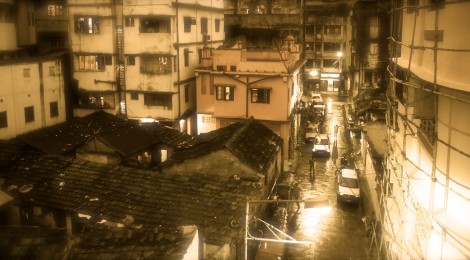 Hurriedly Brewed: The Taste of a City

Ten in the evening, the sun has gone down since ages now, all that remains of the light is encapsulated in the halogen lamps placed at a seemingly random order. Beyond where I sit is the bust of a 19 th century great. Pigeons have immortalized him, his expressions priceless since then. Ganga scrolls by; the evening wind is a witness to that. I watch the immense energy of the little flies around the lamps again, Red is their colour. The raw skies around, itching to burst over, echo the colour somehow, walking around like dreamers on no particular mission. I look at my Coke laced in Rum, Black from the city’s desire to hide. In far away homes, while I and the sky converse, children cry in heat and hunger, someone will swear at the slow trams, God will turn a joker once again. I become Calcutta on its streets and as the angel atop the dome in Victoria stretches its hands to try and touch something unattainable, I think it is pretty much echoes the story of the people inhabiting the city. Cities often change people, you are drowned in the soot, without the idea of what it makes of you or who you emerge off it, if at all you do. I’m reminded of Ritwik Ghatak’s short film, ‘Bari Theke Paliye’ and Calcutta through the eyes of a small boy. In many ways the city spills over, from buses, from trams, the sweat of rickshaw pullers, you wonder then what conclusions the runaway boy had come to wandering around in an alien city, whether it had corrupted him, made a man of him, taken away his innocence, paved the path for a poet in the folds?

I am in Hatibagan, North of Calcutta, this is an old locality. Walking down the streets one is reminded of theatre houses that would light up many evenings, the green curtains that talk of sordid love stories, from cheap tin spoons that cut across my cutlet and yours. I look at it like an outsider now, this city, pieced together like a work of great art, callously strewn aside in the haste to rush on to bigger things. I’m reminded of –

You and I, might have met
in some nondescript coffee shop, tonight-
with the curtain of a thousand voices
and privacy in each public clutter.
In green curtains
sordid, from yesterday’s love,
rich in Bacteria,
traces of carelessly strewn Sambar,
running down your guilt free mouth-
hurriedly brewed coffee,
carelessly downed cheap whiskey,
half eaten bones,
lingering of another’s cheap smell-

In bold public stares
of his intimacy in you,
where cheap tin spoons
cuts a tongue,
where the stench of bitterness is loud-
There Calcutta loves.

From, ‘angelheaded hipsters burning for the ancient heavenly connection to the starry dynamo in the machinery of night, who poverty and tatters and hollow-eyed high sat up smoking in the supernatural darkness of cold-water flats floating across the tops of cities contemplating jazz’ street life weaves a fascinating pattern in the minds of those who want to see beyond and more. If I can see Ginsberg’s famous lines etched out ‘through the negro streets at dawn’ in Howl, I can imagine Shakti Chattopadhay crying out, ‘Abani bari acho?’. You wonder if poetry answers back in some dingy lane of Calcutta and the smoky death haze of literature arising out of the edifice of Nimtala burning ghats, will sustain.

‘Manhattan’ by Woody Allen springs to the mind. It had been a cold winter night when I sat mesmerized by the opening scene, of New York filled in Black and white, beautiful, powerful, there to stay. Through Woody’s narration of the city you see the high rise buildings, people walking, snow covered streets, buses, people, lights, grandeur, a city and its life. A viewer is mesmerized, even while the voice seems to take a back seat, the story too perhaps, the fact that a city moves in a zen like manner, while others breathe, revel and even write about it or screen it as a film somehow seems tremendous and yet there have been so many eulogies, profanities that have ceased to describe what the mind has felt, of such a place that refuses to die, refuses to change character, only remains.

So while the sun would set in New Jersey or in Calcutta, something don’t change. One is filled with the raw overpowering sense of enormity, of huge bulging proportions that overcome, of a linger in every sunset and rise, where all along the roads that lead to it or not, one is filled with a sense of dreaming, even while the lights fade one by one, the river dries, the soot overpowers, the forlorn becomes a habit and on someone’s radio Dean Martin takes a bow, I think of a city that has lived, the many that have lived with it. These are cities that somehow live, they never die, or their spirit doesn’t. The children grow up crying and swearing in the same dreariness day after day, there is stillness in the beyond and in that a night ends, you and I we live.

The first call of the Azan, the smell of Rajnigandha and fake roses, the city lives on, as do we.