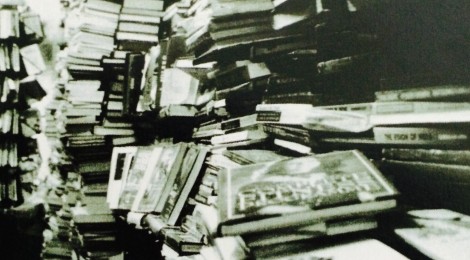 I suppose that it seems rather extraordinary that I have spent my entire life surrounded by stories but have never before been tempted to pen my own. I am Vinod Patil. I ran a modest bookstore in Bangalore for some thirty years in the tiniest room imaginable on the corner of the poshest street in the city.

I do not remember why I decided to name it Pioneer Bookstore. Perhaps because moving to Bangalore, especially from the hub that was Bombay, was then unprecedented, considered even to be suicidal in the exalted Bombaikar literary circles that my illustrious brother often frequented. But Pioneer Bookstore it was, and I can clearly remember bringing back the freshly painted sign from the shop and obsessing over it for hours. I had Narayan, my landlady’s son, hammer it up for me. Years later, he was kind enough to say that he had helped make history.

Pioneer Bookstore began with one desk and five racks for books lining the walls. There were two seats positioned at opposite ends of the dimly lit cell and precariously placed stacks of papers dangerously close to the entrance. It remained that way right up until its final days. The door opened into Mahatma Gandhi Road, one the oldest roads of the city, never still even for a second, but never too busy to pop in and say hello. By god, I was proud of it.

I remember the first book I ever bought as a child. Sanjay and I fought for it for ages, and he eventually won. But I was always the faster reader, and I finished it two days ahead without his knowledge. Sanjay threatened to spoil it for me for weeks after, often starting a sentence with “And then Swami and Rajam…” [1]

Those were the good days. Never did I contradict Sanjay and tell him that I had had the upper hand that time. He was my elder brother, and I was loath to cause him any form of embarrassment. The problem was always that he never shared my idealism, my utopian vision of our relationship or of the world in general.

Indeed, it was because of a fall out with Sanjay on the management of our bookstore that I moved to Bangalore in the first place. I see now that there is no wrong way to sell books, but I was and still am enraged by Sanjay’s calculative attitude towards my passion. I stayed with the idea for a year and then backed out. That year, however, had more than assured me of what I wanted to do with my life. I borrowed some money from my uncle and, not wishing to compete with Sanjay’s brainchild Babble, took my family and set up shop in the then sleepiest, most beautiful city India has ever known.

I cannot say that I did not feel apprehensive at the thought of the risk I was taking in this new, south Indian city. My lifeline those days was the afternoon tea I had with Koshy, a fellow north Indian who ran a cafe and patisserie around the corner. We often chatted away comfortably in his large chairs about the quirks of common acquaintances. Koshy was just starting out then too. Soon his creation would become synonymous with the city itself.

I spent every rupee that my uncle had loaned me on books. Used books, new books, everything I could lay my hands on. I had, of course, overlooked the fact that I had far too little shelf to accommodate them all. I did the only thing I could and carefully buried each layer of books in another. It often took me days to create layers and commit them to memory. This slowly gave birth to the infamous 16*16 centrepiece cube that Pioneer eventually became famous for. The Cube, as it was admiringly nicknamed, soon expanded so much that there was hardly enough space to walk around it.

People would often come and stare at its seemingly exponential growth. They would tiptoe around it reverentially, and hating to interrupt me, attempt to navigate it themselves. Children, especially, were entertaining explorers. Their tiny hands would tentatively remove title after title under the watch of disapproving eyes and wait for the entire structure to collapse before them every time it swayed slightly. Defeated, they would come back to me and ruefully recite their wanted books and authors. Their looks of surprise as my hand disappeared into the mysterious heart of the “Eternity Cube” and pulled out their book never ceased to make me feel warm. One of my closest friends and associates, Sreenivasan Gupta, an acclaimed Indian author, once wrote a piece on my humble little bookshop. “The Cube,” he wrote, “will yield its secrets to none other than Mr. Patil.” Sreenivasan Gupta remains one of my closest friends and was Pioneer’s strongest defender when the time came.

His article increased my following immensely. Despite his claim, I was soon forced to hire two bright boys to help me keep up. But I cannot credit my increase in popularity to him alone. News of my whimsical discounts was already spreading faster by word of mouth. Never have I experienced greater pleasure than in telling underpaid graduate students that they could have their coveted book for free, and I regret to say that it is one that my brother has never experienced.

I was often forced to open Pioneer in the early hours of the morning and keep it open till late in the night. The one thing I love about Bangaloreans is that they love unpretentious literary discussions. I do not recall selling many books without having deeply insightful conversations first, trying frantically to catch a glimpse of my customer over those gigantic piles of papers.

But Bangalore’s literary merit was too good and too big a secret to keep to myself. Twenty years into setting up Pioneer I was told that Babble Bookstores would be expanding into Bangalore as well. I longed to burst in and claim what was mine, but I restrained myself. There was no need to burden myself with old rivalries.

Things chugged along at a relatively normal pace, but I was uneasy in my mind. Or perhaps that was just Bangalore’s new restlessness. I could see how the software entry had changed the city’s outlook.

My fears were not unfounded. I soon witnessed a change in attitude within my bookstore. People pushed each other, and then books, in their general haste. Conversation openers were no longer about good reads but about the lack of parking space. I saw children convincing their parents, my long time customers, to try the new, shiny bookshops with catchy names and attractive window displays. The shadows cast by those Metro Pillars over my beloved bookstore began to darken my life.

Perhaps my biggest rebellion against this dreadful modernisation was the boycott of credit cards. I refused to take them all the way up to 2004, and that was only because Pioneer was truly in danger of extinction. I remember the day Janani, my wife, and my daughter Sheila convinced me to do it. Janani was pleading, but Sheila had no patience for an old man’s silly fears and fancies. I had raised my daughter in the back rooms of Pioneer, amongst the new arrivals and tattered tomes, but I had somehow failed to give her my love for books. She grew up longing for harsh reality.

It wasn’t long after that that the notice of eviction came. Business had suffered terribly for about ten years because of my staunch belief that those pieces of plastic were a passing fad. I searched for another place, but in vain; most of my savings had already been spent in getting Sheila married and settling her abroad.

Sreenivasan Gupta stepped into the fray and wrote some beautiful pieces on what Pioneer meant to him. It provoked such a response that it was both shocking and heart warming. Readers through the generations rallied to my defence. Many wrote moving letters to me forbidding any form of closure. Many preposterous phrases like “legend” and “face of Bangalore” were thrown around. I finally had something to show for my single minded and stubborn adherence to my philosophy.

However, the overwhelming warmth could only buy me a year or so more in which to conclude this chapter of my life. I sold every last book I had. I slashed prices to such an extent that I became competition for road side book sellers. Whatever I could not sell I donated to numerous libraries. Even that Pioneer Bookstore sign that I had been so proud of was given away and recycled. My faithful supporters, determined unto the end, tried to raise money for me, but I stopped them. Janani’s health had been failing her, and I felt it was my duty to take care of her.

And so it was that I found myself, one and half years after yielding to the system, standing alone in an empty room that had cocooned my life’s work for the better part of three decades with nothing to show for it.

Change is a powerful thing, especially for an old man like me. It wasn’t long after that I found myself boarding a flight to Melbourne with Janani to meet Sheila and her family, armed with no more knowledge of the country than every piece of cricketing history it had ever witnessed and the little I had absorbed from Masterchef Australia. One might wonder what prompted a man whom it had taken ten years to accept the closing of his bookstore to leave his country without much consideration.

I left so that I might always see Bangalore in the splendour and innocence with which I first encountered her, a Bangalore whose weekend afternoons meant pacing up and down the narrow gaps between my stacks of books with a drink from Koshy’s in hand. I left not because I tired of my job or of my home, but because both seemed to be just about done with me. My Bangalore has been preserved in badly taken photographs that smell like mothballs when I take them out of the suitcase; my Bangalore breathes through the often thumbed through letters from old associates; my Bangalore, like Malgudi, now lives in memory and inspires imagination.

For Mr. T. S. Shanbhag, with whose kind permission this story was fictionalised and written, and Premier Bookshop

[1] From Swami and Friends by R. K. Narayan, a charming childhood book set in the fictitious South Indian village of Malgudi.