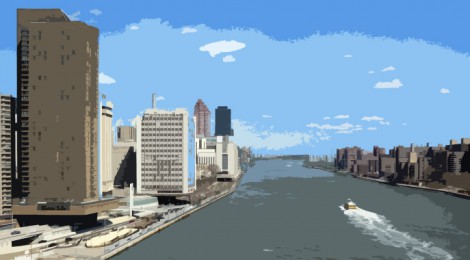 You and You and the White Sofa

While the view was magnificent, no one had enjoyed looking out the window of apartment 2G of 110 East End Avenue in several years. While the wind dug white caps across the surface of the East River that flickered exponentially, it had been nearly a week since someone so much as glanced through that square of landscape. While a picture frame hung crooked on the living room wall, no one paused to fix it. The dust on the kitchen counter went untouched and the carton of orange juice in the refrigerator reached its expiration date. The phone rang at four different occasions and the doorbell once, although that was probably a mistake.

At one time, at one stage of life, when someone was president and the clouds were positioned in such a pattern that will never be exactly replicated, you admired the river. You hung that painting; you stood in front of the couch and called for a second opinion, and both of you squinted your eyes until the fruit melted into disfigured circles.

When JFK was shot, you were standing in the Chinese restaurant around the corner, ordering sesame noodles and wonton soup. When jogging got hip, you trotted up and down the desolate blocks of East End Avenue at 6am in your khaki pants. You bought bagels at Murray’s and chicken soup from Zabar’s. You waited for several hundred cabs beneath the awning. You befriended the doormen. You took the stairs, and then the elevator when your knees grew weak. You pet everyone’s dachshunds and remembered half of everyone’s names.

You had a son, then a daughter. You gave her the larger room. You let them close their doors. They went to camp, on trips, to parties that ended well after you were asleep. You stopped asking questions and put a television on the dining room table. You let them grow to hate each other, and in many moments, hate you.

You bought silver chinaware and never ate with it. You bought scarves and never took the price tag off. You left them at home. You made 7 o’clock reservations and ordered Bloody Mary’s. You complained about the service and left large tips. You used your closets more than you used your rooms.

You bought art, expensive art: landscapes, still life’s, portraits of men who had no significance to you. You hung a mythical creature in the bathroom and a beach scene over the dining room table. And of course, there were the photos of you: both of you, one of you, holding your first dollar, being interviewed on television, having tea with the president, dancing at a wedding, walking through a foggy park, pausing to admire the view. It was everywhere, in every room: reminders of your life without them.

You had a living room. It had that river view; it had that great light. It had that white sofa, the long one, the one that reminded you of royalty. It’s where you kept your best coffee table books and your mosaic vases, the things people want to touch. Yet it was off-limits unless guests were over, which happened infrequently. You walked by that room countless times, as did your children, and your children’s children, and while you or they could always make out the white caps from the hallway, and while that sofa always looked so inviting, they knew the rules.

Off-limits for fifty five years. The most beautiful room you had, and a white sofa that was never stained.

Your parlor was the size of most people’s bedrooms. It served no purpose, except to hold your chinaware, because recently you had run out of closets.

You turned her bedroom into a guest room, his into a study. He moved, she stayed nearby, because someone has to, just in case. They went to therapy. They found people who loved them, in that moment at least, and had children of their own. You attended weddings, sat in the delivery waiting room, held an infant in your arms for the first time in thirty years. You felt like you had made a family.

You covered your refrigerator with holiday cards and pictures of your grandchildren. You hosted Thanksgivings and called on birthdays. You gave them donuts for breakfast and asked if they had boyfriends. In the back of the cab, you held hands over their laps when the seatbelt wouldn’t work.

You bought a computer and got an email address. You put a chair in the shower. You retired reluctantly. You watched Seinfeld for the first time and found it funny. You watched the news, more every day yet understanding less, until eventually it was only noise.

You began to lose track of time: hours, days, years, the incessant shift of day to night, became more irrelevant the fewer places you had to be.

You fell on the stairs and broke bones. Your posture worsened, your diction slurred. You celebrated your birthday in the hospital and refused to eat the cake until after dinner. The hairdresser came to you now. You forgot their names, or perhaps you had just stopped trying.

One night, around 3am, you got out of bed hastily. You got dressed in the dark, believing you were late for an appointment. You couldn’t miss your appointment, you told yourself, and you were so worried that you began to cry.

You lost each other. It was that simple: one day there were two of you on that couch, the next day there was one.

You turned the volume up on the television.

They are what remains of you. They’re depressed and unemployed. They’ve cheated on their spouses. They drink irresponsibly and they’re terrible with money. They hate each other so much that email is the only way they can bring themselves to communicate. One of them was almost late to your funeral. She ate her breakfast on the subway and did her lipstick just outside the doors of the funeral home, a bright shade of red, and she made jokes in the bathroom. And for that, she apologizes.

They let themselves in. They had been doing it for years; you always had trouble hearing the bell, and in that final year, couldn’t even stand up to answer it. They’ve brought boxes. They drop their coats on the floor and scrutinize the situation: the mess, the dust, the fucking fruit painting that bared too much sentimental weight to even look like fruit anymore, but rather a canvas of disfigured circles.

They take your books off the shelves and stack them in tall columns against the wall. They open your drawers and look through your files. They use your bathroom and try on your hats. They turn on the television because they can’t stand the silence. They enter the living room and sit on the white sofa triumphantly. They look at the water, at the rain.

They write their names on pink post-it’s and stick them to everything: jewelry, a table, a stone sculpture of a man’s head, photographs of you. Small pink squares on the covers of books, on the walls, on that one they argued over where you’re standing in the park, until your home has become an overgrown garden.

Imagine if you saw it like this. Imagine how disappointed you would be at the pink-tinted clutter, the neglect, the way your fruit bowl painting now hangs crooked.

Imagine how disappointed you’d be in them: showing up late, having affairs, holding your porcelain plates with greasy fingers. Some of them still don’t even have boyfriends.

There is so much silence that presses on their words, so much of the physical world that outweighs this secret one. So they leave your picture hanging crookedly, they leave dust on the kitchen counter, and those pink post-it’s spread through every room like the current before a storm, claiming these pieces of you, so that perhaps you will not forget them.