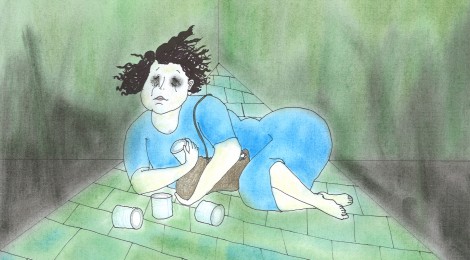 After She Was Gone

Papa was in his usual place in front of the telly, watching Call My Bluff, and muttering why Mummy wasn’t home yet. I was in my room, finishing my homework, trying my best to ignore the baby cot that had been dismantled and shoved under my bed. I wondered why they had wanted another baby? Weren’t they happy with just me? Look what baby Pinky did to us. She cried and cried, and took up everyone’s attention. And then one night she stopped breathing. Just like that. That’s when Mummy became someone else.

Papa took the call. He didn’t say a word, only nodded. Then he yelled up to me to put on my coat. I looked at him, and he seemed old and tired. His eyes were streaked with red lines, like he was crying, but his temple throbbed, like he was real angry. Like when he sliced his belt across my thighs – when he caught me with a ciggy at the end of the garden. I had only found one smouldering on the path, and had picked it up to watch it glow in my hand. But he of course wouldn’t understand.

I hurried along, afraid. Where was Mummy? What had she done? What would Papa do to her? Would he hit her as well? I eyed his middle, that damned belt was snug below his fat belly. But I didn’t dare ask him anything. He told me that the security-men had got Mummy.

What security-men? I wondered. Did they think she had killed the baby? Or was she trying to kill someone else’s baby? Like Kusum Aunty’s little girl? Revenge. I could believe that, since Mummy hadn’t stopped cursing Kusum Aunty, saying she had cast the evil eye on her Pinky. How Kusum Aunty was always commenting on how beautiful Pinky was. How lucky we were to have another baby. She only had the one. Dolly. Who was dark and had stringy hair. What rotten luck. Who would marry her? But Pinky was all milk and cream. Sometimes I would just sit and watch Pinky while she slept. She was a beautiful baby. White skin, black hair and the softest, pinkest lips. Sometimes I wished I’d have been born like her. But my face was covered with pimples and my thick glasses made my eyes look like a frog’s. Mummy would curse as she struggled to tame my hair into a braid. But I lived on, Pinky died.

We didn’t go to any police station. Papa strode into a department store. Already the shutters were half down. A security man looked unhappily at us. He couldn’t go home until the shop was locked for the night. He was young, with ginger hair sprouting from his chin. I felt sorry for him. Surely my heavy-weight mum could have wrestled him to the floor and run. He walked up to us, back straight, almost marching.

“Mrs Singh was caught shoplifting,” he said officiously. “This is her first offence?”

I could have spat on him. Papa was no longer straight and proud. He hung his head, like he was the criminal. He apologised and said yes. I saw Mummy in the corner. She was whimpering like a lost kitten. Her handbag was on the floor, unzipped and stuff vomiting out of the bag. She wouldn’t look at us, kept wiping her eyes and nose. Baby formula? Why was she stealing that?

“I thought we would need it,” she said to Papa. “My milk has dried.”

The security man said something about a first warning. And then we could take her home. We walked out into the chilly night, not saying a word. Mummy sniffled as she followed us. Papa strode ahead, not waiting for us to catch up. I stared at my trainers and realised that I had two different coloured socks on. I pulled my salwar lower and shuffled behind Papa. Two punks jeered and called us names. I hunched inside my coat and hurried along.

That night I strained against the wall to listen to my parents. But I heard nothing. As the moon sailed across my window, I slipped out towards the toilet. On the landing I paused. I heard Mummy’s gentle snores. I heard my Papa, crying softly.

It didn’t stop with the first warning. Mummy continued to pilfer from shops. Hairclips. Shampoo. Baby cream. Paracetamol. Gaviscon. More formula. Gripe water. She managed to avoid the security men most of the time. But sometimes, Papa had to answer a telephone call and step out to retrieve her. I wasn’t made to accompany him anymore.

The professionals became involved. They said she was depressed and this was her way of asking for help. Mummy went to a counsellor. She had to pack baby Pinky’s clothes and toys and give them away to charity. The baby cot was pulled out from under the bed and given a good dusting. That too had to go.

Mummy took to cleaning. She scrubbed and polished and brushed and dusted. She didn’t leave the house. She cooked and pickled and knitted and sewed. She stopped seeing friends and then the friends stopped dropping by. Papa slowed down and resigned himself to his armchair. I left them like that. I went to university. I studied chemistry. I became a pharmacist. I married. And then I had a baby.

It was like my parents were resurrected from the dead. They had a gleam in their eye when they held baby Amit. Mummy made sure he had thick kohl lines drawn under his eyes. Black tikka on his cheek. To avoid all evil eyes. Because he was so fair and milky and sticky and sweet. I’d hold him to my chest, obsessing over him, inhaling his scent, cherishing his need for me. He was mine, and I spent many a night, checking his breath on my cheek, his heartbeat on my palm.

Mummy would bring him little gifts she’d made. Jumpers. Mittens. Baby shirts and bed linen. She indulged him, and Papa’s laughter shook the house. At last they were happy. But that didn’t last long. Mummy died. It was quick and it was dreadful. Once again, Papa was stunned into silence.

He didn’t visit us for a long time. I’d go over sometimes. With Amit. Without. It made no difference. He just sat in his chair and stared out of the window. He didn’t eat very well. He shrivelled up.

One evening, I called as usual but he didn’t answer the phone. I panicked, imagining all possibilities as I strapped Amit into his car seat and rushed over to him. I found the house in darkness. The gloom inside was like a thick blanket, enveloping me in its constrictive embrace. I struggled to breathe as I switched on the lights one by one, racing around the house, calling out for Papa. I put Amit down by the stairs and shushed him as he started to protest. I heard shuffling upstairs so I ran up, afraid of what I would see.

He was sitting on their bed, bags and clothes strewn all over the floor. I turned the light on and he smiled, saying he hadn’t realised it had gone dark. I’m clearing your mother’s things, he told me. It’s time.

I nodded. I looked at her clothes and handbags and shoes. I’d been meaning to do it ages ago, but hadn’t found the strength to. I’d have to help him to stuff them into bags and take them to the charity shop now. I sighed and didn’t know where to begin. But Papa held up his hand. I’ll do it, he said. You have a baby to look after. I need to do this.

He pulled out a quilt from the bag. I remembered it well. A colourful patchwork quilt Mummy had made it out of scraps of my old dresses and her sarees. There were even bits of his corduroy trousers in there. I smiled as I felt it between my fingers. Different textures. All different stories, patched up to make this quilt. Papa held it out to me. For Amit, he said. Your mother would have wanted it that way. He smiled kindly at me and ushered me back to my baby.

I cooked him dinner while he crooned over his grandson. I put the leftovers in the fridge, repeating over and over again that he’d have to eat all of it in the next few days. He smiled again and touched my hand.

Amit started to howl. It was past his bedtime and I needed to rush back home. Papa helped bring out all my things. I managed to put Amit in his car seat while Papa loaded the boot. It was beginning to rain and I didn’t want to linger. I grabbed the buggy and dumped it on top of the quilt. We looked in horror as a mud stain spread across the cloth. I yanked the buggy off, and then heard the rip. The little patches of cloth, so old, tore easily where it had caught the wheel. We stood motionless and watched. Out fell little mittens and socks and bits of baby-gros. The quilt had been stuffed with baby clothes. Most with their tags still on. The ones that got away. The ones she stuffed quietly into this quilt. Bit by bit, padding the quilt. It must have taken her years, and yet she never got caught for these.

For a moment, there was complete silence. We stayed frozen, and then Amit’s cry ripped the air. Papa jolted out of his trance and picked up the fallen items from the ground. He hugged them close to his chest and stumbled towards the door.

I’ll take these, he said quietly. Take them down to the charity shop tomorrow.

I watched his retreating back. He was hunched over the bits he was carrying. The rain came down harder and I jumped into the car and drove off. I didn’t toot the horn like usual. This visit was best left unacknowledged.