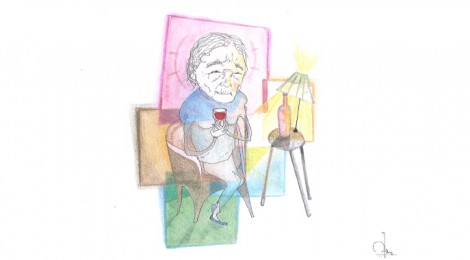 Mother, out of the nursing home for Thanksgiving,
skeletally osteo-arthritic at ninety-two, smacks
her thin lips at the first taste of white wine like
Priscilla, Queen of the Wine Harvest; Mother,
who could rival any buxom woman just a few
years ago, reclines concave now in our gray leather
living room, picks a tapenade –stuffed tomato with
her claw-like hands from a plate on her lap, nibbles
the crabmeat from a crouton and smiles encouragingly
as we refill her wine glass, the pale Riesling reflecting
on the ceiling and walls like transparent coins of
backyard honesty.

Once at the table, the ruby red sparkles and Mother
firmly grips her crystal stem like a baby with a new
rattle despite her twisted fingers, and proclaims her
usual toast in her strong, raspy voice before sipping
lustily. Later, we move back to the living room to play
charades, a game you’d think her deafness would
facilitate-signing “the” with her hands, demonstrating
syllables on her forearm, but instead, she lifts the heavy
wine bottle and pours herself more zinfandel.

Dessert served in the dining room again, the chandelier
blazing above the mahogany table, sauterne with the French
apple pie, muscat with the chocolate cake, Mother asks
for more like Oliver, but unlike his abrupt refusal, we kindly
say, “no,” not wanting her to fall when she returns to the
nursing home after her last glass of wine on this family day.