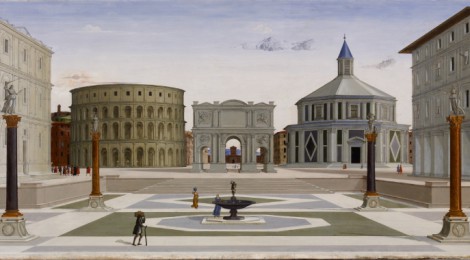 I stand before a painted City and vanish right where it hangs
on an old museum wall, unconscious
of the noise in Mount Vernon Square
below, its studied perspective and funneled point of view
having sucked me in
to roam a plaza almost entirely empty

of people, the gray sky overhead long-emptied
of clouds. Not far from me, a few small figures hang
about four symmetrical columns, hemmed in
by Palladian houses, unconscious
of how their City imposes a particular political view
with its strictly gridded square.

In the distance, Constantine’s Arch attempting to square
classical virtues almost emptied
of religious and civic meaning—perhaps a preview
of how much our present situation hangs
on rethinking the unconscious
of modern man, how much he fails to rest in

either Ghilberti’s octagon or the Coliseum in
Rome, his naked soul let loose in the public square.
Bereft of string, chalk or pin, and only semi-conscious
of the guards, I ride an imaginary ray, emptied
of any direction but true, and hang
my eyes on the City’s horizon. No two-sided view

is allowed by this unknown artist’s hand, no re-review
of reality’s motion or time exists in
this silent room where centuries pass without a re-hang
in perfect stasis. No one doubts this limned double square
once was true, a window into a world all but emptied
of the tremblers in our subconscious.

Neither sacred nor profane, I’d rather my unconscious
took a more cosmopolitan view—
not too hopeful or grim—while our polis emptied
of sense continues its bickering and toeing in.
If only I could draw a circle to mate with the square,
not think where the republic’s new victims will hang.

Meanwhile I stand before an Ideal City, conscious of yielding
to its empyrean view: a gridded square
almost empty of people where a residue of good still hangs.