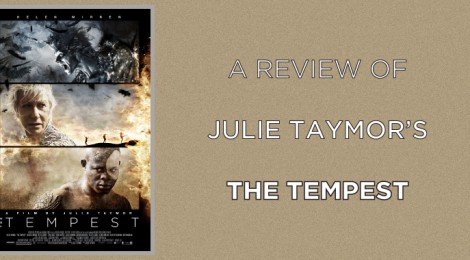 A Review of Julie Taymor’s The Tempest

In Shakespeare’s plays mothers mostly remain a shadow-presence with little or no agency of their own, while it is the father figures who dominate and steer the plays to their conclusions. The absence of the mother, may it be in The Merchant of Venice or in King Lear, is a glaring lacuna in his oeuvre that seems unnatural by present standards. But it was natural for Shakespeare to do so living under the influence of patriarchy.

However one can speculate that it was indeed part of Shakespeare’s own grand design to remind us of the invisible mothers by erasing them to complete non-existence. In this way he holds his claims to represent his time as well as be a part of the world of ideas we live in. But Julie Taymor in her film The Tempest, adapted from Shakespeare’s play of the same name, creates a place for the mother, in this case, by turning the male sorcerer Prospero to a female mother Prospera, endowed with the same magical powers that Prospero commanded. But the question is what does it do to the texts? To Shakespeare’s original and to Taymor’s own?

Since the story remains quite intact despite the change of the lead role’s sex, one cannot but wonder why then was it necessary for Taymor to do so. Through her film Taymor might be suggesting that Shakespeare was unable to let a woman take the central role that could easily have been hers, or she might be criticising the conventions of his age, like the burning of the “witches”[1]. Thereby a feminist leaning is more than visible in her cinematic text.

In an interview Taymor reveals, “I didn’t really have a male actor that excited me in mind, and yet there had been a couple of phenomenal females – Helen Mirren being one of them – who [made me think]: My God, does this play change? What happens if you make that role into a female role? We did a reading to see if it was just a gimmick, and it worked so beautifully. The potential was there to enhance the play for people who know it – and for others it will just seem natural.”[2]

This revelation makes it clear that she did not embark on making the film with the idea of a female protagonist in mind. It was rather the circumstances that made her reconsider the script and probably also incorporate some of the feminist angles.

In this regard it should be noted, that in Taymors adaptation it is only the biological sexual identity that changes while the gendering remains constant and represents patriarchy as we know it. Ariel and Caliban time and again refer to Prospera not as ‘Mistress’ but as ‘Master’. Prospera becomes the Machiavellian image of the ‘Master’ who rules by fear and not by love. But the empowered woman, who is clad up in masculine outfits at the beginning of the film, end up wearing a gown proper at the end. As she voluntarily gives up her powers, even the costumes show us how what could have been a radical feminist narrative conforms to the patriarchal norms as Prospera submits to her gender role. So at the moment of powerlessness, we see her become a woman, both sexually and gender-wise, and there is no ambiguity about it to read otherwise.

Interestingly enough Caliban and Ariel enjoy this ambiguity with regard to their race and gender respectively. The circle of white skin and a blue eye on the muddy dark skin of Caliban’s hint that deep within him is the same white masculine man who rules him presently. And in the scene where Trinculo and Stephano chance upon him as a storm brews above, one cannot but wonder if a downpour would wash away the muddy cover, revealing a European self, with white skin and a glowing blue eye, which the characters have been trying to ‘otherize’. Owing to an obscure sexuality and gender role, a similar indeterminacy exists in Ariel, Prospera’s other slave. In the postcolonial framework, if Prospera is the colonial master then Ariel is the impotent colonised, while Caliban becomes the colonised who is bubbling with excessive sexuality. [3]

Tempest is also considered to be a play that celebrates theatre. Tymor’s theatrical background makes it seemingly easy for her to incorporate this aspect of the text. The costumes, the way dialogues are delivered as well as the setting of Prospera’s ‘court’, which reminds us of open-air Elizabethan theatres with numerous entrances, and trap-doors that signified hell and heaven. In this regard, Prospera’s roofless court with Ariel’s entering from below, the King and his group descending from above, and Miranda and Ferdinand playing chess in what appears to be an Elizabethan “tiring house” recreates the aura of the Elizabethan theatre.

Taymor consciously offers in her film ideas that have been firmly established by scholars. I have tried to make this clear by showing: that the radicalism she proposed by introducing ‘Prospera’ did not raise a strong feminist voice as it could have; how she, although rather artfully than many, re-establishes the already known postcolonial reading; and how she knits neatly into the film the aspect of Tempest that celebrates theatre.

But what is new in all this is the very fact that when she introduces a masculine mother, she not only points to the lack of it in Shakespeare but more importantly aligns her text with a larger discourse of such mother-daughter relationships vis-à-vis Shakespeare. And this would not be the first time a Shakespearean text would be used or seen as an example of serious social discourses. In this regard, we can think of how during the 60s and 70s, The Tempest began to be seen as a text loaded with postcolonial discourses, some of which, as I have mentioned, surfaces in the film. A case in point is also The Merchant of Venice, which was the most performed play in Nazi Germany because it was produced with an anti-Semitic propaganda[4]. But given our experience of the holocaust perpetrated by the Nazis, a production of the same play today cannot remain anti-Semitic, this historical juncture requires us to read the play with a new filter. Thus it is important that we inspect closely Prospera’s motherly qualities or the lack of it.

Taymor’s Prospera is not an ideal mother but a woman fighting for what is rightfully hers. Prospera’s honesty lies in not securing a future for her daughter but in securing Milan, which was once her dukedom. Although Prospera claims that Miranda is “a third of mine own life”, her main motivation nonetheless remains reclaiming her throne. Therefore Miranda’s “virgin knot” remains an utmost concern for Propera because she cannot risk this opportunity to return to Milan in case Ferdinand violates Miranda and leaves without marrying her. When she reveals her true self to King Alonso and his companions, she makes her intentions of being reinstated very clear. Once she has settled all accounts and successfully devised her return she says to herself “and thence retire me to my Millan where every third thought shall be my grave.” Thus the promise of a radical feminism that Tymor evoked by introducing “Prospera” ends on a rather bleak note.

Seen from this perspective Prospera appears to resemble remarkably to the vindictive stepmother in Snow White, the evil queen, who was obsessed with being “the fairest in the land” and ready to sacrifice Snow White and uses witchcraft to attain youth. The analogy becomes even sharper thanks to Jack Zipes’ latest translation of the Grimms’ Fairy Tales[5], which shows how in the original edition of Snow White the evil queen is her biological mother. In the film, the scene where Prospera looks into the mirror-like-water for Ariel to appear, we are not only reminded of her narcissistic impulses but of the ‘Mirror on the wall’. If we take the ‘mirror man’, the evil queen Ravenna’s magic mirror, from Snow White’s latest adaptation Snow White and the Huntsman, it bears remarkable visual similarity to Ariel-the slave spirit. That is to say, at a fundamental level, Propera and Ravenna in their behavior, ambition and ways of functioning, are closer to the idea of the evil queen than ever before. In their “un-sexing” Prospera and Ravenna are both removed from their natural selves, as was Lady Macbeth. Propspera as seen through the changing costumes was hiding her feminity, while Ravenna was hiding her age. Both mothers use their daughters as trump cards to fulfill their dreams.

But probably such straitjacketing is misleading. Their aggressiveness might not reflect their evilness but their helplessness in a patriarchal system. Interestingly enough, in two recent films on the Elizabethan period Elizabeth herself delivers dialogues like, “I may be a woman, Sir William, but if I choose I have the heart of a man! I am my father’s daughter. I am not afraid of anything.”[6] and “I know something of a woman in a man’s profession.”[7]

Thus Ravenna’s sentiment, “Men use women. They ruin us . . . I will give the wretched world the queen it deserves”[8], seems appropriate to a mother like Prospera, who has been wronged by the world even before the cinematic text begins. But at the end of the day she becomes a greater human being by forgiving all who have wronged her at various levels. Her inner wound made her self-absorbed but she has been dutiful to her daughter nonetheless. Julie Taymor’s success thus lies in the last bit of the film where Prospera having achieved what she desired to, finally divorces herself from what Prospero was, and becomes a mother she should have been.

[3] Calibanhad tried to “violate the honour” of Miranda, the film informs us at 20:06 minutes.