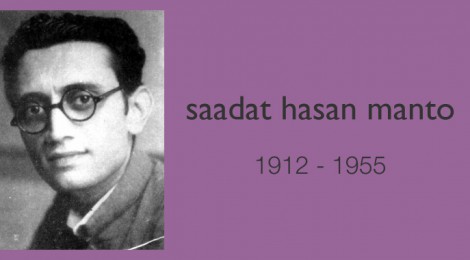 Like every year, the world celebrated Saadat Hasan Manto’s birthday on the 11 th of May. Amidst celebrations world over with readings from his stories, it seems that the world has re-awakened to the presence of one of the most powerful writers in the sub continent. Needless to say, Manto remains one of the most remarkable writers who left a powerful body of work that saw him make use of wit and more importantly his sarcasm to criticize both India and Pakistan, wherever and whenever needed. Having said that, one cannot but wonder whether the resurgence of interest in Manto’s writings in recent times is a result of the times we have been living in, forcing us to step back and take a look at what this intuitive writer had already told us long back. On the 6th of January, this year PTI reported the Border Security Force (BSF) quoting that there was ‘no communication’ between the two sides. The statement came as a reference to Pakistan opening fire at five Border Security Force posts in Jammu’s Hiranagar sector. The statement, though used in reference to the firing has more implications than perhaps meant by the security personnel. News reports from various agencies reported that at least ten Indian and Pakistani soldiers and civilians had been killed in fighting earlier this month and thousands of residents of border villages in Samba and Kathua districts were lodged in makeshift camps away from their homes following indiscriminate shelling of civilian habitations.

It has been sixty plus years since our independence, since India and Pakistan have been separated and yet the bitterness continues. In both countries and perhaps in the rest of the world, religion defines us more today than anything else. In their own ways, the nations have developed, even prospered and yet in terms of peace between its people not much seems to have been achieved. There were refugees before; there are refugees now, people being killed in the name of religion then, as they are now. More than ever one is reminded of Manto today, his wit, his ability to say it like it is and amidst it all never cowing down to the powers that be in his ability to express his thoughts as a writer. I’m reminded of one of Manto’s essays, A Stroll Through the New Pakistan, where Manto while strolling through the roads of Lahore, makes his observations on the newly formed state of Pakistan. Most of these observations are sarcastic and seek to highlight religious intolerance as well as sycophancy towards its new leaders. Manto narrates an anecdote that occurred on a familiar chowk in Lahore, where he highlights with subtlety the bitterness between the two countries post partition-

‘I came to a familiar Chowk, but the statue I had known was missing. I asked a man where it had gone.

“Those who owned it.”

I thought to myself, even statues were now refugees. There might come a day when corpses would also be dug up and moved across the border. I was about to leave when a man, out for a stroll like me, said:’ It hasn’t gone anywhere. It’s still here. And safe.’

I prayed-‘God, please don’t let me be around when they put people in the museum too because they are different.’

It is not difficult to understand Manto’s jab at the word different here, in fact it is a pertinent reminder of religious intolerance on both sides perhaps, and seeks to ask the question whether the liberty to propagate one’s religion actually leads to more chaos, fundamentalism, extremism, etc? More than any other writer during his time perhaps, Manto’s writings raised these issues again and again, through his stories that reveal the horrific behind religious intolerance, even while he appears as the casual observer, through it all. A deeper reflection of his stories and essays however reveals that Manto is anything but the casual observer, in fact he is deeply grief struck by the horror behind such extreme fundamentalism. In an essay titled, Bombay in the riots, he observes the communal violence in Bombay during the Quit India Movement. He writes-‘I couldn’t leave home for three days. And so I began reading the newspapers and heard terrifying stories from people. The Muslim League is a mosque, the Congress is a temple. This is what I gathered from the papers. The Congress seeks independence and so does the Muslim League, but their paths aren’t the same. For some reason they can’t work together. .I thought that the Hindus and the Muslims would busy themselves in this war and their blood, which did not mix in mosque and temple, would finally mix in Bombay’s drains and gutters.’

In his essay, By the Grace of Allah, Manto envisages a society where all forms of creativity including music, art, literature and even the poetry would be banned and censored just as it had been done in the times of Pakistan’s national poet Allama Iqbal. One cannot but ask how much has changed since those times? In his essays like Iqbal day, Manto speaks of the censorship that was endured by writers like himself and Iqbal. Iqbal’s poem called Shikwa, which was a complaint against God, was condemned, as had been many of Manto’s writings even though he was recognized as one of the greatest writers from Pakistan. It reminds one of the present day scenario, where censorship has wrought havoc with as many pieces of literature. We live in an age where books, that chose to express views that may not find agreement with mainstream religion are banned, writers/cartoonists are killed because they have lost their rights to laugh at religion.

More and more of Manto’s writings have been revived in translation in recent times, perhaps because world over people have freshly found the relevance of his writings in times such as these and as such it makes more sense than ever to read him now all over again. Interestingly Manto is perhaps the only writer who can claim to belong as much to Pakistan as he does to India, in similar yet different ways. His darkest and most popular stories belong to the post partition days when he had to flee to Lahore, mostly fearing for his family’s security. But in his heart of hearts Manto loved India and some of his most delightful writing belongs to the phase when he was in Mumbai( Bombay). Reiterating this very thought process ‘Mint’ columnist Aakar Patel, who has translated Manto’s essays from Urdu to English spoke in Bangalore’s Lekhana literary festival, based on the theme of Narratives Of Violence earlier this year. Mr. Patel reiterated Manto’s love for Bombay and his vivid descriptions of the city, while also reminding the audience of the truth behind his predictions for Pakistan.

Contrary to his constant declarations of how politics bored him, Manto’s writings on politics are astute and cover a wide range of predictions that he foresaw, not only for a world society, but Pakistan and India in particular. As such, his writings point towards patterns that India and Pakistan forge with religion, as also their relationship with the United States. This is evident in his satirical writing in the, ‘Letter to Uncle Sam’ which were written in the early 1950s, giving his readers an overview of the politics, culture and international relations of the period with its historical backdrop of partition and how it affected both Pakistan and India.

To say that Manto was ahead of his times is an understatement, what he had written then holds good even more today. What is important to reflect upon is perhaps, what the people on both sides of the border have imbibed from his writings and it is only in this realization that Manto would remain in our hearts and assume importance in times such as ours.

Author’s Note: All works of Manto cited are from ‘Why I write- Essays By Sadat Hasan Manto’ By Aakar Patel