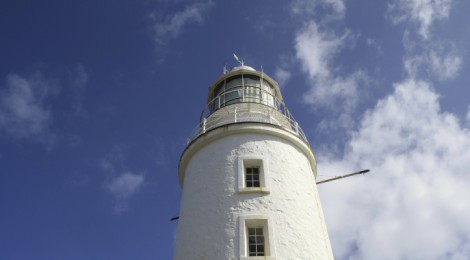 My father had a job as a lighthouse keeper. His lighthouse could be seen from all over town – on account of our town being built on a hill that descended into the lake – but no one was allowed on its grounds but my father. Some said it was haunted. The lighthouse stood close to a hundred feet tall, and according to my father, from the top you could see the whole town, the way the birds do.

“Nothing goes on in this town without my seeing,” said my father. After dinner, on the night before my thirteenth birthday, we walked down to the lake to skip stones along the surface. Since our town was built on the east-side of the hill, we couldn’t see the sunset, and across the lake the lighthouse had already begun its nightly searching.

“How can you see anything?” I asked him. Not only was my father near-sighted, but the lighthouse must have been a half a mile from the shore.

My father paused. He skipped a stone that plopped heavily into the lake. Kerplunk! From the sand, he opened another beer. He drank this one down the way he always did, in long, exaggerated gulps. He took his time, and at the end of each drink, he kissed the bottle with a loud pop of his lips. It sounded so refreshing.

“You know,” he said finally, still looking at the water, “you can see it for yourself if you want to.”

Digging in the sand, I uncovered a treasure: a smooth, thin stone, perfect for skipping. I cleaned it off. I skipped it with a sharp flick of my wrist, the only way to make it skip. It made five good jumps along the surface of the water.

“Not bad,” said my father. At the end of the last skip, after it sank into the lake, a splash came up that formed a series of rings along the surface.

I laughed. “Fish aren’t too smart,” I told him.

My father shook his head, as if to say he’d known plenty of smart fish in his day. Then he continued. “I’m serious, Tom. Would you like to go out to the lighthouse tonight?”

I glanced in my father’s direction, but in the setting sun I couldn’t make out the details of his face.

“Not until tomorrow morning.”

He pulled up his feet and left the empty bottles on the shore.

“Come on,” he said, and where my father went I followed.

The stars came out as we headed toward the boat, which my father always kept in the shed down-shore. Because of the rain that year, I hadn’t been out on the boat all summer.

“The water is freezing!” I called to my father. With my pants rolled up to my knees, I stamped and tried to adjust to the temperature.

Further up shore, my father swatted his arm. The mosquitoes had risen and were keeping close by. For some reason they seemed to like him better. “Now you have to keep this a secret,” he told me.

This I considered. “A secret from who?” I asked.

“From everyone,” he said.

I turned this over as we approached the shed, an old ramshackle building.

“This is just between you and me.”

My father let ring another slap as we untied the boat. He jumped into the mud at the bottom of the shack, and here I went behind him.

The boat was very heavy, but eventually we knocked it loose from the mud and seaweed. With the slop between our toes and our lower bodies soaked, we jumped on board. We shook ourselves dry, and from a hidden compartment on deck my father uncovered another beer. He cracked it open and the echo rode down the lake. Here on the lake the mosquitoes were fewer. I watched my father. I knew he wouldn’t share. I wanted to ask him, “Is the lighthouse really haunted?” But when the motor started grumbling I couldn’t hear a thing. The sky became a dark reddish-blue.

“Here,” said my father, and he handed me a life jacket. “The water gets rocky further out.”

I set it aside, but my father insisted.

“Do it for your mother’s sake,” he said. He pointed toward the shore and watched me get buckled. Our town became smaller and darker further out.

The motor cut off about ten or so yards from the island. The beach where we started out was now indistinguishable in the dark. I could see the lighthouse as we got closer, ancient and built from stones and reaching up high into the sky, its rotating light like a great north star.

No wonder no one can come here, I thought, looking out at the black crashing waves, at the border of tall rocks that circled the island. The world around us thundered, and I pondered what my father would do next.

“We can drift the rest of the way,” he said, belching against his arm and reaching for the rope.

I nodded my head and shivered. My feet were tucked between my legs, and my wet clothes were sticking to my skin. The waves knocked the small boat up and down. The entire lake had awakened around the lighthouse. I looked back at the shape of the town, the small, scattered houses, their tiny lit windows, and wondered if anyone could see us.

When I climbed out onto the island, my father tied the boat down against a post. The wind came howling and blew back my hair and I could barely hear anything over the loud wind and water. I wanted to tell my father that it was going to storm, that we probably shouldn’t have come out tonight, but I knew I’d only be silenced by the island. My father held onto my back and guided me inside.

Inside the lighthouse everything was black. The storm outside, or what sounded like a storm, got muffled by the lighthouse’s heavy metal door. My father pulled a switch, and piece by piece the tower was revealed. The interior of the lighthouse, with its long narrow stairs and gray stone design, resembled a castle, or how I thought a castle might look. The whole place stunk like fish and mold, and when I looked up at a window I could see a long silverfish scurrying up the wall.

“Do you see this?” said my father. He was pointing toward a small white panel beside the door.

I nodded that I did.

“This is the brain of the lighthouse,” he said, his eyes creased in respect. “This box right here is programmed to tell time. Dusk and dawn. The light at the top of the lighthouse is on a timer that gets changed every season. This is what turns it on and off.”

It looked very simple, but my father opened the box and softly fingered the buttons. To my right I saw the window, slatted with iron bars. A sludge hung down from the sill. A thick, caked material.

“Guano,” said my father. “The birds like to rest there in the windows when they’re open.”

Inside the lighthouse I shivered. On the boat I’d put on a pair of my father’s flip-flops, but otherwise all I had on were my jeans and a loose-fitting polo.

“Remind me to wipe this one down. Come on,” said my father. He began to climb the stairs.

Because of the stink I tried to hold my breath, but soon I felt exhausted. My father climbed to the top without so much as slowing, and I noticed for the first time that my father was in pretty good shape. At the top of the staircase we came to another heavy door. Outside the lake wind moaned.

“Are we going back outside?” I asked.

“Do you want to stay in here?”

Because of the wind the door slammed back against the circular stone wall. We stepped out onto the thin porch at the top of the lighthouse.

The breeze above the lake was something living. It forced us back against the building, but my father walked over and leaned against the railing. He signaled me closer.

“Look at the lake,” he nearly shouted.

The lake was dark black, galactic. Speckled with constellations, it blurred in the current, interrupted in patterns by the light at the top of the lighthouse.

“It looks like it goes on forever,” I told him.

“It looks that way some nights,” he said. Then he said, “be careful.” He pointed out another patch of guano.

The moon shined down on the dark rippled water, and at the top of the tower the wind felt electric. I squinted my eyes in the power of it, but my father kept on staring, unfazed.

“Do you see that blinking light out there, all the way out to the west?” he asked. “There’s another lighthouse out that way.”

I traced the point of my father’s finger to the dim blinking light. In the darkness the far-off light looked lonesome. In distress. I leaned out over the ledge to see it better, but my father pulled me back in.

“A man’ll drown getting that close to the edge.”

I looked at my father in the shadows. His face seemed a mile away, lit in segments by the glowing lights inside. He stared out over our town, looking stern and serious, and I shared his gaze. Again, I wondered what he was thinking about, what he’d meant when he’d told me that nothing went on in our town without him seeing. It was hard to make out anything from this far off.

“Now you’re one of only two folks in town who have seen it all,” he yelled at me over the wind.

I braced myself in the strong, bitter cold. It would take a long time to get back home. I thought of my mother in the kitchen, worried and wondering what had happened to us. With my arms tucked into my shirt, I measured the dark water between the town and my father in his sanctuary. I tried to find my house across the lake.