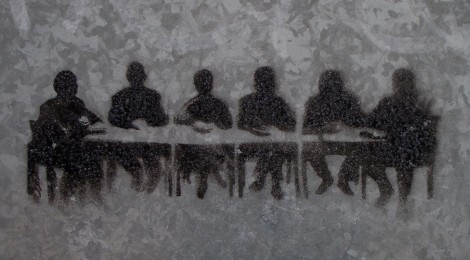 “Well, we gotta do something!” Spencer shouted, folding his arms across his chest. He was frustrated, but even more he wished he hadn’t raised his voice. It was unprofessional, not leader-like. He wondered what a good management coach would do.

“What about her vacation?” Ginny implored. “I said it was OK.” Margaret shot her a glance cold as ice. She was tired of her whining.

“Just say something about the budget, Jim,” Margaret explained. “Tell her it’s not a discharge. Miraculous is simply eliminating the Marketing Manager position.”

“That’s a lie,” Tims blurted. He looked over at Ginny for support, but Margaret had cowed her into silence.

“I think it is about her,” Tims countered. “She’s the one losing …”

“Well, maybe you should tell her, Tims,” Spencer replied bitterly. They looked over at Kimball’s door. It was still closed. He was in there, they knew. “I’ll send her an Email.”

“No. You’ve got to talk to her,” Ginny Morris said, stiffening. “That’s the only way.”

“No no no.” Margaret exclaimed. “If you can’t speak to her in person, face to face, then don’t do it.” Spencer drummed his fingers on the polished walnut table. He straightened the large knot in his tie.

“Alright. Whatever. So I’ll meet with her tomorrow.  Who’s going to help me?”

There was no answer. Then, Kimball’s door opened. Not quickly, not slowly, but measured, grim almost, like the ponderous jaws of some enormous crustacean that lives in the depths of the sea. He stuck his head out.

The CEO didn’t acknowledge any of them. He just stared into the room. Only the faintest smile crawled across his face. Then he withdrew. The door closed.

The next day was Friday. This was fortuitous for Spencer since he had heard Fridays were always the best days to get rid of somebody. If there was any drama, the weekend gave everyone a chance to cool off. But he had slept little the night before. He didn’t know when, or how, or why exactly he was going to do it. Or even what to say. ‘Position eliminated’ seemed right yesterday, but now it felt dry and officious. He tried to say the words, but they stuck. He considered alternatives: ‘Something about the budget. A new direction. Good to great. Downsizing. Rightsizing. Nothing made sense. He drank six cups of coffee that morning.

Margaret Thomas buried herself in work. It was month-end, and she had to complete the financials. She slammed her door and locked it. Kimball himself knocked but she wouldn’t answer. She turned off her phone, logged off the email, trying to disappear.

Tims talked the whole thing over with Ginny Morris. He liked her. She was pretty. And she liked him too, coming out from behind her desk when he came into her office, taking a seat beside him. She thought Tims’ work calling on clients was glamorous, especially when he got to visit New York. “It stinks,” he told her, this Maryanne thing. “It just stinks.” Ginny Morris shrugged. She thought his hair looked nice so she made big eyes at him, and shrugged. “Why can’t Kimball do it? It’s bullshit,” he said. She smiled, crossing her pretty legs. Tims noticed.

By lunchtime the Executive Team was exhausted. Spencer was sick to his stomach from too much coffee. Margaret Thomas had become lightheaded staring at her figures. Tims was so disgusted he went to the driving range down the street and hit golf balls. Ginny Morris felt good. She had found another bargain at Nordstrom.com, but she became slightly nauseous when she sent Maryanne Nelson an email invite to a meeting at three in the conference room. She left the Subject: line empty even though she knew what it was about. Ginny’s heart fluttered when the invite was quickly accepted. She looked at the donuts she’d brought back from Kimball’s meeting that morning, feeling queasy.

At a quarter to three, Spencer herded the little team into the conference room. Panic gripped them. They were all wound tight as a golf ball. They blamed Kimball. They mistrusted each other. They were down on themselves. They could barely speak. It had become clear to Spencer that now … with the crisis upon him … he couldn’t go through with it. He stared bitterly at his hands that were folded on the conference table as if in prayer. Margaret Thomas also knew Spencer couldn’t do it. Tims thought Spencer might really do it, but hated him for it. Ginny Morris was just glad she didn’t have to do it. They stared at each other in a sweaty silence.

Then Kimball: they stared at his door. He’s in there, surely. Maybe he’ll reconsider, they thought. Maybe we can wait till next year, they hoped. Maybe there’s another job here Maryanne could do, they pondered. Spencer rose. It took an hour for him to cross the room, it seemed. At Kimball’s door he raised his hand to knock … and … and there it froze, in mid-air, suspended, paralyzed, like a statue. A forever passed. And then another one. Finally, at long last, Spencer’s hand fell … but not on Kimball’s door. It fell to his side like something flabby and decayed. Next, Tims rose. He was mad, but he couldn’t quite get his feet under him. Ginny Morris was tugging on his sleeve, her face filled with a twisted mixture of affection and anxiety. The man fell back into his chair, the woman gripping his arm. Finally Margaret Thomas stood; they all looked at her. She had known Kimball the longest. The CFO approached the door. She prepared to knock, but thought better of it, calling out his name … “Mr. Kimball. Mr. Kimball. Henry. Hank!”

The door remained. It was five minutes ‘til three.

“We can’t do it,” someone whispered. Suddenly, a sound … a something… emanated from behind Kimball’s door. It may have been laughter. No one could be sure. No one spoke.

Then the silence again. “She’ll be here in a few minutes!” someone gasped.

“Alright,” Spencer spoke up, with the confidence of a man who had reached the very end of his rope, who had nothing more to lose. He could as easily have said ‘Uncle’. He tore a sheet of paper from his legal pad: “If we can’t say it to her, goddamn it, maybe we can just write it down.”

“Just do it!” Margaret barked. She tore a sheet from her pad. Ginny Morris did likewise, and gave a sheet to Tims as well, who never took notes during a meeting.

“She’s coming!” Ginny cried. They all wrote something down, and tossed their messages onto the table. Then, as one, the Executive Team departed.

The conference room was empty now. It was quiet and very still save for the afternoon sunlight streaming in through the big windows, illuminating the dust motes suspended in the air. If the sheets of paper on the table had been living things, one might have said they were lonely. It was this scene that waited on Maryanne Nelson when she arrived at exactly three.

The Marketing Manager checked her watch. ‘Give them a few minutes, she thought, and of course Mr. Kimball was always late. She approached the sheets of paper on the table. They were turned face down, but she could make out writing on the other side. She looked at Kimball’s door. All quiet. She looked back into the hallway. No sign of the others. She reached for one of the sheets of paper, turned it over, and slowly read it.

“Dear Mr. Kimball, it is with sincere regret that I must resign my position at Miraculous Technology, effective immediately. I have been under much stress and I cannot fulfill my responsibilities. Also, I am thinking of starting my own coaching company. Respectfully, James Spencer, VP-Operations.”

Maryanne Nelson gasped. She had known Spencer for a long time, and respected him. Operations always mystified her. She returned the message to the table. Again, Kimball’s door remain closed. She heard nothing in the hallway. She reached for the next sheet of paper.

“Dear Mr. Kimball, it is with sincere regret that I must resign my position at Miraculous Technology, effective immediately. I have been unable to concentrate on my work due to internal conflicts that I cannot resolve. I am also hoping to spend more time with my family. Respectfully, Robert Tims, VP-Sales.”

Maryanne Nelson’s knees grew weak. She was grateful to Tims when he gave her the website project. She looked around … all quiet still. She reached forward again.

“Dear Mr. Kimball, it is with sincere regret that I must resign my position at Miraculous Technology, effective immediately. I am sorry that I signed the Vacation Approval Form for Ms. Nelson. It was a mistake that has upset me to no end, to the point where I can’t work anymore. Besides, I am thinking of going into retail. Respectfully, Virginia Morris, VP-Human Resources.”

Maryanne felt an empty place in her stomach. She was sorry the vacation request had upset Ginny Morris. She liked her. There was always chocolate or treats in her office. There was one last paper. Maryanne looked around again. No sound from Kimball’s office, no sound from the hallway. Only the silence. She read the last paper.

“Dear Mr. Kimball, it is with sincere regret that I must resign my position at Miraculous Technology, effective immediately. I have spent too many years submerged in numbers, and I need a break. A long break. I have few friends here, outside yourself of course, and in fact few friends anywhere. I am thinking of buying a condo in Miami Beach. Respectfully, Margaret Thomas, Chief Financial Officer.”

Maryanne Nelson sat down, or fell, into a chair. She felt faint. Everyone was going. ‘Already gone, in fact, it seemed. She wondered what was happening. What was going on? There was almost no one left. She sobbed up a few tears.

Henry Kimball, CEO, opened the door of his office and stepped briskly into the conference room. Maryann Nelson rose to greet him, but he waved her off. She remained still.

“I guess maybe you’ve heard by now,” Kimball said, taking a seat at the head of the table. Maryanne thought of her colleagues and tried to speak, but she felt overwhelmed.

“It’s all over. We’re selling the company.”

Maryanne’s eyes, already moist, now grew large as dinner plates. “Yes. Fabulous Computers finally made us … made us an offer we couldn’t refuse.” Kimball gave a little laugh at his choice of words. “Shareholder value, you know! It’s a total buyout. We’ll be merging with them right away. Actually, it could be a pretty good deal for the workers. The new company will be a bigger operation, more opportunity, more products and services.”

Maryanne looked at the resignation letters on the desk.

“But for management?” Kimball shook his head sadly. “No, there’s quite a bit of duplication. I’m afraid the Fabulous team will run the new company.”  He looked at the sheets of paper on the table. He looked at Maryanne Nelson for a long time. “And that means us too, I’m afraid.”

Maryanne Morris sank deeply into her chair. She stared at the floor and sighed. She noticed the dust motes dancing in the sunlight in the warm conference room. Everyone was going.

“Including me.” Kimball groaned. They just sat together in the silence for a few minutes. It seemed like a forever. But eventually it grew comfortable.

“Is there anything I can do, Mr. Kimball?” she asked.

Kimball shook his head. He picked up the documents the Executive Team had left on the table for him to see. He tidied up the little sheets of paper and slid them into a folder. But he didn’t read them. ‘Like he didn’t need to.

She knew it was the end.

“Why don’t you take a little vacation? On the house …” Kimball said, smiling.