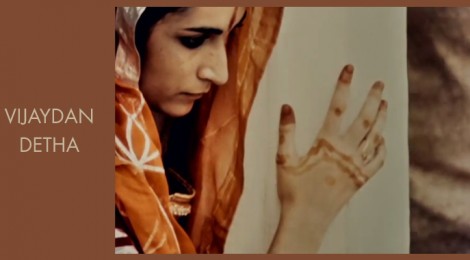 “The stories of the desert are like its sand, fine and transparent.”

The Nobel Prize in Literature for the year 2012 was won by Mo Yan, the Chinese Novelist who with “hallucinatory realism merges folk tales, history and the contemporary”1. One can’t help but speculate if Rajasthan’s most renowned author (conferred with the first ‘Rajasthan Ratna’ award recently) and a master of retelling oral folk tales, Vijaydan Detha, is in the Nobel Committee’s top considerations.

Like Mo Yan, Vijaydan Detha’s literature is rooted in the rural, its roots penetrating far and deep into the history of the land where he was born and raised, and where he decided to spend his entire life. His stories, like Mo Yan’s, derive from a rich cultural heritage and a record of history preserved orally. “My village was my university and my literary education, if there was any, came from rural women who always had so many interesting stories, anecdotes and wisdom’s to share. Unlike conversations of men, who were corrupted by their travels outside the village and their interactions with different people, feminine gossip was such a landmine of interesting ideas,” he said in an interview to The Hindu.

Though Detha’s work dwells in the traditional folklore of Rajasthan, in poetry and narratives preserved through oral traditions over centuries, it consciously departs from the Medieval tradition of Dingal virkavya (heroic tales). Medieval Rajasthani literature is mostly paeans and epic poetry written in praise of the great kings and warriors of the desert land, especially the Rajputs. Rabindranath Tagore once said of this literature, “The heroic sentiment which is the essence of every song and couplet of a Rajasthani is peculiar emotion of its own of which, however, the whole country may be proud.” Detha distances himself from this sentiment openly, quite vocally, and if anything, he seeks to turn the genre around by grounding his characters in realities, by investing in their ‘inner conflicts’, and also by demystifying the bygone times through accentuation of the societal issues the tales were always mired with. Upon reading any of Detha’s many collections, the refusal to revere the royal, the rich, the powerful is starkly visible.

This infusion of  grandeur in the traditional tales along with the social-real shouldn’t come across as surprising since Detha had read all of Premchand, Mahadevi Verma, Umitranandan Pant, Jaishankar Prasad and Harivanshrai Bachchan by age 15 and was more than inspired by their works. In his college days he started reading Sharat Chand and Anton Chekov, both becoming his lifelong literary heroes. It was their influence and of other pioneers of  nineteenth century Russian Literature, who in their focus on the pastoral and proverbial, drove Detha back to his village, Borunda, at the age of 33. By then, Detha had already composed more than 300 short stories and 1300 poems besides literary criticism in Hindi2. He was receiving increasing recognition from both a widening young readership and the aging maestros of the Indian literary arena, yet he did not consider himself having surmounted any peaks. On the contrary, he judged his work as mediocre. “I thought if I didn’t return to my village and write in Rajasthani, I would remain a mediocre writer,” he said, recounting the rationale behind his pivotal decision. That he decided to write in a language that had historically not found many champions at the national level, that he abandoned the language and  style in which he had already attained a certain level of proficiency, and which would have provided him much more immediate readership, is the evidence of bravery in this artist, who put his writing ambitions and integrity over the comforts of fame and wealth that writing in Hindi could have brought him.  If Detha really was mediocre in Hindi – as he assessed himself to be, his writing ventures in Rajasthani were anything but. His most loved work, Bata ri Phulwari, a series of collection of short stories, went in print in 1960 and continued till 1975 with 14 volumes in total. Here now was an author who had arrived. An author who had found his calling and style. And, looking back, most noticeable in his arrival was  the short story  published in 1962, Rijak ki Maryada.

Rijak Ki Maryada, translated to English by Christi Merill who also takes the liberty to title the story as ‘A True Calling’ (and very aptly so), is based on a tiny witty tale that seeks to impart not lessons in morality but japes and humour.  Detha impregnates the story’s central character, an impersonator who pledges to remain true to his calling no matter the cost, with life and authenticity ,makes the story both grander and Shakespearean while retaining its captivating folklorish reality. In the story, the impersonator having earned some riches and name for his impeccable disguises is asked to take the form of a dayan (a blood thirsty witch) in the king’s court. The impersonator pleads to the king,

Please consider the supplications of a poor bhand …The disguise would be incomplete if the dayan doesn’t drink a bowlful of the fresh blood of a human victim she has ripped apart herself. O Protector of the Poor, I cannot settle for mediocrity. Before I take on a disguise, and after I have left it, I am nothing but the Lord’s worthless servant, but during the disguise I absolutely lose consciousness and fully enter the new existence. I am not aware of anything else3.
The king is unable to comprehend his plea, having neither the smartness nor the depth to comprehend artist-consciousness during performance. His ministers are equally foolish but they are also kowtowing ‘suck ups’. So they regard the impersonator’s prayer as offensive and proclaim it as a ruse to escape the challenge. Compelled, the next day, while the raja and all the courtiers were sitting in the courtyard anxiously glancing about, suddenly she appeared before them, hissing and puffing, her foot-long tongue hanging out of her mouth … A frightful tumult ensued. This must certainly be a real dayan … Her foot-long tongue was dripping with blood. Her hair flew in every direction. Nails so sharp they could slice through a rock4. 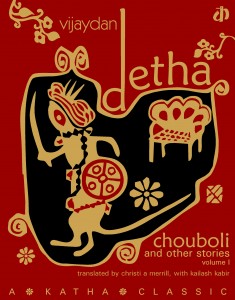 What Detha achieves through this story is not any leap in imagination: he does not play with the plot devices or introduce new players in the game or twist the climax. Nor is this an exercise in style: he does not fool around with rhetoric as a display of skill. Instead, by choosing to focus on the impersonator, Detha makes the readers reflect on social and political injustices, on the inability of  society and its systems to appreciate a common man’s integrity. The same is reflected in The Clever Thief, again translated in English by the excellent Christi Merill (she in fact the translator of a large chunk of Vijaydan Detha’s fiction and has published an excellent translation in English, Chouboli and Other Stories in 20105). In this short story, when a thief, a clever and  compulsive liar,  pledges to say nothing but the truth alone and still carries on with thieving, he is mistaken to be an important nobleman, a wealthy business owner and even god’s incarnation, but is not seen as he really is – despite the fact that the thief answers with candour each time he is asked of his purpose and profession. Through both these tales, Detha dismisses, even chides, the habit of identifying a man through his social status or the caste he is born into or the reputation enveloping him.  As he opens the narrative,

How does one know a man for what he truly is? How does one recognize his real virtues? Who is it who can? Who really knows? And even if one knows, how does one know for certain? Because of this uncertainty, in our country it is the robes of the man which are worshipped, not the man himself6.

Similarly, upon reading Straw Epic and Untold Hitlers, it becomes evident that Detha devotes himself sincerely to the task of holding a mirror to society and has no hesitations in showing its ugly face:  the inability to justly hold power in a feudal, colonial, patriarchal society. He has highlighted issues like domestic abuse and same-sex marriage at a time when, and in a state where, these terms were not even defined in the mass consciousness. Drawing from history, his stories have been modern, and he took to the task of waking up and ushering Rajasthan from a state of stupor into the milieu of the next century. Indeed, that is an artist’s chore, isn’t it: to stir the masses even as they love you, to force them to reflect and dispel their inertia, to show them what is around them and (glimpses of) what will be.

According to reports from a betting website and foreign agencies, Detha was among the favourites to win the Nobel Prize for Literature in 2011 (though we can know for sure only after 50 years when the Nobel committee discloses the list of all candidates). Back home, he has already garnered accolades: he is a recipient of the Padmashri, Sahitya Akademi and Sahitya Chudamani Awards, the Katha Chudamani: a Lifetime Achievement Award and, recently, Rao Siha Award by Mehrangarh Museum Trust, besides being conferred as the Rajasthan’s Ratna on Dec 17, 2012. His stories have been made into movies: Charandas Chor, Duvidha and Paheli, and six other short stories. He is a writer with a significant and   vast body of work, with a style both original and influential. He is avant-garde in Rajasthani literature and has almost singlehandedly raised the language’s literary reputation in the modern era. “There is so much wisdom, detail and dissent in Rajasthani folklore that I felt expressing it in any other language would amount to injustice,” he remarked once. Question is: does the Nobel Committee recognize his achievements and honour him with literature’s most coveted award in 2013?