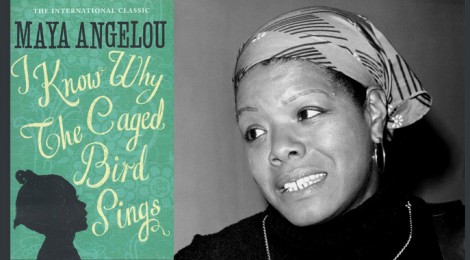 Maya Angelou is given a prominent position in the African-American Black literature for a wide range of reasons. Her writings or novels carry a sort of healing touch to the literary world and bring to light the history ‘from below’ to the present, modern day readers. Angelou’s vibrant and inspirational ideas and outlook are of a messenger of hope and aspirations tied up with human souls. The way she takes her readers to the journey to the interior is exquisitely autobiographical in nature and auto-ethnographic in search for meta-meaning in ethereal life.

I Know Why The Caged Bird Sings is a story of many lives lived to the fullest – aches and pains, harrowing experiences, traumatic memories, unfulfilled desires and still-born dreams. It is of life-time, bitter-sweet memories wrapped up in a piece of torn square cotton picker sack. All the characters are lively, cheering, but not happy-go-lucky. Machines had future but not the characters like cotton pickers in cotton fields. Angelo is not just throwing light on some farmers’ odd jobs, but she does describe their ways and means to achieve something not seen in life. She, in fact, paints her people’s life here:

If the morning sounds and smells were touched with the supernatural, the late afternoon had all the features of the normal Arkansas life. In the dying sunlight the people dragged, rather than their empty cotton sacks. Brought back to the Store, the pickers would fold down, dirt-disappointed to the ground. No matter how much they had picked, it wasn’t enough. Their wages wouldn’t even get them out of debt to my grandmother, not to mention the staggering bill that waited on them at the white commissary downtown.

The empty life and the disappointed day-to-day affairs melt their hearts and reward them with unsettling feelings and emotions from dawn to dusk. Moreover, this novel is about her autobiographical stories knit together to represent the afflicted, mangled, raped, exploited, subjugated, and manipulated by the dominant white in the name of racial discrimination.

The title of the novel, I Know Why The Caged Bird Sings bears the tone of a purpose driven question in a revealing statement form. While these reason bearing words resonate with complex emotions, Angelou pours out her lived experiences so as to give behavioral, emotive and social meanings to the readers of the 21st century. It is indeed worthy to encounter her formative experiences.

Angelou’s style is very distinct that she presents herself in the novel; moreover, she transcends her inmost being in the text to the readers’ close observation. It’s not just her words but knowledge of reality that constructs a society that survived the long imposed ordeals, witnessed the torment of hell beyond imagination and relived mental trauma or agony left behind as a legacy. In this novel, very many people, things and landscape communicate the reality: black oppression, subjugation, depravation, derision, etc. Angelou shows human history rather than narrating with words. She gets into characters and presents their vivid actions and emotions as they experience it in real world situation.

Angelou’s writing gives the taste to acquire fine education and shape the rising generation’s social interaction and emotional experience in the techno-capitalistic world. When people follow their customary expression, Angelou has her own inclinations to tell the world about what she has something highly recommended by the Black Southern life. Her scrupulous heart crosses any invincible obstacle of suspicious notion, offensive thinking, fear of nobody, hatred and coldness of all damages done to human psyche.

Maya Angelou sees through physical and emotional pain that transcends geographical and geopolitical concerns. When you read her works, you read not only the description of setting, characters, narration of events, etc. but also you observe realist human beings representing the oppressed class that outlived the sorrows and sufferings. It is natural to go unemotional amidst trying circumstances, but for Angelou, the world was just like fractured limbs with unforgettable hurts and the inability to forgive the trespassers and miscreants of human psyche. The damage was done to the whole race and Maya Angelou represents all black young girls waiting to taste the life reserved for them. And for many it became a daydream and for some it turned out to be a nightmare.

Angelou vividly presents the daily life and tough spirit of the Black community telling, “In cotton-picking time the late afternoons revealed the harshness of Black Southern life which in the early morning had been softened by nature’s blessing of grogginess, forgetfulness and the soft lamplight.” We can catch the essence of Angelou’s writing through the terms such as ‘harshness’, ‘grogginess’, and ‘forgetfulness’. This ordinary folk’s trying circumstances force them to dwell in the world of harsh realities and accept them as their destined choice for the rest of their life, but Angelou brings hope in the life of rising generation through her make-belief words, thoughts, and deeds registered in her novels especially in I Know Why The Caged Bird Sings.

There are three important issues which anchor Angelou’s entire spirit and they are racial discrimination, violation of modesty or rape, and segregation in the name of “Blackness”. Racial discrimination is not just branding the black community as inferior, savage, uncouth, primal, etc. but depriving them of their honor and dignity. In Angelou’s life, racial discrimination was strongly felt among the black community from birth to death. It can be clearly shown through martin Luther King Junior and the treatment he received during lunch hour when he was denied to sit in the hall along with all other white people. What is important here is that he was given food but not a seat along with other white or honor. He was treated less than a human being because he was a black man.

In the name of segregation, the black community was subjected socially and politically. They were literally made feel emotionally handicapped. There was no room for equality or social status in the dwelling place or vicinity. When it comes to Angelou, she was doubly oppressed in the white dominant society. She was once limited because she was black and then she was further limited for the reason that she was a black girl.

St Paul in Hebrews 12:1 states that “. . .  let us lay aside every weight, and the sin which so easily ensnares us, and let us run with endurance the race that is set before us . . .” This piece of advice from Paul encourages Angelou to dust off all the insults and hurling and move forward to breath the fresh air of honor, dignity, self worth and freedom. In fact Angelou was shaped and moulded by racism and segregation in the south among African-American Black community in the United States of America.

How do you encounter the trying situation set before you? Do you become reactive or proactive? In Angelou’s life, she learned to respond to racism in a healthy way, keeping in mind her posterity. She exhibited her fine manners to make the oppressors understand the worth of human race irrespective of color. She responded to racism not in cynical or satirical manner but in a gentle way. Jean Jacques Rousseau in his essay, Discourse on the Arts and Sciences says, “No man will grossly abuse his enemy, but he will slander him with skill.” It was true in the life of Angelou as a victim of oppression, racism and segregation. Conversely, as a diligent practitioner of freedom movement and writing, Angelou was not just daydreaming about equal rights to the entire Black community in US, but she was willing to pay the price of perseverance and for that dream to come true, she got rooted in steadfast pursuit of make belief life style- I will ‘walk through the valley of the shadow of death,’ I shall overcome this remembered hurts one day, I will see with my own eyes that my posterity taste the delight of equality, honor and dignity in days to come, and I will swim against the current today to see the shore of promising future tomorrow.

Above all, Maya Angelou was tested in the ground of oppression and inequality physically, emotionally, spiritually and socio-politically. She was forged to face challenges in the white world. In fact, she steeled herself for those ordeals. When losing honor and dignity, sense of loss and loneliness might be immense and cut her to the heart but her indomitable will broke those invincible obstacles in times of struggles that accompanied indescribable pain, sorrows and silences. She is a harbinger of peace and harmony, reconstruction and reconciliation, and redemption from black slavery. Angelou took the path travelled by many, but she cleared all the bushes of subjugation, filled up the bumps and portholes of hatred and discrimination, leveled the path with prayer and perseverance and shouldered her own kind when not able to walk on the same path.