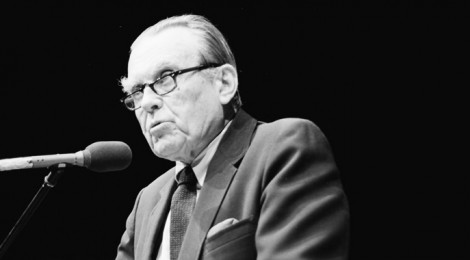 October, 2013 · by Cheriyan Alexander · in Literature

People who lived in Eastern Europe between the two world wars and through the second half of the 20th century were eyewitnesses to historical events of tremendous magnitude. The scale of man-made human suffering that the people of this region underwent has rarely been matched in history. It was also an era that produced a rich and profound literature that responded to the great catastrophes of the time. The poetry of Czeslaw Milosz (1911 – 2004) and Vasco Popa (1922 – 1991) is among the finest and most representative of the region’s compelling literary output from the period. Theirs is the poetry of the spirit of humanity struggling to rise above the tidal waves of history and above the forces that sought to reduce the human person to a pawn in ideological games of every hue.

The great Polish poet Czeslaw Milosz was born in 1911 in Lithuania, then a part of Poland. Milosz went to Paris as a young man and became acquainted with the main currents of European poetry. Returning to Poland, he witnessed the cataclysm of World War II and the subsequent imposition of a Stalinist totalitarian regime in his beloved country. Forced into exile in the United States, Milosz lived the rest of his long life writing about all the horror and the glory that man was capable of.

In a long life that very nearly spanned the 20th Century, Milosz saw some of the most traumatic events ever to be acted on the stage of history: two world wars, the Holocaust, and Stalin’s reign of terror, all of which destroyed millions of lives. The Jewish philosopher Theodor Adorno once said, “After Auschwitz, it is barbaric to write poetry”. For a poet like Milosz who gazed unflinchingly at the century’s barbarity, it was not easy to disagree with Adorno. The enormity of the evil represented by the Holocaust threatened to reduce even the most empathetic poetry to mere rhetoric. In Milosz’s own words, “people thrown into the middle of events that tear cries of pain out of them have difficulty in finding the distance necessary to transform this material artistically”.

Milosz tried hard to resolve this dilemma and has achieved a remarkable measure of success. He has been variously called ‘a poet of culture’, ‘a poet of history’, and ‘a poet of the Holocaust’. While these are rather limiting labels, they can nevertheless be seen as pointers to the general drift of his work.

The wrenching agony of being a survivor of mid-century horrors is dramatically presented in a poem like “Café”(1944).The narrator visits a café in Warsaw once frequented by him and his friends:

Of those at the table in the café where on
winter noons a garden of frost glittered
on windowpanes,
I alone survived

As the narrator touches the cold marble top of one of the tables he becomes acutely aware of the contrast between the pulsing, growing life-force within himself and the cold, inanimate, but solid marble. It is into this inanimate realm that those lives have vanished:

With disbelief I touch the cold marble
With disbelief I touch my own hand
It  – is, and I – am in ever novel becoming,
while they are locked forever and ever
In their last glance,
And as remote as Emperor Valentinian
Or the chiefs of the Massagetes, about whom
I know nothing, though hardly one year has passed,

For the survivor there will always be movement, changes of scene, but each of those changes painfully remind him of those who cannot share in it. He is committed to memories of them all his life:

I may still cut trees in the woods of the far North
I may speak from a platform or shoot a film
Using techniques they never heard of,
I may learn the taste of fruits from ocean islands
And be photographed in an attire from the second half of the
century
But they are always like busts in frock coats and jabots
In some monstrous encyclopedia

One thing is certain though. For all their lack of movement and growth they are posessed of one supreme piece of knowledge unavailable to the survivor. It is this that makes them burst out in laughter at his ignorance as in a vision they appear to him:

Sometimes
…I see in the white clouds
a table wobbling. The waiter whirls with his tray
and they look at me with a burst of laughter
for I still don’t know what it is to die at the hand of man
they know – they know it well.

Despite the tragic tenor of much of his work, Milosz is a poet with a strong spiritual orientation and his poetry is suffused with elements of Christian mysticism. In his poem ‘Thesis and Counter-Thesis’(1962), we find this haunting spiritual paradox: in order to participate deeply in the mystery of being, one must both lovingly embrace the self and be willing to forget it in rapturous contemplation of ‘Being’:

– Love of God is love of self
The stars and the seas are filled by precious I
Sweet as a pillow and a sucked thumb
-It would be most unflattering for adoring men
If the grasshopper chirping in the warm grass
Could glorify that attribute called Being
In a general manner, without referring it to his own
persona

In his autobiography, Milosz records a moment of revelation. It sums up very well his poetic philosophy. Once standing at a beach in Normandy, he found himself reflecting on the ocean’s ability to erase all tracks, all memory: “There is always a taste of nothingness in the roar of the ocean. It is better to seize the small drops of time that are man’s.”

Milosz’s achievement, however, is immeasurably greater than the ‘small drops’ that he in his modesty called his poetry. He has bequeathed a very rich legacy indeed to all lovers of literature the world over.

The Serbian poet Vasko Popa wrote poetry that was stark, intense and allegorical. For someone who lived in one of the most politically fragile regions of the world, his poems are surprisingly tranquil and unemotional. Popa emerges as a powerful modern mythmaker who has embarked on an enterprise of recovery in the wake of the psychic fragmentation caused by that most tumultuous of centuries we have just left behind, the Twentieth. Having lived through an era that witnessed the attempts of powerful and charismatic ideologues of both the right and the left to reduce vast multitudes to a state of regimented conformity, he seeks an image that is elemental and irreducible. In the ‘Quartz Pebble’ cycle Popa deftly manipulates the central image of the pebble of quartz, making it radiate metaphysical and existential meanings that cohere into a viable symbol of resistance and individuality:

Popa is at his meditative best when he traces the interconnections that link time, memory and personality. I can’t resist quoting a finely crafted section from the cycle entitled ‘Raw Flesh’. The section is titled ‘In The Village Of My Forefathers’. Note the spartan beauty of the narrative style and its Zen-like, tranquil movement towards an insight:

Each one asks me
Do you know who I am

The poignancy of the poem comes home to us when we reflect on the way the poet brings to the level of concrete experience the abstract statistical knowledge that history gives us of an age of huge casualties, disappearances of whole multitudes in concentration camps and gulags, and enormous mass transportations of whole populations for ideological reasons.

The amazing flowering of East European poetry in the post-war era threw up a galaxy of prodigies and Vasko Popa was undoubtedly one of the major voices. The distinctly mythic and philosophical quality of his poetry will win him audiences for a long time to come.

One of the functions of literature is to hold, in the words of Shakespeare, “a mirror up to nature.” In every age, and hopefully in every clime, a poet comes along who by the power of his or her pen bears witness to the tides of the times and the impact they have on human life. Historians can surely give us information and analysis but it is to writers and artists that we must turn for the contours of lived and felt experience. We however need both history and literature to show us how the present has been shaped by the past, for as the Danish philosopher, Soren Kierkegaard, once so memorably put it, “although life has to be lived forwards, it can only be understood backwards.”