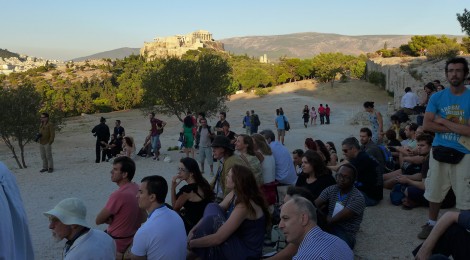 [This article is the second of a two-part series, based on Lakshmi Gopal’s visit to the World Congress of Philosophy 2013 in Athens. You may read the first part, here.]

Of Canons, Cannons  and World Cultures

The strong dominance of analytic and continental methodologies in academic discourse precludes genuine diversity and rigorous engagements with alternatives frames of thought.

Many philosophers have failed to consider that the current problem with philosophy might not be in its practice or its inability to live up to past ideals or singular scientific standards. Instead, it might be the restricted ideals themselves that are a cause of concern. These ideals stand as guardians to change and insist that there are only a few ways of doing philosophy and thinking philosophy that will be considered legitimate for the purposes of the academy. You cannot get a PhD in Philosophy today without a very specific kind of grounding in Western Analytic or Continental philosophy. You cannot think of issues outside the pre-conceived boxes provided by the philosophers of Europe’s crumbling and Imperial Epistemic Kingdom. 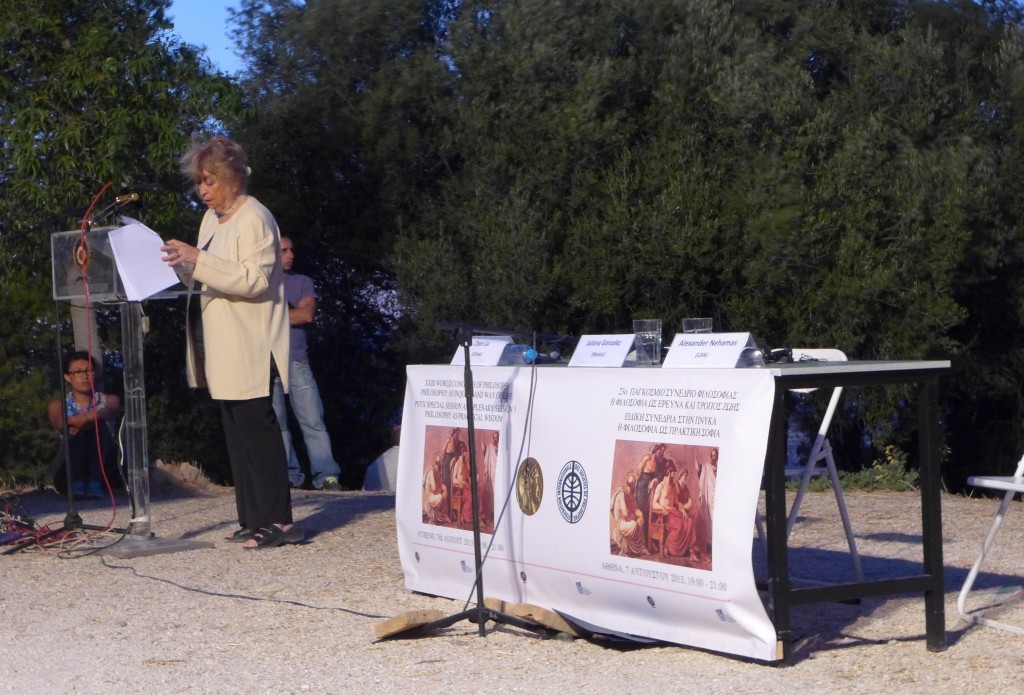 Session at the Pnyx

The Congress participants formed a diverse group across national and class lines. There were a small number of invited contributions made by African, Indian Chinese and Japanese origin scholars, as well as an encouraging number of women scholars. Still, the Congress’ most prominent and prestigious podiums were dominated by white Euro-American males. This was perhaps not only a reflection of an underlying Imperial hang-over that pervaded the Congress, but additionally a reflection on the current demographic crisis in academic philosophy.

The Congress presented a variety of papers on a broad range of topics, including papers presented by Jain and Buddhist monks, presentations on Advaita, the Bhagavad Gita, Lao Tsu, Confucius, and various Sufi traditions. However, few of these presentations managed to overcome the challenge of speaking in their own terms. Discussions were either forced within contemporary frames or pitted against them. While societies such as the Afro-Asian Philosophy Association were dominated by women philosophers, the topics discussed were limited to superficial surveys of over-studied materials. Particularly with regard to Indian philosophy, engagement remained superficial and limited to a range of topics that were popularized by Indologists and promoted through the presence of the British regime in India. Additionally troubling was that most papers on Indian philosophy stayed largely within the fold of caste-Hindu ideas.

The diversity of philosophical approaches at the Congress seemed like a blast from the past. The very same papers from India, China and Africa that were presented at the conference this year could have been presented thirty years ago with very little alterations–despite the fact that these very regions have changed more in the past three decades than they have perhaps in the last century.  Additionally, each nation–or more appropriately each region with the exception of Europe and America, was represented by a very restricted sample of ideas. Notably, few of these ideas presented any real challenge to Euro-American frames. For example, Islam was represented, purely, by its Euro-America approved face: Sufism. India, to a similar vein was represented by Hindu thought. African debate also took part in Sufism and skirted the strong post-colonial critiques on persistent violence and interference in the continent’s affairs. Chinese scholars, present in full force, pontificated on the future of Marxism and communism and the importance of Confucius and Lao Tsu. Greek philosophers ruminated over Socrates, Plato and Aristotle.

The so-called diversity of the Congress made the world of human ideas seem small, suffocating and repetitive. Where were tribal ideas? Where was the Dalit perspective? What about Marcus Garvey, W.E.B DuBois, Malcolm X. Martin Luther King Jr. and the rich ideas about humanity that emerged from the struggles of African American communities in America and Europe? Where was the dissent? Where was the disagreement? One could argue that the call for civility chained demands for dissent. However, the complete void of any ideas that genuinely challenged either the west or western epistemic hegemony indicated that civility was merely an excuse to preserve the status quo.

Thus, though the Congress made claims of universality and plurality, and though it brought together a diversity of peoples and ideas, the contents and treatment of plurality, within the traditional homogeneity of academic philosophical discourse left much to be desired. Diversity was thus transformed into a dangerous form of tokenism. It is dangerous because here the token stands divorced from its original context and therefore stands to represent the whole of which it forms a mere part. For someone who is not acquainted with Indian philosophy, the highly limited palette of Indian ideas available at the conference would seem like a veritable smorgasbord. When caste-Hindu ideas become projected on the global stage as “Indian” ideas, divorced from alternatives and dissent, the call for diversity at the global sphere translates into the empowerment of hegemony at the local and the national sphere. For this reason, diversity itself must also be deeply interrogated.

If philosophy continues to embrace its traditional canon, it is unlikely to have a robust future. Nonetheless, even if philosophers embrace diversity and break down walls to allow the circulation of a broader set of ideas, the path remains arduous. Today, philosophers have the capacity to construct new and more inclusive epistemes. The work becomes harder than what has been done in the past because it demands creativity, craft, attention to detail and precise interdisciplinary expertise. Such global conferences offer a starting point for such hard work. However, unless attention is given to continuously broadening the debate (especially beyond participation on the quixotic terms of nationhood) then this attempt at the creation of a global community of philosophers could quickly dwindle into cliquishness.

This challenge does not mean, as McIntyre does, that the very existence of philosophy is under threat. This seems like a tall claim. Philosophy pre-existed its academic institutionalization. It persists and arguably, so long as human beings have use for systematic thought, will continue to persist. However, for all practical purposes, it has ceased to be housed in conventional philosophy departments. Instead, new ideas are being made in Gender Studies, Film Studies, Sociology, Anthropology and, as a noted legal scholar remarked in courtrooms and policy making forums. A myriad of other disciplines have developed thrived in the contemporary void of relevant and engaging philosophical discourse. Ironically, one could argue that philosophers are no longer at the cutting edge of philosophy. The natural question that arises then is: “Who is?” The most likely answer is no one, and this is where the threat to philosophical analysis lies–not in the disappearance of philosophy, but in the persistent practice of shoddy philosophical analysis.