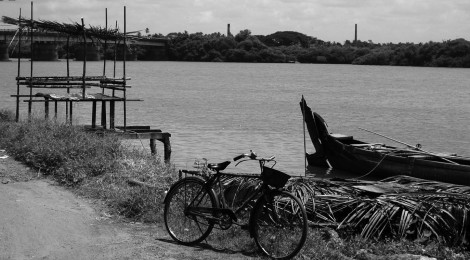 Death of a Thief

Our village thief is dead. My mother’s email announced early one morning, early enough for me to realize that the death must have happened earlier still and probably at that hour which could interchangeably be thought of as night or as dawn. More than a few years have passed since I left the village and I cannot now think of the concept of “village thief” without a bit of amusement. He was a part of my childhood though, a part of those memories which connected me to the village I grew up in. News about death almost always warranted the talk about how good or great the person who died was. There is immediate scampering and scrambling for the things that made sense in the whole story of his life.

This was the village thief. What could one say about him? And how much? The best one could possibly say is “Inna Lillahi wa Inna Ilaihi Rajioon” and at least in his death, leave him alone. My mother must have had her thoughts running regardless and this is how her letter read.

When morning came and with it the news, I could not help thinking about writing to someone. Who, but you, would care to read long emails and write them too? I’m still beset by shock as I write this.

I have long thought that a life like his is lived only in the purpose of straightening out by the end. My optimism never rendered a thought any worse. Yet, all his life seemed to lose purpose the moment he died.

Think about Haroon, for a moment. You might remember him as the only known thief in our village. For all of us here, Haroon’s story goes further back to the time his mother first came to live here. The father must have died much before. At least I have no recollection of seeing a father. Vamban, though many might think is a title he earned by thieving, is actually his family name. They lived right next door, in a shed that was built in our own compound. Yes, you may have seen the ruins of the shed now, next to our gate and beside the river. The whole family moved out when Haroon was still young… and, yes, we had already heard about the stealing episodes at school, a little before they moved out.

In those days, the government used to build houses for those who were poor. Haroon’s family was poor. They did not see another opportunity ahead to own a home. And so, they seized it. Of course, one still had to pay for it and the people of our village contributed. I remember, my mother did too.

We still heard about him stealing one thing or the other, every now or then. To state the obvious, this did not get him any good marks at the school and before long, he was out of there. Out in the world, to make a living as life would permit him or to live as his passion instructed. I call it passion because I could not see any other pattern to it. Remember those crime investigation movies we used to watch in the 90s? There had to be a motive to any crime. Haroon didn’t have any. He seemed to enjoy the act of thieving more than he derived any direct benefit from it.

Have you ever heard of Haroon stealing a large sum of money? Neither have I. When I come to think of it, it seems improbable to me that he stole anything but women’s clothes and dupattas and undergarments. He was, in those days, like an impending rain. We would run to fetch our dried clothes from the clothesline, when dusk came. If we didn’t… Well, you know what happened next.

Your grandmother told me this morning that he may have eventually got into a larger nexus. But, it is just hearsay. The story goes that while serving stints in prisons across the district, he may have come in contact with some bad people, other thieves I presume, from villages and towns far from here. In what was rumored to be the worst stretch of his life, he partook in several violent cases of organized crime. In true ‘Ripper’ style, the gang would tend a blow to the head of an unsuspecting victim, take all the valuables he had and leave him for dead. This, most certainly, I find hard to believe. At the worst, if he did anything minutely similar to what Mother stated, it would be paradoxical to the life he eventually led here till almost the very end.

Every single time that he was caught, people would beat him up until he was pulp. Only a few in our locality would hand him over to the police. In the earlier days they used to say, “not the police, but a good round of beating will change him”. Did it? And in later years, they did not explain when they beat him. They just beat him.

In the few times that he served prison sentences, it was only for a short while. Your grandmother though, tells me that he has been to several prisons and served even longer sentences. In her version of the fact, she claims that the apparent change in the man came after one such long sentence. This was purportedly after the ‘Ripper’ incidents. The police caught up with him and he was sentenced to a few years in prison, the longest such sentence.

When he came out, most people loathed him more than ever. The fishing community, outsiders as they were, took him in. They probably felt the need for an additional help in their work. Fishing is not considered a great option of career anymore, I hear. Fishing changed Haroon. He became the Good Samaritan we all came to know him as, in recent years.

There were instances of missing clothes even after that. Ahmed went and asked him once, only to be answered in denial. There was nothing to say that he did it. Someone else could have been doing it. The clothes, like always, would be found lying in the post office or in the cinema or in any other public place. Life has brought us all better times, better enough for us not to bother about the occasional missing cloth. And we never suspected Haroon anymore. He made a living out of fishing and he came to help whenever one needed any.

Ah yes, you remember that, don’t you? The time when the houseboat full of tourists tilted. Two of them almost drowned. Haroon led the pack of rescuers. He was quick to act. And only months later, the lady who jumped into the river. She must have been thinking of suicide, but she definitely needed help. And Haroon was there. He singlehandedly saved her life. Did you also know that for these acts of his, he won a reward for bravery from the village Panchayat?

The clothes would still go missing. And we didn’t think much about it. Affluence had crept in to some extent. We should have noticed. Nevertheless, the clothes turned up at another place the very next day. As long as it was not jewelry or money that we lost, we bothered not much. Some feeling within always told me that as long as Haroon was around, no major thief would dare to enter our village. Yes, he could have been quite a Vidocq.

After all this, his death seems to be a cruel blow on our feelings and our instincts. For the villager, it seems to be normal that his death is what it is. For me, it is difficult to pretend not being shocked. I had long stopped believing that Haroon would steal anymore. And I had sensed goodness in him.

You know Aunt Zareena who lives on the other side of the river, don’t you? She lost her brand new saree last week. Not just the saree, but the blouse and undergarments, as well. Of course, they were not too sure as to what happened with it and their part of the village was not Haroon’s regular turf anyway.

When the villagers found Haroon this morning, he was entangled in a bunch of electric wires between Zareena’s house and the compound wall. He was wearing the saree that went missing, complete with the other missing accessories. Electric shock from a live wire killed him. What happened in the late hours of the night or the wee hours of the morning, one can only imagine. When the news came to me, I felt the shock in all its brutality reach out beyond the river in between, and right into my heart.

And I knew I had to write about it. To you.

Call me when you get this email.

I contemplated calling her, only for a moment. The next moment, I closed the email and chanted to myself: Inna Lillahi wa Inna Ilaihi Rajioon. Indeed, we are from Allah and to Him we return.