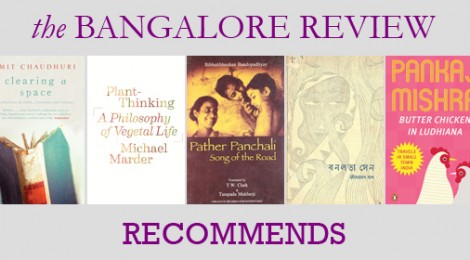 1. Clearing a Space: The Past in the Present (2008) by Amit Chaudhuri
Clearing a Space was published in 2008, a year after I’d finished writing my doctoral dissertation on Amit Chaudhuri’s fiction, essays, poems and music. For years I’d sat perched on the writer’s words like a bird, waiting for the researcher’s proverbial early worm, reading his mind like a hunter would a beast of prey. And then this book arrived, a collection of Chaudhuri’s essays on literature, culture, the arts, written over nearly two decades, and I was filled with regret, the kind a doctoral student must feel when writing a thesis about a living writer. Yes, Clearing a Space is Chaudhuri’s intellectual autobiography, but if it had been only that the book would have been bird feed to only a group of migratory birds (like myself). Instead, it turns out to be the literary biography of artistes like Chaudhuri, writers, musicians, filmmakers, painters, who live on the happy and productive cusp between a deep-throated cosmopolitanism and a fine-tuned provincialism. With his essays on Rabindranath Tagore and Satyajit Ray, for example, Chaudhuri establishes a literary lineage that is an education for many writers writing in and about English India, people who write without a sense of belonging, to a literary tradition or a people and place, especially the nouveau-literary who write and read books as if they had been auctioned at a garage sale. Clearing also contains Chaudhuri’s extraordinary essay, “Notes on the novel after globalisation”, arguably one of the best studies of the life of the contemporary novel, the ones we read, write and like to inhabit, even if only with a parking ticket. This is perhaps the best book on ‘Indian’ literary criticism yet.

2. Plant-Thinking: A Philosophy of Vegetal Life (2013) by Michael Marder
I came to Michael Marder’s life-changing book after I had already become a convert. In that, Plant–Thinking came to me not as a series of shocks but empathetic recognition in instalments. I was reassured from time to time, from page to page, that I was not alone, that my (obsessive) affection for plant life was perhaps not really a disease. With years, the breadth of my social interactions had decreased – my life was now like a palm gradually folding on itself. My garden had grown, first from pots spilling over to floor space on the terrace and then into our backyard where I anxiously fought men and animals, co-conspirators against my green children. It was when a professional gardener came home in my absence and de-weeded my plant pots that I realised that something in me had changed irreversibly: I wept inconsolably all night. “If animals have suffered marginalization throughout the history of Western thought, then non-human, non-animal living beings, such as plants, have populated the margin of the margin,’ writes Michael Marder. Here was a thinker saying it for me, for my children. I hope this book will cause a revolution: I refrain from using the word ‘bloodshed’ for plants don’t bleed red.

3. Pather Panchali – Song of the Road (1929) by Bibhutibhushan Bandopadhyay
I watched Satyajit Ray’s film before I came to Bibhutibhushan’s book. I had not been on a train until then (I must have been forced to watch it by my father when I was six). Having inherited the modernist Bengali’s wanderlust from my parents, I thought of Ray’s film as a travelogue. For years I’d think of the film and the journeys made in it: the railway tracks, in Ray’s camera, looked like fate lines in the film’s horoscope. I’d later discover the significance of journeys for the men and women in Ray’s films. But before that, my mother would read Bibhutibhushan for me, in instalments. And the world before me and inside me would change into a thing of wonder: the everyday, so neglected in the books I was given as a child, turned utterly joyous and sensuous in my mother’s voice. Rain fell on my face, kaash flowers tickled the air I breathed, train smoke curled my eyelashes. I have lost count of the number of times I’ve read Pather Panchali. It is my comfort read: it never fails to reassure me in my belief that all great literature is constructed as a travelogue, geographical or intellectual.

4. Banalata Sen (1934) by Jibanananda Das
Of all Bangla poems I know, “Banalata Sen” must be the one that’s been translated the highest number of times. Doesn’t that say something about the poem? I discovered Jibanananda on my school syllabus, not the happiest location to find a lifetime’s love. In this poem about the missing woman, a lover for whom the man had walked through centuries, through several cultures, through despair and longing, all to ask the question, ‘Aeto din kothaye chhilen?’, Where were you so long? The poem also gives the title to Jibanananda’s third collection of poems. In this remarkable earth-biting series of poems I would make recurrent self-discoveries: about my father’s ancestry in Natore, yes, but also those invisible relations which would affect the choices I would make, how I would live and more importantly, where I would live. Ducks, sparrows, crows populate his poems – I wanted to live in them. And then there was the grass, the most marginalised of all living creatures I know. In his poems and outside them, I have watched out for them, holding my breath every time I had to trample on them.

5. Butter Chicken in Ludhiana (1995) by Pankaj Mishra
It is difficult to describe the importance of this book to a post-Facebook world. Suffice it to say that it served as the DIY book on writing in English for small town India. Until then, no one had known about – or cared for – writers from nonmetropolitan cultures. R. K. Narayan had given us Malgudi, but Swami and his friends belonged to a culture that was genteel in a fantastic way. The definition of ‘fun’ had changed post 1991, that palindromic year that supervised so many changes around the world. Mishra, phenomenally well-read for a man of such young age, balancing honesty and reserve in life and language, travelled around the country on a shoestring budget, eavesdropping on gossip as if it were news on satellite television, tying his shoelaces to leave just at the right time, all this to produce a biography of a nouveau aspirational nation. Mishra was messiah: he became appropriated as the poster boy of the small town writer. The fact that he had ‘inaugurated’ Arundhati Roy’s The God of Small Things into the literary world upped his worth even more. Perhaps even Mishra had not realised the impact that his compelling narrative would have. It inaugurated nonfiction as a genre in fiction-dominant English India. And it gave energy to narratives from the provinces: every time I read Amitava Kumar and Siddharth Chowdhury writing about Patna, Anjum Hasan on Shillong and Bangalore, Tabish Khair on Gaya, Basharat Peer and Rahul Pandita on their Kashmirs, I think of Pankaj Mishra and his landlord in Mashobra. And the smell of Himachali apples fills the pages of my book.

[Every month, The Bangalore Review recommends a reading list, also mentioning in brief why each book must be read. This month’s list has been compiled by writer and poet, Sumana Roy.]