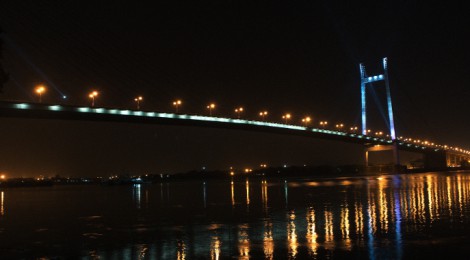 I suppose a certain kind of Calcutta novel can be written. By a certain kind of Southern Avenue Calcuttan such as me. These are read in bits at bookstores. New-age bookstores in Delhi, Bangalore and New York. Southern Avenue, the green corridor of South Calcutta, therefore, forms a hotline between the raw material of Calcutta and the globally marketed commodity that is Calcutta. I suppose people who measure their muse’s surplus value should not be trying to write fiction. So I must not be the fiction type. But the return of the prodigal calls for some indulgence. I have no money. Hence fiction.

My mother brought me and my brother to our Southern Avenue home when I was in grade five. My brother was in grade three. We had come back from Singapore. Divorced. People made sympathetic eyes at my mother. She had cut her hair very short to shock the sympathisers. She had started taking guitar lessons and made art friends in Shantiniketan. She was thrilled with individualistic triumph. A wronged and voyeuristic community gathered to watch her rebellion in horror. The partner she had left behind was a hefty businessman. She made some money out of the divorce, they said. She started learning the guitar too. My brother Zac grew to be rather good at it. I headed towards literature, and then to the United States. Made predictable stops at post colonialism), structuralism, semiotics and such, and landed softly in my mother’s home.

Our house in Southern Avenue was pretty much the way I had left it eight years ago. It was one of the few old houses that had been repainted recently. Traffic edged along the Southern Avenue boulevard towards Hazra More, narrating its daily failures. It had begun to be a little chilly in the evenings. These were days following Kalipujo. People had begun making plans to exploit the weather and get out of the city. ShankarpurMondarmoni, and of course, Shantiniketan. A gang from among his school-friends were going up the next weekend. Anuseh was performing. And some new-age Pakistani British band. Ma was already there conducting a puppetry workshop.

I was Zico to the school gang. Deb to the Americans.

Gelei hoy, I said on the mobile. (Might as well go.) I didn’t have a class on Friday, so it wouldn’t be a problem. The line went out. And the taxi roared inches ahead. I don’t drive; which was a joke between my brother and cousin – Zac and Chico. Ma had a driver. Chico had offered to drive them to Shantiniketan, but there were too many people, so taking the train made better sense.

The taxi left from Hazra more,nto Kalikinkoritala Lane. A lane of bus operators. Raddiwallahs. Ganjakhors.(Peddlers of recyclables. Weed smokers.)It’s the kind of urban nausea that mostly looks beautiful in a film. The real bodily suffocation, the stench, all of it is intolerable.

The first time I had come here was when I was in high school. I had walked up these dark stairs where bats and the poor hid at night. A dim streetlight warmed them through a pigeon’s nest situated high up the crevice. I came here to score from Reza Or Raja. Whose sister was Zeenat.Jhinat. We smoked up behind the garage where Reza worked. The siblings were the same height, and looked almost identical. With large eyes and a thin mouth. Zeenat was perhaps a year older. Two decades had passed. I had come back from the graduate stint in Massachussetts and the post doc stint in Amsterdam. Back to Kalikinkoritala Lane. Looking for Zeenat. She would probably be fat, married to a transport operator, a mother of five children. I was the kind of person who now wanted to be in intensely intellectual relationships. Discussing books and films, taking long walks, having arguments about global politics in a house with a large table piled with papers, books strewn about and brilliant sketches crumpled and thrown carelessly around.

An era of hungry afternoons unfolded between Jhico and Jhinat. Raja didn’t know for the longest time. I guess boys like me are expected to have first loves like Jhinat. They had to tell stories about the time we went slumming.

Tuishaalamamdobajipeyechhish (you think this is a fucking joke) – Raja had said on finding out. Later he had said he would charge fifty bucks extra for dope.

Raja died while I was in college. Dating a French girl I had met at Alliance. I had wanted to go to their house when I heard. But Zeenat had stopped me. The death had a Hindu-Muslim angle. Their uncles were not going to be happy. I didn’t try to find out the details. Somehow, it felt that the time had come to extricate himself from Kalikinkoritala Lane. I stopped calling. Zeenat was very good at sensing these things. She knew, she sensed.

It was with Lis, the French girl, that I started living the city through its riverside. She liked sitting at Outram Ghat for hours and watch the boats and smoke. She was taken by all things romantic. The combination of her short curly hair, smoking voice and endless desire to embrace all things beautiful made her unattractive. Zeenat came to my mind. The mocking look in her eyes. Like she was pre-empting the world’s plan to screw her over, before it actually did. Things like the beauty of the river would bring only a bitter amusement across her face. She knew sex was about sex. She knew money was about money. She knew men. She knew their very core.

There were still thirteen exams to grade. It was a bit funny the reverence these kids had for Shakespeare. Teaching Hamlet in Calcutta in the winter was, all in all, a bit funny. I had thought it might be apt to take students to the Park Street Cemetery and read out the gravedigger scene. But these students would probably not find it amusing. They were too eager to master, to become the pundit. Most papers were geared around finding the most obscure form of greatness in the play. Someone’s darting eyes. Another person’s guffaw. An abrupt end to a speech. I hadn’t been keen to teach the course. Sujoy-da, an old friend and now boss in the department, asked me to step in. The old ADG, who answered all questions in Shakespeare quotes, was not well and off for the semester. I had to get these in before Sunday. By mid-week definitely, if I wore the shoes of a Calcutta-professional. But they were a bore to read. Not that I was reading anything very profound. I’d read some new-age Indian English novels in the past two months. All of them concerned sexual awakenings, jet setting Indian-ness, Bombay, Shanghai, London, poor slum boys, mad mothers and a desperate plea for a global audience. A few of the more recent academic links were passed on, books and anthologies written and edited by friends. Nothing path breaking . Interesting enough however, to get publishers to put their money on it. I hadn’t written in close to a month. Which was a nightmare. But less so when the surround was a resigned Calcutta.

The cycle repair shops at the mouth of Kalikinkoritala Lane were the same as I had last seen them. The taxi stopped in front of what looked like a rather new stationery store. Above the store were the two floors in which Raja and Zeenat lived with many aunts, uncles and cousins. Behind it was the garage,home to two cats. Sisters- Ashar and Bhadro. They were no longer present though. Where do cats go? Unless they die in road accidents. Do they die of Alzheimer’s or arthritis? Trees are loyal neighbours. There was a tree somewhere on this street. It may have been cut down during the heavy rains. CESC often cuts big trees for their work. In the west, school children would wear t-shirts saying ‘Save our tree’. The treeless-ness of this old Calcutta street, with no legitimate claim to heritage, would be beautiful to an audience in California.

Should I say – Zeenatkiekhanethhake? Or Eta kiZeenatbibi’rbari? (Does Zeenat live here? Or, is this Zeenatbibi’s house?)

Or should I just walk up the stairs? I stood across the lane, next to a raddi(recyclables) shop, lit a cigarette to address the dilemma.

There was no such thing as a pure return. Saran had said. I had laughed at the faux wisdom. They were talking postcolonial anxiety. And how un-feminist it was of him to think that Zico would go around the world and come back and Zeenat would remain, just where she had been, waiting for him. Of course, her life had taken its course. Of course, she had provided a nice vent for his intellectual hatred of the people and the society that populated his life.

Ma had wanted me to stay in the west. A degree in comparative literature and a rather disjointed thesis left me weary of the pressures of western academe. I came back to Calcutta. Although a cleverer thing to do would have been to strike base in Delhi.

He turned to the old raddiwallah. Who stubbed a bidi next to him.E-baritakader? Ekhaneghiyasuddin-babuname ekjonthhaktenna?(Whose house is this? Didn’t a Mr. Ghiyasuddin live here at some point?_

She tohkobebikkirihoyegaechhe. Byabshabondho kore dilo. Meyetarbiyedilo. Bihar nakothhayejano.(Oh, that house was sold off aeons ago. They shut down the businesss. Married off the girl. Bihar or somewhere.)

Oh… kothayethhakebolteparben?(Can you tell me where she lives?)

The business is predictably sold off. The girl was married somewhere in Bihar. She had died at childbirth. Now a Marwari paper business runs here. I could be Dilip Kumar right now. A predictable end to this story would be to go andfind dead Zeenat’s lovely child- with a head full of thickcurls. Take a timeless black-and-white photowith the kid perched on my back, where I look tired and happy in a black shawl. But, Zeenat is of course dead. Or lost forever. Maybe there was no Zeenat. Maybe she had merged with ZeenatAman.

At this point, I must smoke copious amounts of narcotic. And write a book about philosophy love and drugs. And mock the middle-class for their empty existence. Drugged by consumer capitalism. Or write a rambling novel such as Susan Sontag’s I, etcetera. And then look for a book contract. Zeenat must be memorialized. I have not enough loverly zeal now to go to north Calcutta. I have not enough loverly zeal to chop the hands of those who carry the ivory towards building her a breathtaking mausoleum. Here lies Zeenat. And all that jazz.

Maybe I will start a publishing company named Zeenat. Or a chewing tobacco company.

Image: Flickr. An evening beneath a bridge by Abhijit Kar Gupta. Some rights reserved.