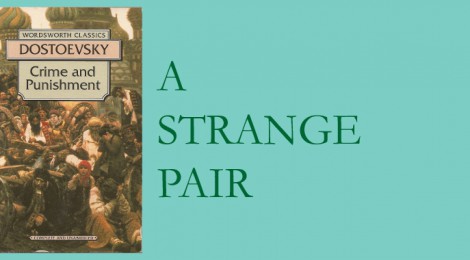 In the middle of Crime and Punishment Dovstojesky – otherwise sticking tight to his characters from beginning to end – takes a brisk leap back: so vertiginous it leaves the reader dumbfounded, spellbound. What did possibly happen?

It’s the end of the scene where Raskolnikov confesses his crime to Sonia, the young woman who prostitutes herself in order to support the family. The entire episode is poignantly loaded with emotion, then the camera clicks. Here’s a frozen frame. A still life.

Up to that very passage the author only mentioned his characters by their names. Suddenly, as if sucked away at increasing distance, he says: “here they are, the criminal and the harlot…” Thus we see them no more as Rodjon and Sonia but as two categories, two archetypes, both atemporal and ubiquitous. How could we miss them? The condemned, the bound to the gallows (doesn’t matter if guilty or not, even Jesus belongs to the team) and the whore.

When the author points at the picture’s predictability we agree… we’ve seen it before. They are together as expected. But why? Why the murderer, hopelessly malicious and malignant, why the damned doesn’t search redemption in the arms of, let’s say, a priest or a nun, his mother or father, a wise man, a teacher, a sibling or a friend?

He seeks not the comfort of nature or the innocent stare of a child. He can only find solace – in fact something more – in the company of the abject young hooker. The lost woman (very recently lost, thus adding naivety and vulnerability to her shame) is the one he picks for improbable salvation… What can she do for him? Not much, but he expects she will understand him, forgive him, even love him in spite of his horror.

First because she shares in the horror. She is also at the bottom of social and moral ladders, thus she has no right to blame him. But somehow – in that very place – she’s not mean or cynical. On the contrary she produces the rare virtues of compassion, forgiveness, plus an evenness of mercy less human than divine. How so? Isn’t it a complete contradiction?

Apparently not, for the match became such an icon, such a common place, the author can just zoom out and say “look at them again: the murderer and the whore”. And we think of Jesus and Magdalena, Dulcinea and Quichote. Or closer in time Rose, in Graham Greene’s Brighton Rock: not a whore but a dejected creature with nothing to lose, apparently nothing to give… still the truant choses her as his victim/savior.

Isn’t it the story of Beauty and the Beast?

Not exactly, though there are affinities. Beast is there, no doubt: him that society so defines. Beauty in the fairy tale is no hooker. Not explicitly, though she’s somehow lost. She’s dad’s youngest daughter, the one who asks for no present when he comes home. To see him safe after his journey is enough. She’s contented with his love or rather with her love for him, almost uncaring for reciprocation. In psychological terms her self-image is poor, at least on a surface level. She thinks little of her own rights… When she needs to be “given away” to an unknown master – in order to rescue daddy’s life – she accepts without a blink.

Who’s the girl who instead of marrying is “given” to the monster, if not a worthless daughter, who can be painlessly offered to the enemy, winner, conqueror, as a slave or a concubine – in other words as a whore? When she arrives at Beast’s castle (as a payment in flesh and blood) Beauty has no more father or brothers to protect her in case her new owner, let’s say, had some quirks or wanted to abuse her. When she arrives Beauty belongs to nobody, meaning everybody or whoever comes first. That’s a prostitute’s definition.

Still her kind soul makes her appreciate Beast in spite of his apparent abjection… Her love performs miracles, causing him to shed his repellent husk and reveal his secret handsomeness. It’s no doubt an alchemic process, resumed as following: love from a helpless creature – without defense or defenders – wins against attack and aggression, melting those weapons for the very fact of not opposing them.

Therefore, choosing the young whore as a savior means choosing the most abandoned being, who while in danger will find no supporter. Such condition makes her somehow unworried, unaware of danger. On a raft, wretched in the middle of the sea, she doesn’t mind to get wet. Already the talk of the town, she doesn’t fear criticism. Outlawed, she’s not really concerned about police or justice. Her trouble sets her free. She can take a risk: it is simply one more.

On the other end, by lending a hand to the demonized, to the man in trouble, Beauty/Whore finds some advantages. Here’s a guy who’s not going to ask her for the one thing she is meant to trade. Or not only: he might want sex but he’s seeking more. Even sex, with somebody in peril – close to death or condemned to death – has a quality of emergency automatically lifting the exchange at another level, attributing to the sex provider a different status.

When Christ meets Magdalena she is a gorgeous sinner whom he forgives. Then she becomes his friend. Then his mother’s best friend. Then she’s the first one to see him resurrected. A whole other dimension unfolds for her, though her social status probably didn’t change in the meanwhile. Not that we know: neither Jesus nor his disciples married her. But through her devote understanding she found a new place for herself.

Same for Dulcinea, who will become the lady seen by Quichote in his folly. Seen through her rags and her shame: sheerness is probably a keyword in this equation. When the characters meet they both pierce the surface. They guess the transparency. The hooker sees the desperate being inside the criminal, mentally disturbed, rebel, deserter, whomever the world has condemned. He sees in her the universal woman, the angel, the priestess.

As we know, originally those functions were associated. Maybe the archetype is rooted in buried memories of a sacred girl: cast off, separated, non belonging. Living in a sanctum and supposed to give the “client” both physical love and prophecy, augury or vision. Truly precious gifts, in case of a major trouble.

Maybe long ago criminals found refuge in whorehouses, just as later – from the Middle Age to our days – they found it in church. Maybe there was a time where the two places (brothels and temples) were not at the antipodes. On the contrary they were homologous. The memory of such concept is lost in the obscurity of the past. But small shards, out of contest, revive in the mind of the novelist, who moved by an invisible hand paints that weird vignette…

A half naked girl, her hair of course undone… a man on the run, perhaps clad in a dark cape, with blood on his hands.

One last kiss. One last blessing from the womb he came from and where he’s about to return.