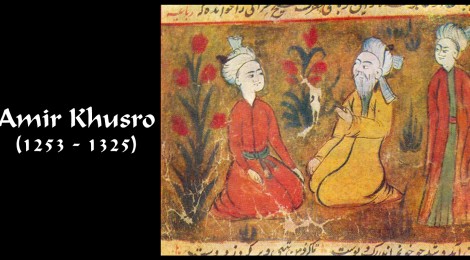 Hazrat Amir Khusro was born in AD 1253 and died in AD 1325. In these 72 years, he made seminal contributions as a philosopher, mystic, scientist, historian, diplomat, tactician, and above all, as a poet and musician. Much of this is either lost or remain only in manuscripts confined to library shelves. His poetry and music, however, have spawned not one but several living traditions that flourish to this day.

In respect of music, Amir Khusro is today credited with a bewildering number of inventions and innovations. According to many, he created musical instruments like the Sitar and the Tabla, composed new Ragas like Yaman and Zeelaf, Talas like Chakka and Soolfakhta, and created musical forms such as the Qawwali, the Khayal, and the Tarana.

Ultimately, the order reached India through the efforts of Khwaja Moinuddin Chishti, popularly known as Gharib Nawaz, or ‘protector of the poor’. Born in AD 1138-39 in Sajistan, Iran, he took to mysticism early in his life. Legend has it that once, when he was in a trance, he felt the Prophet Mohammed himself order him to settle down in Ajmer, which he did in 1190. The Chishti order thus took roots in India, and continues to flourish to the present day. It boasts some of the most exalted Sufi mystics of all times, including Khwaja Qutubuddin Bakhtiar Kaki, Khwaja Fariduddin Ganj-e-Shakar of Ajodhan (the present-day Pak Pattan in Pakistan), and Hazrat Nizamuddin Aulia, the mentor of Amir Khusro.

Hazrat Nizamuddin was born in AD 1238 in Badayun, a town near Delhi. In his early years he aspired to become a qazi. A chance meeting with a musician led to his hearing for the first time the name Khwaja Fariduddin, for whom he developed an inexplicable reverence. In his eighteenth year he went to Delhi and met Khwaja Fariduddin’s brother Sheikh Najibuddin Mutawakkil. One day Nizamuddin asked the Sheikh to pray so that he may become a qazi. The Sheikh remained silent. On Nizamuddin’s repeating the request, he said, ‘God forbid that you become a qazi; be something else!’ Shortly afterwards, the call of a muezzin awakened something in him. He promptly set off for Ajodhan, without even taking any food with him.

At Ajodhan, Khwaja Fariduddin had already received a premonition of Nizamuddin’s arrival. He readily accepted Nizamuddin as his disciple, and eventually made him his successor as the khalifa (head) of the Chishtiyya order. Hazrat Nizamuddin then went back to Delhi and on divine inspiration, set up a khanqah (or monastery) at nearby village called Ghiyaspur. He gained renown for his piety, learning and wisdom, matched with an overwhelming compassion for the poor. In this compassion he was stubbornly resolute, which earned him the wrath of emperor Ghiyasuddin Tughlaq himself. The emperor even threatened to destroy Hazrat Nizamuddin’s monastery when he returned to Delhi from a campaign. The saint is said to have merely murmured ‘Dilli door ast’ (Delhi is far away). Sure enough, before the emperor could reach Delhi, a canopy collapsed and killed him. In the same year AD 1325, Hazrat Nizamuddin also died.

It is beyond dispute that Khwaja Moinuddin Chishti and Hazrat Nizamuddin Aulia made seminal contributions to the establishment of Sufism in India. This school of thought quickly attracted followers, since people perceived it as a relief from the strict rigidity preached by the Hindu and Islamic orthodoxy. Indeed, the Sufi tradition in India represented a confluence of the best that either religion has to offer, and due to its syncretistic and non-prejudiced outlook, it has been instrumental in promoting harmony between the Hindu and Muslim communities.

Different sects adopted different methods of dikr. Unlike the Suhrawardi and the Qadri, which found music objectionable, the Chishti and a few other orders laid emphasis on samaa, that is, dikr through ecstatic singing, dancing and so on. It is from this spiritual context that Amir Khusro’s monumental contribution to literature and music emerged.

Amir Khusro’s father was an immigrant from Turkey, forced to flee his home due to repeated Mongol invasions. He settled down in Delhi and soon acquired a position of prominence. He married the daughter of Imaad ul Mulk, an Indian by birth and a nobleman in the court of emperor Ghiyasuddin Balban.

Khusro’s Indian ancestry exposed him to the greatness of Indian culture, especially its music, for which he developed a special liking. He was never an attentive student, but discovered an abiding love for poetry at a very early age. This, coupled with his equally strong spiritual inclinations, led him to Hazrat Nizamuddin Aulia at the tender age of eight.

There exists a legend that he was initially reluctant to go to the saint’s khanqah, and his mother had to literally force him to accompany her there. When they reached, he refused to enter the monastery, and instead, remained standing outside its gates. He then composed in his head the following lines:

You are a king at the gate of whose palace
Even a pigeon becomes a hawk.
A poor traveller has come to your gate
Should he enter, or should he return?

Hazrat Nizamuddin, sitting inside the khanqah, read the thoughts in Khusro’s mind. He immediately dispatched a servant to read out to the young boy standing by the gates the following:

O man of reality, come inside
So you become for a while my confidant
But if the one who enters is foolish
Then he should return the way he came

Khusro was so impressed that he decided forthwith that he had found his spiritual guide.

Over time the love between mentor and disciple grew to such sublime proportions, Nizamuddin even declared that had his religion permitted it, he would have wished for Khusro and himself to be buried in the same grave. This bond between them also formed the inspiration behind the finest of Khusro’s poetry. Written in both Persian and Hindavi (the tongue spoken by Indians in and around Delhi), his works speak of his erotic love for his mentor, through which rapturous state he sought to access the divine. Indeed, rapture is the fundamental characteristic of his poetry. Once, he chanced upon a dhunia (cotton carder) at work. The rhythmic twanging and buzzing of the carding instrument led him to compose:

The words make little sense literally, but the repetition of the same words over and over, coupled with the strong underlying rhythm, heightens and reinforces the sense of ecstasy that is the objective of Sufi worship. According to some, this ecstatic repetition is what coalesced into the tarana form of classical music.

Amir Khusro was also an astute politician and tactician. He served no less than eleven kings spanning three important dynasties. Clearly, his diplomatic skills were of a very high order, for he managed to remain in royal favour even in such turbulent times.

Hazrat Nizamuddin Aulia died in 1325 at the age of 95. Khusro was in Awadh at that time. When he came to know of his mentor’s demise, he was inconsolable and declared he would not live long either. Within a few months his prediction came true, and a still grief-stricken Amir Khusro joined his master in the other world.