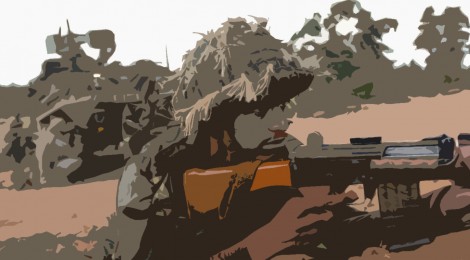 Walking along the Border,
Body alert, but his mind wandered,
His eyes boring into the enemies’,
But seeing into a long lost memory.

His fingers gripped the gun,
Body cold and numb,
Seeing her angelic face, in a pool of light,
Playing with his children, the memory still bright.

He remembered his father’s face,
Grey eyes, with a cold gaze,
His mother’s proud stance,
As she threw him a final glance.

He shivered in the cold wind,
The enemies’ barrels facing him,
His companions at his feet,
In cold blood, he could sense defeat.

As he pulled the trigger,
Their bullets ripped through him, like daggers.
He saw his life flash past him,
All in a whirlwind, blurry dim.

And as he lay on the cold ground,
He pulled the pin out of the bomb,
His lips moved in silent prayer,
Not a thing moved, not even a hair.

As the silver beams shone down,
He felt like a king, halo adorning his crown,
And just as the brilliant light shuddered,
“Jai Hind!”, were the last words he uttered.