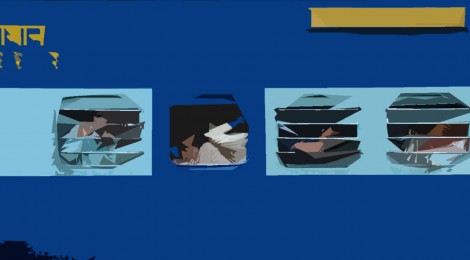 The hard metal compartment of the Kanpur-Kasganj Express had lost its dimensions as more and more people squeezed their belongings into it: footwear, utensils, bundled clothes and earthen ware. Squatted by the window, Sukanya sucked in some air, rummaging her eyes over barren land running up to a point of travelling mellow sun held in place by iron window-frame.

The train started and she let her thoughts loose over the sill until they brought back tears and wetness over her cheek.

An old man pressed his shins to her back as she felt a tingling down her chest. She could sense his hovering gaze over her and she adjusted the covering of her sari.

“Some problem?” asked the man in faded blue jeans, a decibel over the chugging.

The scenery outside had started to blur, bringing in cooler air. People sleeping, sitting, standing, eating, burping and snoring let out a collective ‘ah’. Shifting her weight from one leg to the other Sukanya first chose to remain silent. But if this long journey and its outcome were to get any better, she’d have to make some effort, she thought. So she said, “I’m just thinking about home.”

“Where are you going?” asked the man.

“Where are you going?” she spat out unexpectedly even to her self.

“Jhansi” he said calmly, teetering his grip on the swing of a train handle, as if deciding to take the conversation further with her or not.

Somewhere, fowls in a wicker basket began fighting. Feathers and shit flew off the torn peepholes of the container, overriding even the smell of perspiring human flesh.

The old man moved a step back allowing for air to pass between them and Sukanya could feel two thick lines of coolness over her back, where his shins were earlier mounted.  It strangely indicated a new kind of assurance.

“What’s bothering you?” he asked her again.

The wetness on her face had dried by now. “My bastard husband, the good-for-nothing drunk beat me up every day of my life..”

“For 16 years …with sticks, rolling pins, broken bottles, brooms, knives, sickles, anything that came into his hand and if not those then his bare fists alone. He even tried strangulating me, burning me… This was yet fine. I survived. But then he started beating my daughter. I couldn’t take it.”

Two men amidst the entwined human mass of bodies got into an ascending diatribe over foot space. The old man pressed his shins closer again, bending over to hear her as Sukanya tightened her body and averted her glance from the mayhem at the train door, “Can you help me Sahib? In any way? Give me work. Recommend me to someplace. I can cook, clean, do housework, help in a shop or even carry load.”

“Where is your daughter now?” he asked.

“She was in love with a boy from the adjoining village. My husband detested this and that’s why, in a spur, I encouraged them to run off… today.”

“…someone saw me packing her off –one of his drunk friends — and I knew we would be in big trouble. My man still has clout in the village. He would come after me and kill me and not even get punished for that.” Hot tears strolled down her.

“I have only one living child. Three were born dead, and two were miscarriages. .. no one else besides my daughter … and with her gone I have nothing.” She thumped her chest.

“What must your husband be doing right now? This very moment? Looking for you, chasing after you?”

“I have never run away before so… He might drink himself to death and do nothing or if he is needs to vent out wrath he may come looking. It all depends what reaches his head first,’ she said, hard-slapping her palm over forehead, ‘the alcohol or anger. But he can’t harm my daughter. She and her new husband must have reached faraway by now to a distant town…”

“Why didn’t you go with them?”

“There wasn’t such time to think, Sahib. My daughter left in the dark before dawn in one direction and I went off this way’, she arched her hand, ‘in the other direction, towards the tracks. I wasn’t even sure where I would go or what I should do when this train arrived and…Can you, please, help me, Sahib?”

The old man crooked his neck low and looked out of the window thinking about the arriving town of Jhansi where he was due for a promising job after living for long on meager resources in a village, not too far from the woman’s village, who sat by his feet.

The evening was dissolving into twilight. Droves of birds plunged into dimming sky, homeward. We have to be brave. The trudge continues, he thought.

“Next is my stop”, he said, more to himself.

Sukanya hesitated, “Can I get down with you? Find me work, anything … I don’t want to go back.”

The train screeched on its rails and people began pushing in hordes against the old man, readying themselves for the alighting. A child buried thick in the layer of limbs somewhere, cried shrilly.

“What if we hadn’t met?’ said the old man, jostled about, ‘what would you have done then?”

“I would get off when I felt I could go no further or when hunger drove me insane …and go looking for work.”

“Then you might have to do just that” He pressed his feet to resist the force of the pushing mob and dug into the corners of his cloth bag. With warped fingers he pulled out something. Opening his grip, it turned out to be a banana: half exposed, black and sticky. He urged her to take it as a thin film of glaze crossed over her eyes.

She was the perfect picture of sensuality, misery, hardship, loneliness, courage.. This is how you met the muse on a train.

He could see the beginnings of a long saga inside his head. All his life, being a columnist of a small newspaper, writing word-limited stories of artificial wonder to supplement his journalistic income, he had sapped dry, growing as tired on his withered chair, as his stories had got onto him – bronzed creeper-like.

And now, once again he felt something crackle up inside, insidiously, like the realization of love, the first blossom of rain on sizzled soil, bursting forth to be want to be told, in a crisp persistent voice, … of a troubled middle-aged woman running away. What a poignant story it could be, if welled up further, and what a sad one.

The mob pushed him out of the compartment.

He walked on the cold platform buzzing with furor: the hush of rushed traveler, hail of tea and snack vendor, yelp of long-waiting relative. Bathed in moonlight a spring attached to his step.

Sukanya watched him go through a film of brimming water, through the train window.  He did not look back once or stop at the platform.  She peeled the fruit he gave her and bit into it, its mulch tasting buttery, foamy like her anger. She spat in his direction, the overripe pulp dripping like stalactite onto the window bar. Then squashing the remaining fruit in her hand, it squelching between her fingers she felt the burn of hunger knot inside her and recede for the time being, giving into a relief of sadness and blankness.

She had nothing to lose, and yet this man had managed to take something away from her.

What all she must have, if she can’t even see it?, she thought.

The train tugged and pulled, at her, all over again.