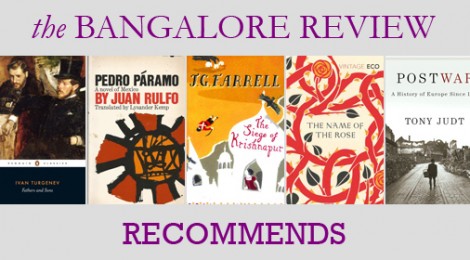 September, 2013 · by The Editorial Team · in Columns, TBR Recommends

1. Fathers and Sons (1862) by Ivan Turgenev
This novel, penned by Ivan Turgenev in 1862, is considered as one of the best ever to come out of Russia. This is certainly high praise when one considers other Russian masterpieces like Anna Karenina, Dead Souls and The Brothers Karamazov. Arkady Kirsanov a fresh graduate from the University of Petersburg is returning to his father’s estate. He brings along a friend of his, Bazarov. Bazarov’s philosophy of ‘nihilism’ upsets the rather placid life in the estate. He rejects any form of authority, be it state, church or family. Turgenev is credited with the invention of the term nihilism and Bazarov is considered to be its first representative in literature. The book captures the key intellectual debates among the Russian intelligentsia in the middle of the 19th century. It critiques both orthodox nationalism as well as radical socialism. In fact this book created a huge uproar against Turgenev in Russia. The orthodox nationalists thought that he was glorifying nihilism and its emphasis on the rejection of all institutions. The radicals thought that he was ridiculing them. This refusal to side with any ideological viewpoint was typical of Turgenev. His loyalty was to the pursuit of truth and literary excellence. His prose is sublime and at times lyrical, making him one of finest stylists of Russian literature along with Nikolai Gogol.

2. Pedro Páramo (1955) by Juan Rulfo
“There is wind and sun, and there are clouds. High above, blue sky, and beyond that there may be songs; perhaps sweeter voices… In a word, hope. There is hope for us, hope to ease our sorrows.” Haunting and riveting, Rulfo’s Pedro Paramo is a story of hope or rather, of lost hope. There are, however, many layers to it, layers that uncover as the characters unravel themselves. The novel follows two narratives: one, in first person, the narrative of Juan Preciado who visits the ghost town of Comala in search of his “mother’s husband”, Pedro Paramo and the other, a flashback in third person of the exploits of Pedro Paramo in the beautiful, luscious town of Comala. Beautiful, yet sad, this short novel is one of the finest in Mexican literature. It precedes and trumps other more celebrated works of magical realism. Read it once and you will read it again, for all its meanings do not open up on first touch.

The Siege of Krishnapur is a Victorian tale written with a 20th century consciousness and  therefore inevitably full of irony and black humour. Set during the events of the 1857 Indian Sepoy Mutiny, the town of Krishnapur is under siege, and the British residents  retreat into the Governor’s house where they are forced to fight for their survival. As the siege continues, conditions quickly become intolerable in the Residency and the Victorian protagonists start to wilt and reach their breaking point. This setting provides ample opportunity for Farrell to gleefully tear into and expose the contradictions of Victorian morality and attitudes, the “civilizing mission” of colonials, and the notion of their superiority over the native culture. Farrell himself considered this “a novel of ideas”, but it can also be read as a adventure story, not to mention it being rip-roaringly funny. It won the Booker prize in the year 1973.

If the Da Vinci code is a pop tune then The Name of the Rose is a Mozart symphony. Both are detective stories where clues are unearthed through deciphering secret symbols and coded manuscripts, where arcane religious intrigues and allusions to historical figures are used as plot devices, but this novel is vastly superior and much more intellectually satisfying. It is a perfect blend of philosophy and history masked as a murder mystery. Central to the story are also the themes of humour and laughter, heresy and the nature of truth. Read it to find out how the solution to the  murder mystery depends on the contents of Aristotle’s  book of comedy, a treatise on the nature of humour, of which no copy survives. Also use the opportunity to  mull  over statements like these: “Perhaps the mission of those who love mankind is to make people laugh at the truth, to make truth laugh, because the only truth lies in learning to free ourselves from insane passion for the truth.”

5. Post War (2005) by Tony Judt
If you ever wondered how present day Europe,with its culturally vibrant democracies (think France) and strong economies (think Germany) emerged after the devastation and destruction of World War II then this is the book for you. Though being a work of exemplary scholarship, the prose is lucid and the narrative style keeps the pages turning. History was never more interesting with Czech plays to Radio Free Europe and English football all being seamlessly intertwined. Judt was a Public Intellectual, Professor specializing in European history at NYU and frequent contributor to New York Review of Books. He died of Lou Gehrigs disease in 2010. Many consider this to be his masterpiece.