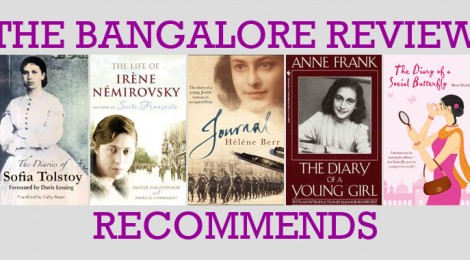 I love yesteryear documentations, as also biographies and memoirs. Here are five of my personal favourites.

1. The Diaries of Sofia Tolstoy

Sofia Tolstoy? Tolstoy’s wife? Wasn’t she a nag?  The book, The Diaries of Sofia Tolstoy told me otherwise.

These diaries written meticulously for over more than half a century, right from when Sofia Tolstoy was 18, and combined with her late-in-life hobby of photography, documents her life with the great writer. It also shows us the changes in the pre-Czarist Russian country over this period, and Tolstoy’s relationships with the various people around him. This book is different from Sofia’s memoirs, which is titled My Life.

Sofia had met Tolstoy, her senior by 16 years, when she was 18, and married him after a week of engagement in 1862. Their life began with a bouncer, when Tolstoy gave her his diary jotting his pre-marriage affairs with serf women, including the fact that he had a fathered a child which was still living on his estate. Sofia but seems to have been a brave one and had a good life with Tolstoy, co-managing the 4000 acre Yasnaya Polyana estate, where she lived till she died in 1919. She had borne him 13 children, 8 of whom survived.

Sofia comes across as a sensible, sincere, gifted and capable woman who was Tolstoy’s muse, creative assistant, copyist, agent, translator and publisher. The general impression of Sofia as a mercenary and Tolstoy’s marriage to her as martyrdom dissolves as we turn the pages of this book. Here is an industrious woman, responsible mother and supportive wife, which facts show up in her pen portraits rather than her saying so. The general assumption of Sofia Tolstoy’s character as a shrew, a spoilt noble, seems to be based on the very final year of their life together, when Tolstoy’s leanings towards the spiritual and his abhorrence of comfort in life clashes with that of Sofia’s. And this latter image of Sofia seems to have been propagated by a coterie who tried to establish that they were closer to Tolstoy than his wife, and consequently suppressed all evidence in favour of her.  There are umpteen excellent portraits of such characters in the book which show what an excellent writer Sofia herself was.

Sofia seems to be quite conscious of how women give up their talent to nurture their partner’s interest and caring for a family. Here is a quote from the diary for the date 12 June 1898.

“I was wondering today why there were no women writers, artists or composers of genius. It’s because all the passion and abilities of an energetic woman are consumed by her family, love, her husband – and especially her children. Her other abilities are not developed, they remain embryonic and atrophy. When she has finished bearing and educating her children her artistic needs awaken, but by then it’s too late.”

It’s a big book, and an insightful read. Yes, there is an added incentive of a foreword to the book by Doris Lessing.

2. The Life of Irène Némirovsky

Irène Némirovsky was a Jewish-Russian born French novelist who died at the age of 39 in Auschwitz, Nazi Germany-occupied Poland. She was arrested by the Nazis without taking into account her conversion to Roman Catholicism. A major author who published 14 books during her lifetime and eight books posthumously, her work is considered powerful. By 1940, in spite of her laboured attempts to hide her origin, she could not publish in Paris and faced the Gestapo.

She is but best known these days for her recently published unfinished manuscript, Suite Française, two novellas about life in France between 4 June 1940 and 1 July 1941, the Nazi occupation period of Paris. These works written during the actual period itself, are not mere journals of events, but very reflective, and hence consider in high esteem. The manuscript was with her daughter for over fifty years, who did not bother about it, thinking it a journal of sorts, and a painful read. But when she gave it up in 2004, it went on to be a real best-seller and into translations in some forty languages, even winning the Prix Renaudot posthumously, a first in its history.

The book I recommend here is a biography of Irène Némirovsky, and compiled painstakingly by Olivier Philipponnat and Patrick Lienhardt from her unpublished personal documents and from conversations with people connected to her. The original is in French and translated to English by Euan Cameron, and it’s impossible not to feel drawn in deeply to a most beautifully sketched biography weaved from archival material which had not been visible before. The author’s initial years in Ukraine, her difficult relationship with her mother, their move to pre-WWII Paris and life there as a Jew, the anti-Semitism of the days, their conversion to Roman Catholicism to escape persecution and of course the ultimate tragedy. I cannot but quote from what’s given in the book as her last ever written words, on the 11th of July.

“The pine trees all around me. I am sitting on my blue cardigan in the middle of an ocean of leaves, wet and rotting from last night’s storm, as if on a raft, my legs tucked under me. In my bag I have Volume II of Anna Karenina, K M’s Journal and an orange. My friends the bumble bees, delightful insects, seem pleased with themselves, and their buzzing is deep and solemn. I like low, solemn voices in voices and in nature. The shrill ‘chirp, chirp’ of the small birds in the trees get on my nerves. In a moment or so I will try to find the Hidden Lake’.

From Tolstoy’s wife’s diary to a writer’s biography, whose final words include Tolstoy’s book.

This ‘French Anne Frank’, placed herself in history and literature by her documentation of Nazi occupied Paris through her diaries. When this Sorbonne graduate met death at Bergen-Belsen concentration camp in 1945, she was only 23, and it was just days before the liberation of the camp. The Berrs are Anglophiles and the diary is mostly in English and some in French.

The narrative is very apolitical and surprisingly mature as a literary report; it’s an intense documentation of her life from April 1942 to March 1944. Initially she comes across as someone who is full of life, as a girl of her age would, with music, literature, love and parties. But soon her life gets to be one of harrowing anguish, very similar to the one in Irène Némirovsky’s Suite Française, I found more than one reviewer quote the close connection.

Yet, there is a thread of hope that never loses its way in her writing and she keeps saying why she writes the journal. “I write to show people later on what these times are like.” Her reactions to being obligated to wear the infamous ‘yellow star’ are very interesting and documents the discrimination and horror of the times accurately. The Journal is also perceived as a document of denial, of not perceiving what was going on before her eyes at Auschwitz in almost Sophoclean irony as Davis Bellos says later in the book.

4. The Diary of a Young Girl: Anne Frank

The book that needs no introduction, but one which changes for me each time I read it.  And this note is something I have published before about re-reading Anne Frank.

I met Anne Frank in my teens; I was the same age as her on the text, and about four decades apart on the calendar. And I read through the night, fascinated by her life. I was thrilled to read her encounters with the awakening of sexuality and lamented that four decades ahead, boy-friends and dating still were forbidden words to me and not even concepts to my world. I was moved to tears at what happened to Anne at the end of it all. And she took up a place among my favourite books on the shelf.

I re-read Anne Frank’s diary several times over the teenage years. When I left home to join my first job, Anne Frank was left behind. I was then twenty.

There was a gap in my reading habits for an interval of about a decade. And when books came back in pursuit of me, I shifted loyalties. But when I was making a list of books for my office library and was asked to include some ‘must-reads’ for children, Anne Frank came back to my life and reading.

The next year Anne Frank’s Diary was published in translation in Malayalam. Anne Frank was now a child to me. But the innumerable films made around the holocaust made me see and empathize with Anne Frank more clearly. I now saw the larger realities behind the adolescent perspectives grow broader.

I am thinking of a new translation of the book into Malayalam. And I have bought a new copy of the uncensored version of the book, to strengthen my project.

5. The Diary of a Social Butterfly by Moni Mohsin

This is fiction, but it’s as close to reality as possible, and such a clever satire that one is almost deceived into thinking it’s a light chic-lit piece.

Butterfly is someone ‘everyone knows’ and she lives in a big fat kothi with a big fat garden in Gulberg and is all ‘sophisty’. Her whole life is a frenzied party filled with good food, gossip, and flashy dresses. Her banes? The Old Bag and the Gruesome Twosome, who are her ‘in-laws’. And she fills her diary with her life, beginning with two different headings each day. One is a political statement, that’s for her dear ‘Janoo’ and the other for herself. This is elaborated on, and the seasoned journo’s perspective comes through in layered observations albeit in the drags of light hearted banter.  See this one.

Mullah Omar flees Kabul
Why, asks Butterfly, did he not go to the mountains and become a ‘gorilla’

Her misspellings are hilarious, vagina (angina) to brain haemorrhoids to buttocks ( Botox) to Bangcock (Bangkok).  But this is no chic-lit. Beyond the goofing around, there is this hidden portrait of worrying minds, of a people worrying if they are headed for doom. Irony and satire layers every word in the book. Benazir’s assassination features in the last page of the book, and Janoo and Butterfly share their grief there.  I could re-read it any day.

[Every month, The Bangalore Review recommends a reading list, also mentioning in brief why each book must be read. This month’s list has been compiled by writer, Suneetha Balakrishnan.]