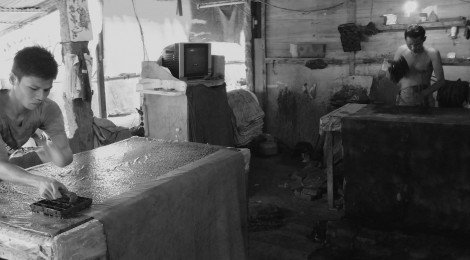 Tissue of no seam and skin
Of no scale she weaves this;
Dream of a huntsman pale
That in his antlered
Mangrove waits
Ensnared;

And I cannot touch him.

This is the first stanza of the poem, Batik Maker by Virginia Moreno. At first reading, with the title hovering at the upper corner of vision, it seems as though the poem is about a batik artist, and her lost love. Batik is the ancient art of decorating cloth using wax and dye and the word batik is believed to have originated from the Javanese word tik meaning to dot. The process involves selectively blocking areas of fabric with wax and dyeing the fabric, usually cotton or silk though batik is also done on wood and ceramic.

As someone interested in the art of batik printing, could I look at the poem differently? Is the poet talking about the Batik Maker’s efforts in translating her design onto a piece of fabric or is it about her angst at losing her love in the wilderness of life? What about interpreting it as if the poem was about process of batik rather than recounting the sadness of the Batik Maker? And so, I read it again, trying to make that connection.

The first steps in the process of batik making involve washing the fabric and copying a design on it. Then the cloth is mounted on a wooden frame. Brushes are used to cover large areas that do not need to take on colour or needs a darker hue. Specialised instruments help trace out the outline, which usually is the base colour, most often white, and add finer details.

Turning now to the poem, the first lines say, Tissue of no seam and skin; Of no scale she weaves this. Maybe the lines refer to a long piece of unmarked cloth, stretched out, ready for the painter to start the process of embalming areas that do not need the first wash of colour, in hot wax. Subsequent lines in the stanza seem to point out the design on the fabric as a huntsman going about his business of hunting for prey in a wooded area.

As the first stanza concludes, we come across the word, Ensnared—just one word to conjure up a multitude of meanings—and how beautiful a word to describe the next step in the process of creating batik.

After the wax is applied to resist the absorption of colour in places where another colour from the colour wheel may have to applied or where colouring is not required, the fabric is dipped in the first dye bath to acquire the hue it must take on. Yet, in this process, the wax crackles, creating a crisscross pattern across the fabric, a web of coloured lines that ensnare the huntsman within an unexpected net. However, the clever Batik Maker has already accounted for this effect; she already knew her huntsman’s plight and she was counting on the web to tell the story drawn up by her.

The poet ends with a standalone line, “And I cannot touch him”. A poignant line which could be a lament for a loved one, or as we look at it from the perspective of the craft, the Batik Maker cannot yet touch the design on the fabric since it is still shrouded inside the now cold and stiff wax.

And I cannot wake him

The application of wax is a tricky affair in the process of batik printing. If the simmering wax gets too hot, there is the danger of fumes and even fire, a dip in temperature would mean risking the possibility of wax not penetrating the fibres resulting in a mish mash of colours when the cloth is dyed. This is the challenge for the artist who practises the art of batik printing.

The Batik Maker whose hunter is now ensnared inside a tangle of crisscrossed lines, now prepares for the next round of waxing and colouring. And here again, the usage of the word, “ensnared” along with unsaid connotations to the stiff waxy shield seems to play a larger role in describing the print taking shape on the cloth. The huntsman has now become the hunted, lying cold and stiff, deaf and dumb to the world, his throat parted in surprise, lying amidst orchids, his last cries heard only by birds.

And what kind of birds, not crows or even parrots, witnesses which could be formed with maybe a couple of infusions, but birds of paradise. Clearly, the Batik Maker is no amateur, but someone used to playing with colours to paint dazzling birds and exotic flowers using the resist method of batik printing. The stanza ends with the refrain, “And I cannot wake him”. Indeed not, since we know the piece is not yet finished, more layers of wax to protect the colours already on the fabric, more dye baths of colour to be prepared before the design of the Batik Maker is revealed.

Shades of light and shapes
Of the rain on his palanquin
Stain what phantom panther
Sleeps in the cage of
His skin and immobile
Hands;

And I cannot bury him.

One of the ways of ensuring that the applied wax has indeed penetrated the fabric is to hold up the fabric against light. If the waxed portions are translucent, with a see through quality, it means that the wax has penetrated the fabric well and is capable of holding the dye within defined contours. But if it is opaque and sits like a blob, the wax was not hot enough to penetrate the fabric, and without a boundary, colour would run through, ruining the design. In such cases, wax has to be applied again.

Perhaps the Batik Maker sees the blobs in her design but does not want to re-wax the areas. Her experienced eye has seen another possibility that would enhance the beauty of her creation. And so, we have raindrops of colour falling on the dead hunter as his killer sits nearby.

The poem ends with, “And I cannot bury him.”

Now that the design is complete, it first has to be dipped in hot water and ironed out to remove the layers of wax before the print is visible in its entirely. Maybe it would be framed and put up on a wall or maybe sent to a distant shop for a connoisseur to arrive and recognise the efforts of the Batik Maker who created it.

Note: Virginia Moreno, a celebrated writer from Philippines is renowned for her ability to use content and form to create imagery in her work, allowing readers to conjure up multiple interpretations. The format of the poem, Batik Maker and the atmospheric images painted by her alert us to the possibility of layers not immediately visible. In the write-up above, I have attempted to tie my understanding of the poem with the art of batik even while being aware of the meanings that I might not have grasped fully.