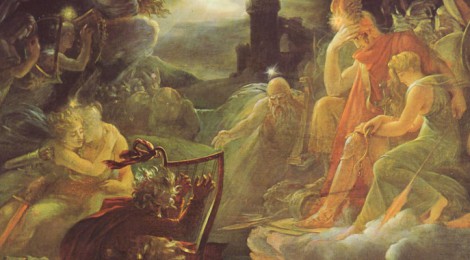 [This article is first of a two-part essay on Irish Mythology. The first may be accessed here.]

Of all our myths the myth of sovereignty stands at the core of our mythology. It was known as the banais rigi or banfheiss meaning ‘woman feast or sleeping feast.’ It tells of the power of the goddess or ban dea or caillech in conferring kingship. Unless the goddess conferred sovereignty, the king was not a proper king. The goddess was sovereignty and only through her could the king claim legitimacy.

I will tell you, gentle boy,
with me the high-kings sleep;
I am the graceful slender girl,
the Sovereignty of Scotland and Ireland.

Sleeping with the mother goddess resulted in Lugaid Mac Con of Munster and Niall of the Nine Hostages of Leinster becoming High Kings of Ireland. Reference to this rite is also found in Roman Mythology where the oracle to the Tarquins prophesied that the conquest of Rome would be achieved by the one who would first ‘’kiss’’ his mother. Oedipus, from Greek myth became king after killing his father and sleeping with his mother. The ‘’Oedipus complex’’ is at the heart of psychoanalysis.

A function of folklore is to reduce such a myth to a common understanding without diminishing the substance of the meaning. The story is told thus: a young man meets an old woman in a wood and mates with her; she turns into a young woman and confers sovereignty on him. As a result he becomes a king and is accepted as such. As an old man he is in a wood where he meets a young woman, he mates with her; she turns into an old woman and kills him.Thus life and death resided with the goddess.

The old woman or hag is also known as the ban sídh or ‘woman of the mound’ and it is in the mounds that the spirits of the dead are said to survive. The word ban sídh is now more commonly written as the ‘banshee’. She is a harbinger of death and appears or is heard prior to the death of certain families. She may be seen as the other side of the goddess as young woman. Thus the goddess has the power of life and of death.

My mother never forgot a verse about the banshee which she heard as a young girl in Wexford; the verse is as follows:

Hushed be the banshee’s cry,
Unearthly sound
Wailing one soon to lie
cold in the ground.

The folklore commission of Ireland recorded many stories concerning the banshee in the 1930’s and these are a substantial record of her survival into the 20th century. In the 1970’s a student told me that on his way home to the country from the city and having left the train station on his way to his parents farmhouse, he heard a wailing sound which made the ‘hairs on his head stand up.’ When he arrived home he found that his mother had just passed away.

Thus the supernatural being known as the ban sídh or caillech has the power of life and death over mortals. However in time the word caillech was used pejoratively to mean ‘hag’ ‘witch’ or ‘crone.’With the spread of Christianity, pagan Ireland was understandably vilified, as in most cases when one mythology takes precedence over another, the rites, symbols and customs of the weaker system of beliefs begin to decline. One possible exception to this is the relationship between Shintoism and Buddhism in Japan where both systems have been allowed to flourish.

One powerful symbol of the caillech is the Síle na Gig more commonly known as the Sheila na Gig, and this figure may be connected to the sovereignty rite mentioned above. Sheila na Gigs are a group of female stone sculptures found not only in Ireland but also in Britain and France.The sculpture is a nude figure, represented face on, with legs splayed and with hands placed behind the thighs with fingers opening the vulva. She is generally regarded as a stone fetish representing a woman, supposed to give fertility. Some Sheila’s have holes in them and these are regarded as part of the rite. There are about 75 of these sculptures in Ireland, 21 in England, 7 in Wales and 3 in Scotland. At a later date they were incorporated into the walls of churches and castles as a ‘ward against evil.’ For a long time many were confined to the crypt of the National Museum in Dublin but for the past twenty they have been allowed out into the sunlight.

If there was a church in pre Christian Ireland it was the bile or ‘sacred and venerated tree,’ which was the temple or altar of our pagan ancestors. Under these trees, chiefs were inaugurated, and they were at the centre of tribal meetings fairs and ritual gatherings, not to mention the aenach’s or fairs.Placenames from the north east to the south west or from Antrim to Cork confirm the spread of their influence, such as the townland Billy in Antrim and Aghaville (‘the townland of the tree’) in Cork. The ‘cult’ of the tree was a countrywide phenomenon. They stood at the places of tribal assembly. These trees were of ash, oak, yew and hawthorn. Some were cut down as a consequence of the zeal of Christian missionaries, and no better example than the cutting down of an oak sacred to Thor at Geismar near Hesse in 723 by St. Boniface ‘the apostle of Germany.’ Others were raised to the ground as a result of inter-tribal warfare. The influence of the sacred tree was demonstrated by the fact that the greatest insult which could be inflicted on an enemy was the desecration of the sacred tree at the inauguration place of his kings. Thus the inauguration tree of the Dál gCais at Mag Adhair, now Moyre, near Tulla Co. Clare was according to the Annals of the Four Masters ‘cut after being dug from the earth with its roots’ by Maelseachlainn of Meath, king of Tara in 980A.D. This date also lends credence to the persistence of the inauguration ceremony long after Christianity had taken hold in Ireland. When in 1099 the craeb tulca or’tree of the mound’ was cut down in Antrim by the O’Neill’s of Tullaghoge, the offending family uprooted the sacred bile’s of the O’Neills at Tullaghoge in 1111.

As there were as many as one hundred local chiefs in Ireland at the beginning of the 12th century, we may assume that there were many sacred inaugural trees throughout the land. The archaeologist Barry Raftery said that ‘the bile leaves no trace in the archaeological record but we can assume that this custom [inauguration of kings] is of pagan Celtic origin, for there are clear indications that it existed in Gaul in the pre Roman Iron Age.’

Hail to thee, O hill yonder: at thy fall I am not joyous; thy brown thorn is a cause of woe, the smooth stem that was wont to be seen above thee.

The thorn of concourse, a torment to all, I used to see as a place of assembly: the cutting of the branch, my day of sorrow! the state of the land is baser thereafter.

A possible reason why early Irish history is often regarded as pseudohistory is that the Irish like the Celts of Europe left no written records, and thus much of our early history is reliant on Greek and Roman historians. The Irish had a strong oral tradition which still persists, and Christian monks in the 6th and 7th centuries through their monastic schools committed this ancient lore to manuscripts. From the 8th century this body of work outlined the structure of society, its myths and laws back to preChristian times. And the late Iron Age of preChristian times supplies much of the text of our heroic age. So the aspect of harmony found in the Bronze Age is dimly perceived from the distant past whilst the arrival of the warrior in the Iron Age is the stuff of many of our legends.

Of all the Iron Age heroes we possess, Cú Chulainn is the most famous. This Ulster Iron Age hero, defending Ulster against the men of Ireland – [the Gaels from Spain], is eventually transformed into the spirit of Irish resistance to English colonial rule.Cú Chulainn’s re-emergence as part of the Irish cultural renaissance of the late 19th century is expressed both on stage, in literature and in the anti-colonial militarism which used the myth of Cú Chulainn to dynamize the movement towards independence.

Cú Chulainn who died about 15BC is at the centre of the Ulster Cycle of our prehistory. Sagas from this time include the great romantic tale of Deirdre and Naoise and the Taking of the hostel of the Two Reds [Togail Bruidne Da Derga]. The tales from the Ulster Cycle are based between the forts of Emain Macha two miles west of the city of Armagh and Dun Dealgan less than a mile west from the town of Dundalk.

They tell the tales of the last years of the Picts or Dál nAraide prior to being subsumed into the Gaelic order under the O’Neills in the 4th century.

Following the Ulster Cycle there is the Fenian or Ossianic Cycle and this is set in the reign of Cormac mac Airt, who is said to have reigned in Tara in the third century of the Christian era. They are based upon the hero Finn mac Cumhail who lends his name to this cycle.From the 13th century these tales were translated from the manuscripts and slowly entered our culture through the work of poets and bards, and in time, from the written word, the oral tradition evolved. Many of these works are contained in works known as the Duanaire Finn or the Lays of Finn; these lays are poems which were sung. Many of these lays were written or rewritten in the early 17th century and translated into English in the late 19th century. The Ossianic cycle became popularised with the work of the Scottish writer Mc Pherson and influenced the Celtic revival of the 19th century.

With the arrival of the Gaels and later Christian missionaries, a patriarchal structure was imposed on Irish society and the ‘word’ took over from the ‘womb’ and thus much of the magic and closeness to nature was diluted. This separation from nature was further extended in the 1920’s when nature studies was removed from the curriculum of primary schools.

In conclusion a poem attributed to Amergin, one of the first Gaels to arrive in Ireland from Gallicia in Spain around 300BC.

I invoke the land of Ireland
much coursed be the fertile sea,
fertile be the fruit strewn mountain,
fruit strewn be the showery wood,
showery be the river of waterfalls,
of waterfalls be the lake of deep pools,
deep pooled be the hill-top well,
a well of tribes be the assembly,
an assembly of wells be Temair [Tara].
Tara be the hill of the tribes,
the tribes of the sons of Mil,
of Mil of the ships, the barks!