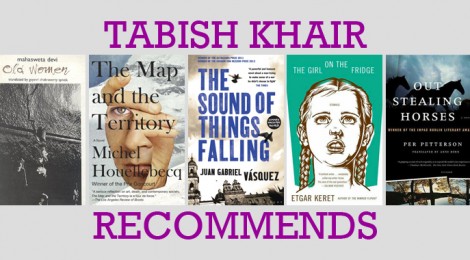 How does one recommend only five books that must be read? I tried to solve this problem by focusing on living authors: that decision, I thought, would leave out the vast majority of my favourites. But it did not help enough. I cut it down further to creative literature. This made it a bit more manageable, but I was still nowhere close to five. So, I decided to focus on living fiction writers in translation. It took some doing, but I did manage to cut my favourites down to size. So, here it goes, these my five favourite fiction books by writers who are still alive, translated into English:

1. Mahasweta Devi’s Old Women, translated from the Bangla by Gayatri Chakravorty Spivak (Calcutta: Seagull Books, 2002). One could replace this with other translations of Devi, mostly but not only those by Spivak, but if you have not read Devi, this might be the collection to start with. In her characteristically incisive style, Devi lays bare the nuances of love and nation, as passion, experience, fetish and ideology, in these two stories whose protagonists are old women.

2. Michel Houellebecq’s The Map and the Territory, translated from the French by Gavin Bowd (London: Vintage Books, 2012). Houellebecq is always worth- reading, though he can sometimes grate more than his admirers are willing to concede. But in this novel about the life and times of artist Jed Martin, everything falls into place – his powers of invention, his wit and satire, his commentary on art and life, from a certain first world perspective of course.

3. Juan Gabriel Vásquez’s The Sound of Things Falling, translated from the Spanish by Anne McLean(London and New Delhi: Bloomsbury, 2013). The protagonist of this moving novel  might hold a greater resonance for readers in India than Houellebecq’s first world artist because Vásquez’s characters are caught in a world of violence that is not unfamiliar to ordinary Indians. A literary crime noir and a psychological thriller, that delves into a Colombia of drug smuggling and public violence.

4. Etgar Keret’s The Girl On The Fridge, translated from the Hebrew by Miriam Shlesinger and Sondra Silverston (New York: Farra, Straus and Giroux, 1992). It is impossible to define what Keret does with the short story form; one can only think of what Emily Dickinson did with the short lyric form, and add dollops of politics and humour to it. To read him is to gain interesting perspectives on both the possibilities of our world, and the possibilities of the short story genre.

5. Damn. Now I suddenly have so many others crowding around to fit into this last slot. Dany Laferriére’s brilliantly hilarious How to Make Love to a Negro Without Getting Tired (French), which is the last word (and beyond) on the multi-cultural discourse and provided me with the title of my current novel; Chico Buarque’s (the ‘Brazilian Bob Dylan’) equally brilliant but stylistically very different, Spilt Milk (Portuguese), which provides a poetic, magical sketch of a century through the words and hallucinations on an old man dying in a hospital; Per Petterson’s Out Stealing Horses (Norwegian), which is a poignant and funny tale of betrayal, memory and nostalgia for a simpler life… I guess I’d better stop before other candidates come knocking!

[Every month, The Bangalore Review recommends a reading list, also mentioning in brief why each book must be read. This month’s list has been compiled by writer, Tabish Khair.]