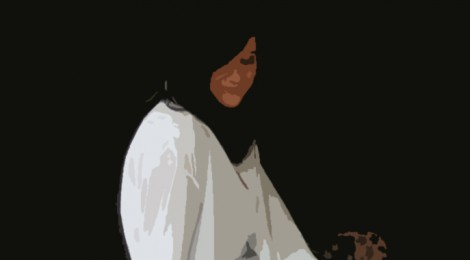 As though awaiting her lover, she is naked beneath his white button-down shirt. Outside, the dog days of August are in full swing, turning even simple endeavors into sweltering chores. Through the small kitchen window above the sink, the afternoon sun ushers in the summer heat, easily overpowering the house air-conditioning. Perspiring slightly, she leans against the dishwasher door, which feels refreshingly cool next to her skin and yields reassuringly to the pressure of her hip. She slides her moist fingertips along the uneven seam in the mismatched counter top, wondering why she can’t be the woman her man needs.

And, yet, she knows she is not what he calls a ‘woman’s liber,’ or ‘a child of the sis-ties,’ his derogatory term for all left-wing liberals. In fact, all of her life she has dreamed of becoming exactly the kind of wife he says he wants: helpmate to a strong man; stay-at-home mom; official dispenser of tender-loving-care. At times, especially suppertime, she thinks ironically, the two of them could pass for a couple straight out of the fifties, like the ones immortalized in those Norman Rockwell prints her dad had hanging all over the house when she was a kid. She, with her shoulder-length blond hair and slender body, and with her brown eyes completely engrossed in the task at hand, could be the woman in the painting, who has, perhaps, just lifted the lid on the pot releasing spirals of steam to drift upward. He, with his crew-cut and square-jawed all-American face, could be the man in the painting, standing a couple of feet away, with his eyes closed and head tilted slightly backward, inhaling the aromas.

But the painting would not show the sparkle in his eyes when they finally pop open, or the well-maintained body beneath the clothes, his stomach as flat as it was on the day he left the army, five years ago. You can’t see his sincerity or his simplicity or the way his thunderbolt green eyes shine with passion when he speaks. Nor can you see how different he is from the aesthete college types she has always dated – all of them smelling of English Leather and outfitted by Abercrombie and Fitch to match their dry, clever senses of humor. It doesn’t show how safe she feels with him, or how her head nestles against his chest, like a hand inside a glove, whenever they hug. In the painting you can’t see how her heart bounces whenever he enters a room, the same way it did the first time they met.

She had been at a lounge, having a drink with a friend after work, when he appeared at her shoulder asking for a dance. Earth Angel was playing on the juke box. He held her close in the soft light and in a sweet, dreamy, tender lilt, his voice barely above a whisper, he sang along with the song as they danced. Afterwards, her resistance shattered, she gave him her phone number. And, within three months, she had moved out of her apartment and into his.

But, in the year since, her liberalism, in music, in movies, but mostly in politics, had clashedwith his conservatism more than once, like the night at the video store, when he had made her feel like a pet on a short leash.

She had been looking at a copy of Michael Moore’s Fahrenheit 9/11, when she looked up and saw him a few feet away, staring at her intently.

“You don’t want to get that,” he said, his voice calm but firm, like a parent addressing a child.

“Why not?” she said caught off guard.

“We don’t want to contribute to propaganda like that.”

She wanted to ask him to look at it with her, with an open mind. But she held back, letting it go, not ready to make it her hill to die on. And she continued to let things go, ignoring the dark clouds on the horizon, hoping they would disappear on their own. Now, it seemed, thunder heads were massing directly above.

Last night, she had waited for the most favorable moment, while they were still entwined in each other’s arms, after making love, to tell him what she felt compelled to do. But, when she told him of her plans, his face had instantly changed, and his hand had immediately dropped from her shoulders.

“No you’re not,” he said, as though the matter were settled.

“I have to, John. It’s something I believe in.”

He swung his legs over the edge of the bed and sat up. “I don’t care. It’s something I don’t believe in. And you know that. I told you that from the beginning, Kay.”

She stared at the rough topography of his back. His shoulders were wide, like a swimmer’s, without a hint of sag in them. If he would just say her name or reach for her hand, she knew she would melt. Tenderly, she placed her hand just below his shoulder blade. But, as though repelled by her touch, he got up and walked to the other side of the room. He sat on the bench by the dressing table and reached for a cigarette.

“I’m not going to be with a protester. Somebody like one of those losers back in the sis-ties,”  he said, his teeth clenching down on the word.

“I’m not a loser, John. I love this country as much as you do.” She noticed that the clock on the night stand, apparently malfunctioning, was blinking persistently.

“Then don’t do it, Kay.” She saw the tip of his cigarette flare in the dark.

“I’m doing it for the sake of the children I will one day have – the children I thought we were going to have, together. I want them to know that I didn’t just sit around doing nothing.” When he didn’t respond, she knew, with a sinking feeling, they were in different camps, now – the whiskey-colored carpet as formidable as a river flowing between them.

“John, please don’t let this break us up. Please try to understand. It’s not the soldiers. It’s the war.”

Her heart told her to give up everything, even herself, to keep him. But, she couldn’t make herself get out of the bed. She wouldn’t grovel.

“I won’t be with a protester,” he said again. He put out his cigarette, and went into the second bedroom.

She waited for what seemed like hours, hoping he would return to bed. In the darkness, the broken digital clock flashed like a neon sign repeating a simple message over and over again. Finally, accepting the fact that he wasn’t coming, she reached over, unplugged the clock, and tried, without much success, to get some sleep.

In the morning, after he left, she lay, for a long while, in the absolute stillness of the house, listening to his absence. Then, needing to feel his presence, she rose and put on his shirt.

Now, as she stands by the window looking out, she wonders how many hits a heart can take before it becomes shell-shocked – like her little cocker spaniel, Midnight, whose only crime had been wanting to be free. Despite her dad’s best efforts, Midnight could not be contained. He would hop the fence or bolt out through the slightest opening in the gate. Until one day, he rushed headlong into an oncoming car. Though he survived, he was never the same after that. He wouldn’t leave the yard, even if the gate was wide open.

She glances at the snapshot on the windowsill of John, his father, and grandfather – all in military uniform. And, she sees clearly what it will mean to become a part of that family. Dissent, within certain prescribed limits, would be acceptable. But, anything beyond that would be considered heresy – and not tolerated.

She glances around the kitchen at the artifacts of their life together: the chipped porcelain table from his mother’s house; their hodgepodge collection of coffee cups, lined up like obedient soldiers, against the counter’s back splash; and, somehow dominating the scene, the tiny American Flag, secure in its holder, jutting out at a 45 degree angle from the side of the upper cabinet. She realizes she is looking at a photograph of her heart that she will never forget. A hundred years from now, if she still breathes, she will be able to close her eyes and see this kitchen.

Soon, he will return, hoping she has come to her senses. She glances out the window, picturing him coming down the walk. He is as impeccable as a military officer in his corporate uniform: highly polished tan leather shoes, pin-stripe suit, white dress shirt identical to her own, and silver tie leading, like a road, to the passion in his intense green eyes. Her body inflames as she watches him enter the room and come toward her. She feels the grating of his stubble on her chin when they kiss and his readiness as he presses against her. There is a musky scent to him, one hundred percent male, at once revolting and irresistible, like the un-fordable difference between them. She imagines herself willingly succumbing to his power, letting him have his way with her- taking her, one last time, here on the kitchen floor, as though he owns her.

After the reverie, she stands, for a very long minute, in the center of the quiet room. Slowly, tears begin to cloud her vision as she pictures, against her own will, the shock in his eyes when, in the flesh, he pushes open the door and sees the crumpled white shirt lying in the middle of the room, discarded like a garment which did not fit.